A message to those citizens who live in Maryland’s 1st congressional district and are angry about recent disruptions in their postal service: Do not bother contacting your congressman, Rep. Andy Harris.

He wants to destroy the United States Postal Service (USPS), not fix its problems.

But when it comes to a critical issue affecting his own constituents – service cutbacks at the United States Postal Service (USPS) causing severe delays in mail delivery – his silence has been deafening.

Then again, it would be hypocritical for Harris to complain about the problems experienced by the USPS. He is a staunch ally of the Trump administration in its efforts to incapacitate and dismantle the USPS and turn over mail delivery to private owners that can exploit the service to enrich themselves.

In February, he voted against a key measure that would have mitigated the financial shortfalls that the new postmaster general blames for the service cutbacks.

Retirees on fixed incomes, residents of rural communities, and small business owners are most vulnerable to degradation of the postal service.

As it happens, Dundalk, close to his district, has been especially hard hit, with lines formed around the post office as residents look for prescription medicines and retirement checks delayed in the mail. 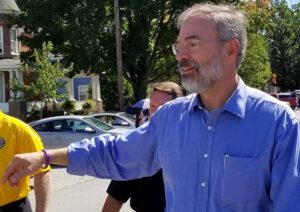 Harris appears to care deeply about the affluent people who send their children to private schools in Montgomery County. Indeed, he seems to care more about them than he cares about his own, less-affluent constituents.

The USPS is popular with American citizens, for good reason. A 2011 study of 159 national postal services by Oxford Strategic Consulting of Great Britain found that the USPS was the best in the world, the most efficient at quickly and reliably delivering the mail.

The USPS also is one of the largest employers of veterans in the country. The USPS employs nearly 100,000 veterans, approximately 15% of its workforce. About 60,000 of those veterans have a disability as a result of their military service.

So, why attack a popular agency that provides a necessary service and has a commendable record of hiring disabled veterans?

I take President Trump at his word that the immediate objective is to curtail mail-in voting in November’s election.

Proponents of privatization finally have someone in office committed to making their dreama reality. The Trump administration announced its plan to privatize the postal service in 2018.

Harris and other handmaidens of private investors in Congress have been sabotaging the USPS for years, biding their time by crippling the post office until they can muster the support to kill it.

Harris was the only member of Maryland’s House delegation to vote against H.R. 2382, titled “The USPS Fairness Act.”

No federal agency other than the USPS is required to pre-fund its employees’ future retirement health care benefits, setting aside billions of dollars in funds long before the funds are needed to pay for the benefits. It is a costly and unnecessary burden, and the primary reason for the financial struggles that allegedly are the reason for recent service reductions.

H.R. 2382 would relieve the USPS of the requirement. Despite shameless, heavy lobbying against the bill by two USPS competitors, Federal Express and UPS (neither of whom are required to pre-fund retiree health benefits), the bill had bipartisan support in the House. It was passed in February by a vote of 309-106. The bill is opposed by the Trump administration and Senate Majority Leader Mitch McConnell (R-Ky.) has refused to bring it to the floor for a vote.

The fiction used to justify privatization of government programs such as the postal service, Social Security, and Medicare is that it reduces costs and promotes innovation. The truth is that it shifts to private ownership the means to generate enormous profits, whether by delivering the mail, managing private retirement funds, or administering private insurance policies. The result would be to make the rich richer, not to provide better and more efficient services to the average American.

Privatization of the postal service would be a classic wealth transfer to the upper economic class. Good-paying jobs in the USPS would be lost as corporate owners squeezed workers and customers in the quest for profits. The price paid for delivery of mail to remote or sparsely populated areas would skyrocket; the rural poor, already a forgotten part of this country, would be hurt most.

It is important to understand the proposed privatization in its historical context. A recent book by Kurt Anderson, “Evil Geniuses,” describes how, for the past four decades, an informal coalition of big business executives, the super-rich, and right-wing zealots undermined the rules and norms that produced middle class prosperity and sharply tilted the economic playing field in favor of the upper class.

Wage stagnation for middle class Americans, and the growing and unsustainable disparity in wealth between the haves and the have-nots, are not flukes. They are consequences of deliberate policies. The privatization of the USPS is another step in the right direction for America’s oligarchs but the wrong direction for America.

Trump and his allies, including Harris, will continue their efforts to tear down the USPS in preparation for turning mail delivery over to private corporations. The postal service as we know it will disappear if they are successful. A handful of already-wealthy individuals will prosper, and the constituents in Harris’ district will suffer.