The Republican nominee for Cecil County executive won her primary in June by a wide margin, but the incumbent she ousted contends she should be taken off the Nov. 3 ballot for a suspicious date on her financial disclosure form.

County Executive Alan McCarthy (R) alleges in a recent lawsuit that Danielle Hornberger, the Republican nominee for Cecil County executive, filed a forged financial disclosure statement months after it was due.

Hornberger defeated McCarthy in a landslide during the June 2 Republican primary, garnering an overwhelming 61% of the vote to McCarthy’s 23%.

McCarthy alleges in the lawsuit that Hornberger didn’t turn in a required financial disclosure form to the Cecil County Board of Elections when she filed her candidacy on Nov. 5, 2019. The lawsuit implies the disclosure’s Nov. 5 timestamp could have been forged. 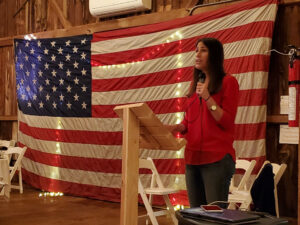 “The time and date stamp machine at the Cecil County Board of Elections is a manual date and time stamp machine which can be manually manipulated,” McCarthy’s lawsuit reads.

Walters has since left her post, the Cecil Times reported. The Cecil County Board of Elections opened applications for a new deputy director on July 29.

McCarthy further alleges that the form submitted by Hornberger didn’t even exist on Nov. 5. The Cecil County Ethics Commission approved changes to the financial disclosure statement form on Nov. 18, according to the lawsuit, a full 13 days after the document was allegedly signed.

“The presentation of the form that did not exist on the alleged date of signature on November 5, 2019 is fraud upon the Board of Elections, Department of Human Resources and Cecil County, Maryland, the voters of Cecil County and the plaintiff,” the lawsuit reads. “Ms. Hornberger’s candidacy should be disqualified because of the submission of the fraudulent filing of the financial disclosure form.”

In a July 27 social media statement, Hornberger slammed McCarthy’s lawsuit and deferred further comment to her lawyers. Her attorney, Dirk Haire, did not respond to a request for comment. Haire is the chairman of the Maryland Republican Party.

“I categorically reject the false and libelous accusations in this sore loser’s lawsuit, and look forward to the suit being dismissed just like the voters dismissed him,” Hornberger wrote.

McCarthy declined comment beyond the allegations in the lawsuit. His lead attorney is Timothy F. Maloney, a former state delegate from Prince George’s County who is a close personal friend of Gov. Lawrence J. Hogan Jr. (R).

Hornberger is the wife of Del. Kevin Hornberger (R) and worked as an aide for U.S. Rep. Andrew P. Harris (R-Md.). Endorsed by President Trump, Hornberger drew attention during her campaign for raffling a semi-automatic rifle to raise money.