Reactions were strong and divided.

Some say Hogan seems to be contradicting himself.

“On the one hand, Hogan gave authority to local officials, but not any leadership. But then he doesn’t accept a situation that he does not like,” said Sen. Paul Pinsky (D-Prince George’s). “He is cherry picking what group should get what.” 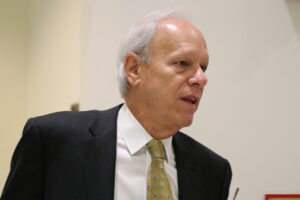 At a press conference last week, Hogan said that it is the local governments’ job to enforce public health orders. “What the county leaders wanted was to make their own decisions,” Hogan said. “They don’t have to follow our plans when deciding when to close, they can do what they want.”

But when Hogan issued his executive order Monday, in a statement, he called Montgomery County’s decision to shutter all schools “overly broad and inconsistent with the powers intended to be delegated to the county health officer.”

Public systems and private schools across the state are in the process of determining what instructional model they will adopt this fall. While Montgomery and other larger counties have indicated they will hold online classes, Hogan predicted last week that smaller systems will opt for on-site instruction.

While Montgomery County’s public schools have announced plans to hold virtual classes at least until January, the county’s order on private schools was to last only until Oct. 1, “to give people time to figure out appropriate plans and to give us time to get the numbers [the infection rate] down,” Elrich told Maryland Matters.

Even under the executive order as Hogan revised it Monday, local health officials can still close individual schools if they are considered unsafe.

In times of emergency such as COVID-19, the governor has absolute authority to issue emergency orders, which takes precedence over any county order, said former Maryland attorney general Douglas F. Gansler (D).

Still, it is unclear where the line is on how much authority local health officials have, said Maryland Association of Counties’ executive director Michael Sanderson.

Sanderson said it is also ambiguous for related organizations, such as daycare and camp, that can be shut down at the county level. Some of these facilities might also want the same blank slate that the governor has given to private schools, he said.

“To tell local governments to take responsibility and then take away their power to do their job — that’s frustrating,” Luedtke said.

But Del. Trent M. Kittleman (R-Carroll & Howard) said she’s concerned that so much power had been delegated to one top health official in each county.

“It doesn’t sound very democratic,” Kittleman said. “For one person to have that much power and to make that decision for private schools is simply wrong.”

Through his executive order, Hogan is suggesting that “public health decisions should not be made by a public health expert,” Luedtke said.

Luedtke and Pinsky expressed doubt that Hogan’s emergency order was scientifically driven, but rather politically driven to secure himself in the Republican party. After Friday’s announcement that Montgomery County banned in-person learning at private schools, the Republican caucus penned a letter, urging the governor to act.

“There is not a different science for private schools and public schools,” Pinsky said.

Kittleman did not view Hogan’s emergency order as a political decision, but instead, consistent with his general perspective that people should have a choice. 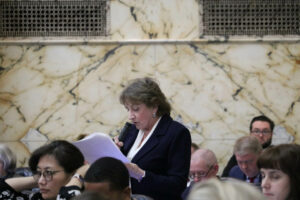 It is enough for the state to lay out the data of COVID-19 transmission rates and deaths and offer no more than guidance to local counties, she said. After parents review the data and the state’s suggestions, they should be able to decide for themselves whether they want to keep their children out of school or not, Kittleman said.

However, Pinsky criticized the state’s lack of specific “reopening metrics” for each county.

“If there are no metrics set as to what are the right conditions to reopen schools and they open prematurely, it is going to endanger the whole population,” Pinsky said.

Although keeping children at home may lower COVID-19 transmission rates, Centers for Disease Control and Prevention guidelines have also highlighted the negative impacts of extended school closure on children, especially on social and emotional development.

It is important to understand that there are downsides to both keeping children at home and bringing children back into school buildings, Kittleman said.

“The impact [of school closures] on children is more important to me than even if Hogan’s emergency order was somewhat inconsistent with his previous orders,” Kittleman said.

Gansler noted the ambiguity involved.  “In some sense, there is some politics underscoring Hogan’s decision, but also actual health concerns,” he said. “This isn’t one of those things where there is a right or wrong answer.”

Independent schools have spent the summer figuring out how to balance academics and well-being of their students, so having the rug pulled out from under them on Friday is also something to consider, Gansler said.

As first reported by the Bethesda Beat, six families in Montgomery County private schools filed a federal lawsuit against Gayles on Monday, outlining the benefits of attending schools in-person and safety measures that the schools planned.

When lawmakers wrote the provisions of law under emergency declarations, they were mostly considering natural disasters, which typically last for just a few days, Sanderson said. “I am not sure all those laws hold up perfectly in the current circumstance, where we have been in a state of emergency for months.”

“It’s breathtaking how broad the emergency declaration powers are and what comes with it,” Sanderson said.

This executive order in response to a county order is a very rare situation in recent history because we haven’t had an emergency of this magnitude, Gansler said. “It is very unusual on many levels.”