The two-word revision to the emergency order Hogan issued in early April follows Montgomery County’s decision to ban classroom instruction at private schools until Oct. 1. That decision, made on Friday, meant that Barron Trump would be unable to attend classes at St. Andrew’s Episcopal School in Potomac.

The decision generated national headlines and was immediately denounced by General Assembly Republicans and Hogan, who reacted on Twitter. The president did not address the matter directly, but at 8:03 a.m. on Monday he tweeted “Cases up because of BIG Testing! Much of our Country is doing very well. Open the Schools!”

Hogan’s revision to his April 5 executive order added “(except schools)” to a section granting the counties and Baltimore city the power to impose tighter restrictions on business activity and social interaction than the state’s.

“Private and parochial schools deserve the same opportunity and flexibility to make reopening decisions based on public health guidelines,” Hogan said in his statement. “The blanket closure mandate imposed by Montgomery County was overly broad and inconsistent with the powers intended to be delegated to the county health officer.”

Local health officials would retain the power to shut down individual schools for not following public health guidelines.

Elrich and Gayles vigorously defended their decision to bar private schools from holding in-person classes at this stage of the coronavirus crisis.

“We’re operating in a pandemic situation,” Gayles said. “We continue to see increases in cases across the country, across the state and across the region, suggesting that we do not have control over the virus to date.”

A former public school teacher, Elrich suggested that Hogan — a potential 2024 presidential candidate — “may be under a different set of political pressures.” 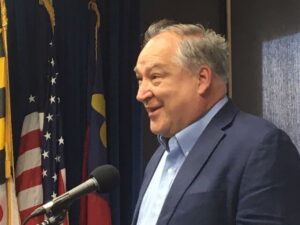 In a follow-up interview, Elrich said he’s “really disappointed with the governor.”

“His change talks about plans but it doesn’t talk about conditions,” the executive said. “He has done the thing that really bothers me — you can have the best plan in the world for conditions that don’t exist. And since he started opening up the state, our numbers have traveled in the opposite direction. And this is just one more decision that I don’t think is based on any scientific basis and could cause us more problems, not less problems.”

“That really bothers me,” he added. “There’s nothing in there that talks about caseload and risk in the context of the decision he’s making. Nothing.” 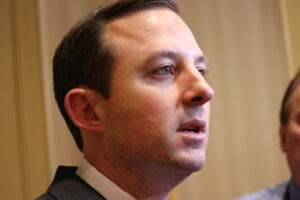 “One might think there’s been sufficient evidence that science should trump politics during a pandemic, apparently not,” he said. “Clarity and certainty are essential for Marylanders. Arbitrary, discretionary second-guessing will only worsen this crisis.”

What was unclear in the immediate aftermath of Hogan’s revised executive order is whether Elrich could issue his own executive order prohibiting private schools from holding live classes — and if he has that authority, would he choose to use it, given the potential impact on the president’s son and the many influential people whose children attend elite schools in the county.

Public systems and private schools across the state are in the process of determining what instructional model they will adopt this fall. While Montgomery and other larger counties have indicated they will hold online classes, Hogan predicted last week that smaller systems will opt for on-site instruction.

“As long as schools develop safe and detailed plans that follow CDC and state guidelines, they should be empowered to do what’s best for their community,” the governor said in his news release.

While Montgomery County’s public schools have announced plans to hold virtual classes at least until January, the county’s order on private schools was to last only until Oct. 1, “to give people time to figure out appropriate plans and to give us time to get the numbers [the infection rate] down,” Elrich told Maryland Matters.

Gayles noted that school systems in Indiana, Texas, Mississippi and elsewhere were forced to close soon after reopening because students, teachers and/or staff tested positive for COVID-19.

Every day an average of 80 additional people become infected, Gayles said; 16% of the new cases involved individuals under the age of 20.

Gayles said the county’s order was prompted by reports that some private schools were thinking about starting classes — news that led to a town hall meeting.

Elrich and Gayles said the county’s daily infection rate dropped to 40-50 cases a day prior to the state’s move to Phase 2 of its reopening plan and Ocean City’s easing of restrictions on visitors. Since then, they said, the county’s “progress” against the virus had slipped.

Gayles noted that Montgomery County’s prestigious private schools draw from across the Washington, D.C. region and around Maryland. “In these jurisdictions, we’re seeing increases in cases, which again confirms that we are not seeing lower community transmission and we have not put a firm hold on the impact of the virus,” he said.

Within hours of Friday’s announcement that Montgomery County banned in-person classes at private schools, Republicans in the House of Delegates called on Hogan to take action.

“The Maryland Board of Education has said schools can open to in-person instruction if they comply with CDC guidelines and the guardrails established by the state,” said Minority Leader Nicholaus R. Kipke (R-Anne Arundel). “Every public school administration in the state has been given the opportunity to make a decision on reopening, the same opportunity should be afforded to private and religious schools.”

”This is a blatant abuse of power by an unelected bureaucrat,” House Minority Whip Kathy Szeliga (R-Baltimore and Harford counties) said, apparently referring to Dr. Gayles.

“To threaten imprisonment for the act of reopening a religious schools is draconian and flies in the face of the religious freedoms this state was founded on,” Szeliga added.

But Gayles said the numbers don’t support reopening schools of any kind.

“Reopening is built upon the premise of having lower community transmission and lower daily case loads,” Gayles said. “That is what should be driving the decision.”

“I disagree with Gov. Hogan’s decision here. If counties can decide when our public schools can re-open for on-site instruction, then why aren’t they empowered to follow the science and exercise basic common sense on behalf of all students & teachers?” Franchot tweeted.

“The top priority must be preserving public health — without which there will not be an economic recovery or a functioning education system. This is particularly true now that we can see that the COVID-19 disease is surging throughout the country at a truly alarming rate,” Franchot added.

But the Roman Catholic Archdiocese of Washington was “grateful” to learn about the order, it said in a statement Monday afternoon, WTOP News reported. “We will continue to work with our educators and communities to ensure the safe re-opening of the schools of the Archdiocese of Washington and continue to place the health and well-being of our children at the forefront of our efforts.”

At the back of the crowd, the Moore-Miller inauguration was an important lesson for East Baltimore student leaders

Kalman Hettleman: The gift of reading and a New Year’s resolution to bestow it