Anne Arundel County officials opened a new $24 million library on West Street in Annapolis Wednesday, named for a former speaker of the House of Delegates who represented the city in the State House for more than 32 years.

The Michael E. Busch Annapolis Library is the county’s first newly constructed library in 16 years and was 20 years in the making, officials said. Although its capacity is temporarily limited by the COVID-19 pandemic and social distancing requirements, library officials hope it will one day be a community hub. 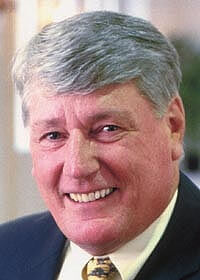 Busch, a longtime employee of the Anne Arundel County Recreation and Parks, served as House speaker from 2003 until his death last year at the age of 72. He was one of the most effective advocates for his own county during his long legislative tenure.

In addition to thousands of books, the 32,000-square-foot facility has extensive workspaces and charging stations for residents who need free access to the internet. Anne Arundel County Public Libraries CEO Skip Auld said he hopes the new library will address gaps in digital access in the county.

“This library is the first really modern library in the internet age in our county,” Auld said. “The nature of public libraries has changed. What we provide now is access to computer technology, our staff helps people getting resumes, getting job applications done.”

Auld said libraries are a “lifeline” for those who might not have access to computers or WiFi at home. He said the facility will also allow customers to check out portable hotspots and Chromebooks.

For Gloria Davis Harberts, seeing residents react to the sleek new facility was a long time coming. Harberts has managed the Annapolis area for Anne Arundel County Public Libraries for the entire life of the project, from its early planning to when its doors finally opened on Wednesday.

“We’ve dreamed about this for 20 years,” Harberts said.

Harberts noted that technology changed dramatically over the project’s 20-year lifespan. She said officials were constantly looking to modernize the building’s design, and added that the library wasn’t approached about adding charging stations to the facility until the building was underway.

Annapolis resident Jacqueline Matthews said she was amazed by the new building, and said she was pleased to see library officials enforcing masks and social distancing in the new library. She plans to bring her nephews to the library, which boasts some 16,000 picture books for children.

“There’s something here for everybody,” Matthews said.