This is the third in an occasional series on life in Langley Park, a largely immigrant community in Prince George’s County where difficult living conditions have been made worse by COVID-19 and the accompanying economic crisis.

As dark clouds hovered over the Villas of Langley Park, Lidia Rivas was about to head out for a community meeting at CASA, an immigrants’ advocacy group based in the neighborhood that coordinates campaigns throughout the Mid-Atlantic.

A grass-roots organizer since 2014, Rivas lives in Langley Park near CASA headquarters, where the meeting had been scheduled for that afternoon on the brick patio out front.

She had recruited dozens of renters with lots of things on their mind.

Langley Park, 82% Hispanic, was hit hard by the novel coronavirus, registering more COVID-19 cases than any other ZIP code in the state. During lockdown many residents had lost jobs and stopped paying the rent.

Soon it would be the first of the month, and renters were anxious.

They looked to Rivas for a plan to sidestep eviction, which had been temporarily stayed through September by a Prince George’s County Council law. That law would also stop rent increases and ban late fees.

As the storm gained force and unleashed torrential rains over the Villas, Rivas made calls and sent texts to assure her recruits that the meeting was still on. As the rain subsided and the sky slowly brightened, most on her list showed up. 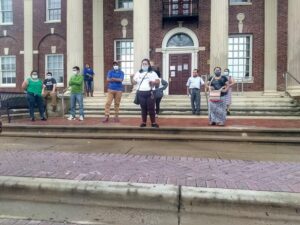 Rivas had worked hard to gain their trust, first as a newcomer by offering free Spanish literacy classes in her home, then in successive jobs with CASA, as a leader in parent workshops to help immigrants negotiate the public schools, and as an organizer on CASA campaigns for protections against deportation, and now in helping to negotiate a better deal for renters.

“Lidia has always gone out of her way to work with people in the community,” he says. “The way that pays off in organizing is when she asks them to step up and show courage, or speak out for what’s right, they see her as someone who [would] back them up.”

— Like Eddy Monteroso, from Guatemala, who Rivas taught to read and write.

When he had a run-in with U.S. Immigration and Customs Enforcement, she helped address the issue. He shared his story in a local CASA campaign.

“She’s always cared about the community, helping everyone, making a great effort,” he says.

— Like María Duque, from Honduras, who Rivas greeted in Langley Park with a welcome basket, helped navigate the public schools and advised how to respond to the bullying her son faced at school.

“She really changed my life, giving me the strength to go on,” Duque says.

— Like Edith Gregario, from Mexico, who says she turned to Rivas to resolve why the school bus wasn’t stopping to pick up her daughter. In return, when Rivas asks her to support CASA actions, Gregario has complied, without fear, despite her undocumented status.

Rivas’ talents as an organizer emerge from her life in El Salvador, where she was born in 1979, the eldest of eight children.

She grew up in Sensuntepeque, a poor farming town in the hills about an hour northeast of San Salvador, the nation’s capital.

Her birth coincided with the start of the Salvadoran Civil War.

“From an early age I remember helicopters and planes in the air, neighbors murdered,” she says. “My parents were fearful of meeting anyone on the road, and formed small patrols to keep the peace and order.”

Rivas and her brothers trekked a half-hour through the rural and rocky countryside, to attend school.

“Thankfully, we were not bothered,” Rivas says.

The family subsisted on what little they could scratch out of the land supplemented by food distributed by the U.S.-based Catholic Relief Services Caritas El Salvador program.

“It reached us each month with rice, beans, oil, flour and powder milk. Even so, we were often hungry,” she says.

By 1992, when the war ended, 75,000 people had died. The Migration Policy Institute estimates that nearly a quarter of the population had migrated or fled out of poverty or fear, including Rivas’ father, who made his way to the California lettuce fields. He lived abroad for several years during Rivas’ childhood, traveling back and forth, once he had legal documents. The family fared better with the money he earned and bought a tiny plot of land and some cows and chickens.

His residency status would be the key to getting the rest of his family out of El Salvador.

Rivas, the first born, was the last to arrive in the United States.

At 13, Rivas moved to a larger town to live with an aunt so she could go to school beyond the seventh grade. She remembers those days as calmer, a time when she could walk safely and go swimming in the river. Yet, in the last years of high school, violent street gangs or maras, began to take root, largely among boys her own age.

“These groups were fueled by abandoned youth whose parents had fled during the Civil War to earn a livelihood somewhere else,” she says. “They lived in abject poverty, and with no jobs, turned to thievery and violence.”

After high school, Rivas started college and worked at a small clothing store. She became aware of gang members who had territories around public bus stations, schools and markets.

“They would extort businesses, knock on your door, threaten you in letters or on the phone,” she says.

“Oh my God, they went on buses, demanding spare change, and we were dead if we didn’t oblige,” she says.

“They had knives and guns, and clubs and stole your things, like a pot of frijoles from my stove,” she says, relived that she wasn’t home during the break-in. “This was awful, too much.”

The situation became intolerable for her mother, aunt and younger siblings, who, through Rivas’ father in California, saw a way out and emigrated.

Rivas, then in her early 20s, was left to fend for herself.

“I was traumatized, dodging the maras,” she says. “On my way to school, I was thrown to the ground, nearly raped and pushed into a steep precipice. My screams alerted a neighbor who sent the youth running.”

Rivas says this was one of several incidents in which she narrowly escaped with her life.

No longer safe at her aunt’s house, but determined to finish college, she kept on the move, living in different places.

“I always walked around with a big backpack, with my shoes, my clothes and my books,” she says. “I did the laundry for a family in exchange for a room, and a university friend let me stay with her.” 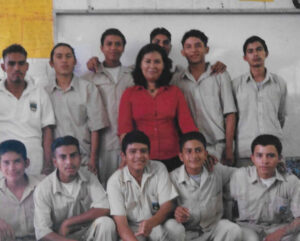 Lidia Rivas, center, in El Salvador with students during her student teaching assignment, a requirement for her college degree. Rivas family photo

Still attending classes, she juggled her days with student teaching, selling clothes and on Saturdays, visiting prisoners in the local jail with a church group that took a message of redemption, that the incarcerated could turn their lives around.

“They talked about their feelings,” she says. “We listened and pooled our money so they could buy soap and toothpaste and the small things they needed.”

After graduation in 2005, degree in hand, she got a part-time job teaching fourth-graders in a private school in Sensuntepeque. Fearing the maras, she was still living a transient life, never staying at any one place for very long.

Then in 2006 she gave birth to her first child.

Her father got the documents in order.

Finally, in 2008, Rivas and her son arrived in California.

“My father and brothers worked in the fields or drove trucks,” she says. “This wasn’t the life for me.”

So, she picked up again, this time heading for Maryland to live with her child’s father, a U.S. resident, who she had met in El Salvador and later married.

Her first job was at wine packing plant, but Rivas also joined parent groups and got to know her Langley Park neighbors.

So began her activism. 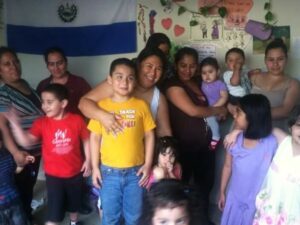 Maritza Solano, CASA’s education director, met Rivas, one of the first hires in CASA’s Learning Together Program, a bilingual initiative that helped parents gain confidence to handle their children’s schooling.

“She went well above and beyond the responsibilities she had as a parent organizer,” Solano says. “She was so well-connected to the community. She turned out numbers [to the program], always.”

“I learned from her. Honestly, it’s her nature to be so involved, and she is so unbelievably smart, and giving of her time, and that makes a difference,” Solano says.

An activist, with heart and soul

Seventy-one people showed up the night of the storm to talk about a rent strike. “It took some time to explain the concept, especially after everyone had received a letter from the Villas complex with a demand for rent,” says Rivas. “The renters tell me they are afraid, not used to striking.”

A tenants group formed to negotiate with owner Jair Lynch, demanding time to pay back rent, a commitment not to be evicted, and a pledge that moving forward rent would be discounted.

Negotiations paid off with a settlement last week.

“We are incredibly grateful for the generosity of Jair Lynch,” says CASA’s Leon-Lierman. “They established a landmark precedent in their agreement with the tenants of Villas, by agreeing to no evictions or rent increases for a year, and $150,000 to help tenants in need of rent.”

Rivas credits her team for the success. “The tenants’ unity and strength made the agreement possible with the owner,” she says.

Rivas is thankful for work that allows her to help immigrant families without fear of reprisal.

“I feel in my soul that I couldn’t do this in El Salvador,” she says. “While I see discrimination and injustice here, it’s different from what I experienced in my country, because if you would stand up and speak out like I’m doing here, you’d get killed.” 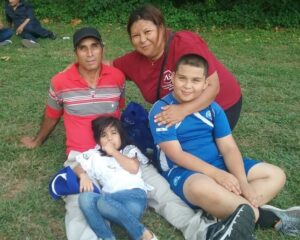 Lidia Rivas with her husband and children. Rivas family photo

Like the immigrants she works with, Rivas says she is fighting for a better future for her children, Erik, 13 and Kenzie, 8.

“I want my kids to be professionals, to help others, humble people, everyone,” she says. “And, I will not let them forget where their mother came from.”

Rosanne Skirble is a freelance writer in Silver Spring.

Click here to read the first story in our Langley Park series.

Click here to read the second story in our Langley Park series.

Opinion: Coalition Wants to Be Heard by MSDE Workgroup on English Language Learners

Grassroots group of parents, students and teachers say there is plenty of room for improvement on Kirwan recommendations.