When Gliny Gonzalez, a 51-year-old housekeeper at the University of Maryland College Park, woke up for work in mid-June, her chest was bothering her. The pain was probably from exercising over the weekend, she thought.

She attended a 3-hour safety training later that morning that included information on how to prevent COVID-19 exposure, but as a native Spanish speaker, she had trouble understanding the guidelines. She was assigned to deep clean empty dorm rooms with a surgical mask and a pair of gloves. Since the meeting that morning, however, she was having trouble breathing under her mask.

The next day, Gonzalez was admitted to the hospital with coronavirus.

“I am really scared,” Gonzalez said in an interview with Maryland Matters. She lives with her 18-year-old son and three friends in Lanham. “The psychological impacts of having gone through that still remains.”

Housekeepers and service workers at the University of Maryland have been working on a voluntary basis since the pandemic sent all students home in mid-March, said Todd Holden, the interim president of American Federation of State, County and Municipal Employees Local 1072, which represents several campus workers. But on June 15, all staff in residential facilities were asked to return back on campus to prepare for the fall.

Since then, workers have been concerned about the university’s inadequate safety protocols, Holden said.

Gonzalez called her supervisor on the morning of June 17 to say that she was in the hospital with symptoms of coronavirus. But campus officials did not immediately inform her co-workers about her positive test, nor did they instantly pursue contact tracing, according to Holden. 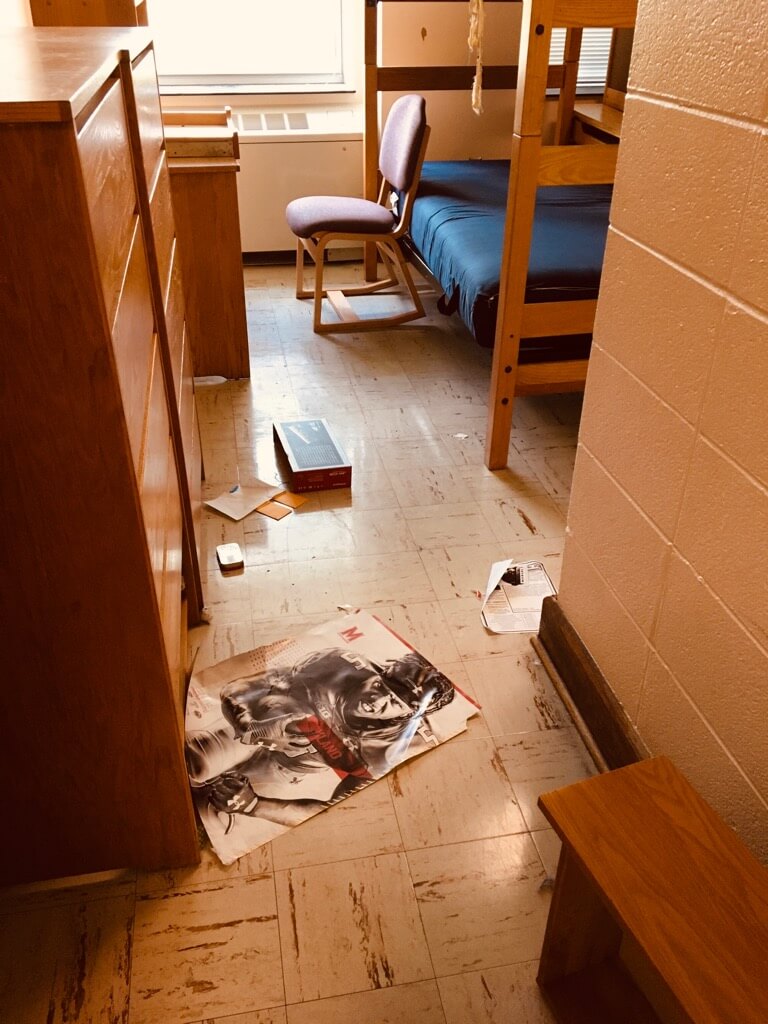 A University of Maryland dormitory room after students cleared out of campus. Photo courtesy of AFSCME Local 1072.

If an employee notifies their supervisor that they have tested positive for COVID-19, the department official should notify the University Health Center, according to Katie Lawson, a spokeswoman for UMD. The health center then must immediately begin contact tracing. After that, the department “may broadly notify others working in the area.”

Lawson did not say whether these steps were followed in Gonzalez’s case.

“They did none of it right,” said Saul Walker, a maintenance worker at UMD and chief steward for AFSCME Local 1072. “They are putting dollars-and-cents in front of human life.”

The University sent out an email to residential facilities staff about Gonzalez’s positive test for COVID-19 in the afternoon of June 20, three days after Gonzalez had notified her supervisor from her hospital bed.

Ana Soto, a 59-year-old housekeeper at College Park, had been in contact with Gonzalez and felt like the university should have contacted her earlier.

Since March, housekeepers and service workers have been asking the university to conduct in-person temperature screenings and to provide proper protection equipment for cleaning, such as N95 masks, gowns and disinfectant wipes.

In May, 106 housekeepers, including Gonzalez, signed a letter to the then-UMD president Wallace D. Loh for mandatory coronavirus testing for all employees who return to work. The University offers free voluntary testing for COVID-19, but the housekeepers felt like that is not enough to ensure safety of the community.

All employees approved to work on campus must view a short video about new safety responsibilities and read the University’s Community Responsibility Pledge which outlines health and safety practices, Lawson said. Both the training video and the pledge are available in English, Spanish and French Creole.

The university is also in the process of installing health information signage in English and Spanish across campus, Lawson said.

Gonzalez said she felt like this could have been avoided if there had been mandatory testing before all residential facilities employees had to return to campus on June 15. In-person screening with temperature checks, rather than an online self-assessment that employees must complete before coming into work, is also important, Holden said. “The big flaw about self-monitoring is that it introduces this whole dimension of subjectivity,” he said.

Soto sat next to Gonzalez during the 3-hour training Monday morning. Although they remained six feet apart, they rode the elevator together after the meeting, where they were standing close together.

When Soto heard that Gonzalez was in the hospital for coronavirus, she was worried. Soto lives with her husband, her daughter and step-son and four grandchildren.

She received the university’s email informing her of Gonzalez’s positive case that weekend, and mistakenly thought that the email meant that she had to self-quarantine since she had been in contact with Gonzalez. Soto is a native Spanish speaker and did not see the Spanish translation of the email below the English one.

The university reached out to Soto on June 25 and said that they did not think she had been contaminated by the virus, and so she would not get emergency paid sick leave for self-quarantine. She stayed at home for the next 11 days using her personal leave.

“I wanted everyone to get tested after Gonzalez’s positive coronavirus test to make sure no one is sick,” Soto said. “If they had tested me and it came back negative, I would have continued working.”

Workers are also worried about the influx of students who will arrive on campus this fall.

The University is planning to offer housing to 8,900 students this fall. Triples and quad rooms will be converted into doubles and floor lounges will be made to single or double rooms to allow for social distancing.

Without mandatory testing or in-person screening, housekeepers are anxious about the higher risk of exposure to coronavirus. Walker, who has been working at UMD for 20 years, remembers the adenovirus outbreak in 2018 that cost a student’s life. A few days before students came back on campus, Walker said he and other housekeepers were sent into the building to clean up the mold with no protective equipment.

Gonzalez stayed in the hospital for five nights and is currently recovering at home. “I have no more symptoms and my appetite has come back,” Gonzalez said. “The most difficult thing is that I am really scared.”

Climate Bill Dies as House and Senate Fail to Compromise

An effort to reconcile the competing versions of major environmental legislation collapsed in the final hours of the General Assembly session Monday night, rendering…

Md. House Panels Move Climate Bill as Pinsky Tries to Find Other Vehicles For His Priorities

A week after introducing a slew of amendments to a wide-ranging climate bill, two committees in the House of Delegates voted Thursday to advance…