The Juneteenth celebration at Grace Episcopal Church in Silver Spring marked the end of a difficult week.

On the day commemorating the end of slavery, parishioners and neighbors came to consecrate a Black Lives Matter sign at the edge of the church graveyard — where, in separate incidents just days apart, a 9-foot granite obelisk with the word CONFEDERATE chiseled in block letters on its base was defaced with black and red spray paint, and toppled.

A message left behind on poster board read:

Dedicated in 1896, the obelisk marked the grave of 17 Confederate soldiers who lost their lives in the Battle of Ft. Stevens (1864) in Washington, D.C., close to the Silver Spring church. With sympathizers on both sides of the conflict, Church records confirm, the soldiers were reinterned a decade later for “a Christian burial.”

At the late afternoon Juneteenth event, the parishioners and neighbors consecrating the Black Lives Matter sign at the edge of the graveyard shielded the felled marker.

“As a Black person, who goes to this church, it has been hard to walk by the obelisk,” she said as cars passed by honking in support.

Van Lowe said the vandalism of the grave site, coupled with the newfound national prominence of the Black Lives Matter movement, has intensified the urgency to take action as a community.

“We are aware of the symbols put in our church well before our time, and it is not what the church is today, [and to] replace them with images that reflect our diverse congregation today and our demands for racial justice going forward,” she said.

Associate Rector Amanda Akes-Cardwell says the congregation, which prides itself on its diversity of race, social and economic background and sexual orientation, has long wrestled with how to tell its story, without erasing the past.

The church is working with the Maryland Office of Cemetery Oversight and the Maryland State Attorney General’s Office, to determine what to do with the obelisk and base. 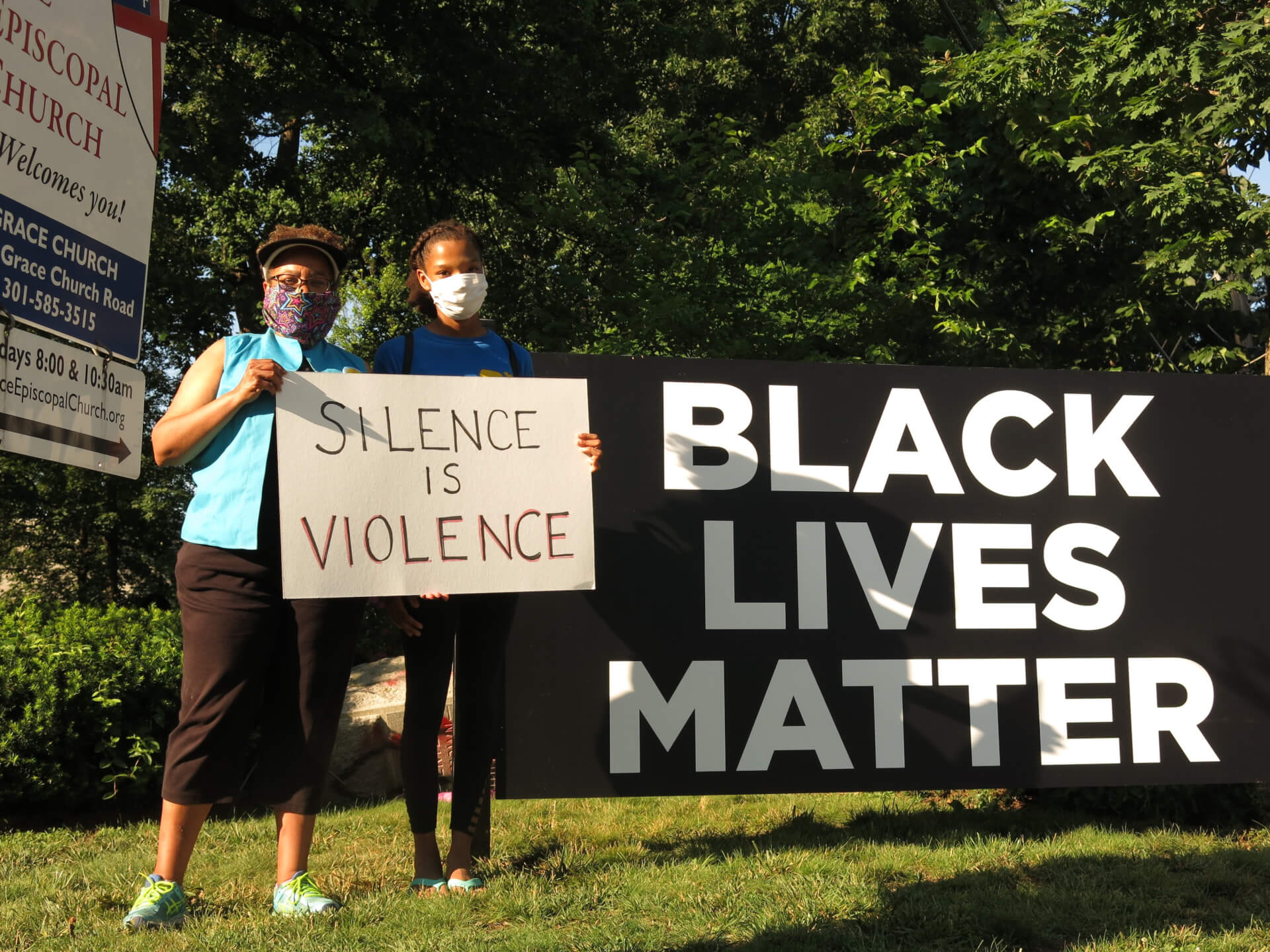 A mother and daughter join to make a statement at the Juneteenth celebration at Grace Church in Silver Spring. Photo by Rosanne Skirble

“The hope now is that it will be removed and those graves will be marked in a different way, one that is not so obviously sympathizing with the Confederacy,” Akes-Cardwell said. “We see this [moment] as an opportunity and our responsibility as Christians and people of God to work toward racial justice and racial equity in our community, in our Church and in our world.”

The incident also ignited a flurry of email on the neighborhood listserv, including a comment from retired art conservator, Marian Dirda. “The statue should be taken down and preserved, with its black spray paint intact to tell a new story. The graffiti is a powerful symbol of a changing time when people rose up against racism. Children in future years will ask what the paint means and be told the ugly, yet hopeful, story of our country’s struggle with oppression.”

What took place at the Silver Spring church is not an isolated incident.

On June 30, three Confederate memorials were defaced and a statue toppled in Frederick’s Mount Olivet Cemetery. A 107-year-old statue of a Confederate soldier was felled at White’s Ferry, the Potomac River crossing in Poolesville, two weeks earlier.

“During the Civil War Maryland was a border slave-holding state, one of four that did not secede from the Union at the onset of the War,” says Eileen McGuckian, president of the Coalition to Protect Maryland Burial Sites, a statewide organization that seeks to preserve graves threatened by vandalism, development or neglect.

The Maryland Historical Society puts the number of Maryland soldiers who died during the Civil War at 3,000, among the 60,000 who served with the Union and the 25,000 with the Confederacy.

McGuckian said the dead were usually buried in fields close to where they fell, on family farms, or as numbers increased in newly established National Cemeteries in Gettysburg (1863), and in Antietam (1867).

She said she is especially concerned that headstones with Confederate inscriptions and symbols like the Southern Cross of Honor, and those markers considered most vulnerable in today’s political climate are being photographed by coalition members.

“We have a tremendous respect for the past, everyone’s past, wherever, whenever, and whoever it is,” she said. “There’s no excuse for vandalism, desecration, destruction of any burial [site] on public or private land. The coalition reminds all citizens and public officials that desecration of burial sites is a criminal offense, punishable by Maryland law.”

Susan Soderberg’s master’s thesis on Civil War history from George Washington University turned into a journey across Maryland and the book “Lest We Forget: A Guide to Civil War Monuments” in Maryland, published in 1995.

The 65 monuments it describes, nearly evenly split between the Union and the Confederacy, are found in cemeteries, town squares and battlefields. The earliest (1866) marks the grave of Confederate Capt. John Gleeson in Baltimore’s New Cathedral Cemetery and the last in 1993, was erected by the Sons of the Confederacy in the South Mountain State Battlefield in Frederick County, for a Union and a Confederate general.

Soderberg says attacks on such monuments in graveyards with Confederate dead is an assault on the sanctity of the burial ground and on history. “It’s important that we don’t destroy history, as we try to correct it, and that it gets reconstructed in a different way. That’s just a different kind of propaganda. I hope we don’t go that far.”

Tracking symbols of the Confederacy

The Southern Poverty Law Center in late June released an update to Whose Heritage, an ongoing effort to identify and remove Confederate monuments, statues and plaques and other symbols from public spaces, including parks, trails and state houses — but not from cemeteries or on private land.

“They are not only painful reminders of the past, but of the present,” says Lecia Brooks, the center’s outreach director.

Brooks says the work has coalesced across the country since the 2015 mass shooting at Mother Emanuel AME Church in Charleston, S.C., followed by the Charlottesville, Va., Unite the Right rally in 2017, and most recently with the protests in the wake of the death of George Floyd.

Maryland got the message.

According to the Whose Heritage database, seven confederate symbols, including three monuments, have been removed since 2015 from Maryland public places in Baltimore, Ellicott City, Rockville and Annapolis, where a statue of U.S. Supreme Court justice Roger B. Taney was taken down from the State House grounds. Although not a confederate official, Taney was the author of the majority opinion of the 1857 Dred Scott decision, which declared that African Americans, enslaved or freed, could not be U.S. citizens.

What remains in Whose Heritage’s target list for Maryland is the state song, which praises the Confederacy; Jubal Early Court, a quiet street off Montrose Road in Potomac, named for Virginia lawyer and Confederate General Jubal Early; and a monument outside the Talbot Court House in Easton.

In a visit a few years ago to his 92-year old grandfather in western North Carolina, Henry Herr, from Catonsville, saw that his relative was deeply disturbed by racist rhetoric and confederate sympathizers all around him.

“I decided to do something about it,” says Herr, 30, who is white and works as a financial risk analyst in Baltimore.

His research led him to a gate post at Charlotte Hall, a Veteran’s Home in St. Mary’s County, where in 1993 the Sons of the Confederacy had put up a plaque to honor a confederate Rear Admiral, Raphael Semmes, who had attended the former military school on the site.

“The people who fought for the Confederacy do not deserve to have their values exemplified and glorified,” Herr testified that night. “A statue on the courthouse ground stands as a reminder and a confirmation that Talbot County glorifies the reasons why these men fought.”

With the exception of Talbot County Councilman Pete Lesher (D), the council members have all expressed opposition to its removal. Councilwoman Laura E. Price (R) decried the move to remove the statue, and said the council should not be influenced by “’an angry national movement.’”

That night the Council unveiled a sketch for a “unity statue,” to honor both sides of the Civil War.

A Facebook page has 1,182 followers who want to keep the monument to preserve local history.

A public hearing is scheduled for July 28 at Easton High School where the Council is expected to vote on its next move.

Herr will be there, petition in hand.

“This is clearly a flashpoint for a symbol of hate,” he says. “And, it shouldn’t be in the country as a monument. This is something that I feel that I can change and hopefully make Maryland a little bit of a better place.”

Rosanne Skirble is a freelance writer from Silver Spring.