Maryland Matters published a lengthy interview between reporter Bruce DePuyt and Congressman Anthony G. Brown (D-Md.), during the course of which Brown launched a full-throated attack on Gov. Larry Hogan [“Anthony Brown on Hogan: ‘He Hasn’t Led on a Single Thing He Campaigned On,'” June 23].

Of course, Mr. Brown lost the 2014 Gubernatorial Election to Gov. Hogan and obviously retains bitter feelings about his loss. But even so, the brickbats that he throws at the governor are misconceived and call out for a response.

Occasionally, the General Assembly has embraced sound policies proposed by the governor but in many of those cases, the governor’s bills have been tossed overboard so that similar or identical bills introduced by favored Democratic legislators could be passed in their place.

I am perhaps the most bipartisan legislator in Annapolis and eagerly collaborate with legislators on the other side of the aisle on a daily basis, so I am well aware how much can be achieved by sitting down shoulder to shoulder and working together to craft intelligent legislation. The governor has a talented legislative staff capable of working in a collegial fashion with legislators from both parties.

It is unfortunate that this sort of collaborative effort rarely occurs with respect to the governor’s bills. 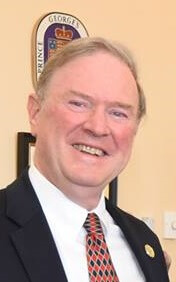 The most astoundingly inaccurate charge made by Congressman Brown was his claim that “[t]his pandemic demonstrated [Governor Hogan’s] ineffectiveness as a manager. … This is a guy who ran on competence in management and yet he’s demonstrated incompetence.”

Really? Contrary to Mr. Brown’s assertions, Gov. Hogan immediately took command of the COVID-19 crisis in Maryland and, in concert with health officers, has exercised responsible and highly effective leadership.

Thanks to the steady and prudent leadership – yes leadership – of Gov. Hogan, Maryland has weathered the covid-19 crisis with a minimal loss of life. In fact, he became a nationally recognized spokesman for the responsible handling of the pandemic and frequently appeared in the national media espousing safe practices.

For weeks now, the daily reports have reflected a steadily declining hospitalization rate. Several weeks ago, over 1,700 Maryland citizens were hospitalized due to the pandemic. Today, the number of people hospitalized has fallen below 500, and the number of people in the ICU has dropped below 200. Our positivity rate has fallen below 5%. Our offices, stores and restaurants have safely reopened, and Marylanders are responsibly observing safety protocols.

Unlike Mr. Brown’s checkered career as lieutenant governor of Maryland, which was defined by his stunningly incompetent handling of Maryland’s health insurance exchange, Gov. Hogan’s leadership of the state during the COVID-19 crisis has been nothing short of outstanding, and the polls reflect this fact.

The writer is a Republican representing Baltimore County’s District 42 in the Maryland Senate.