Del. Vaughn Stewart (D-Montgomery) has started an online petition drive to build support for his campaign to give $1,200 payments to claimants who have yet to qualify for unemployment compensation.

The funds would help tide people over until their claims are processed, he said in an interview.

Like many states, Maryland has struggled to process an historic flood of jobless claims from residents.

“I’ve spent the better part of the last week reading hundreds of stories from people all across the state who’ve been struggling,” Stewart said. “I have never had a more heart-wrenching experience. You wouldn’t believe the amount of misery and depression and suffering that’s out there.”

Stewart’s idea to give newly-jobless Marylanders $1,200 in instant cash is modeled after actions that Vermont Gov. Phil Scott, a Republican, ordered in April, when claims for jobless benefits spiked there. 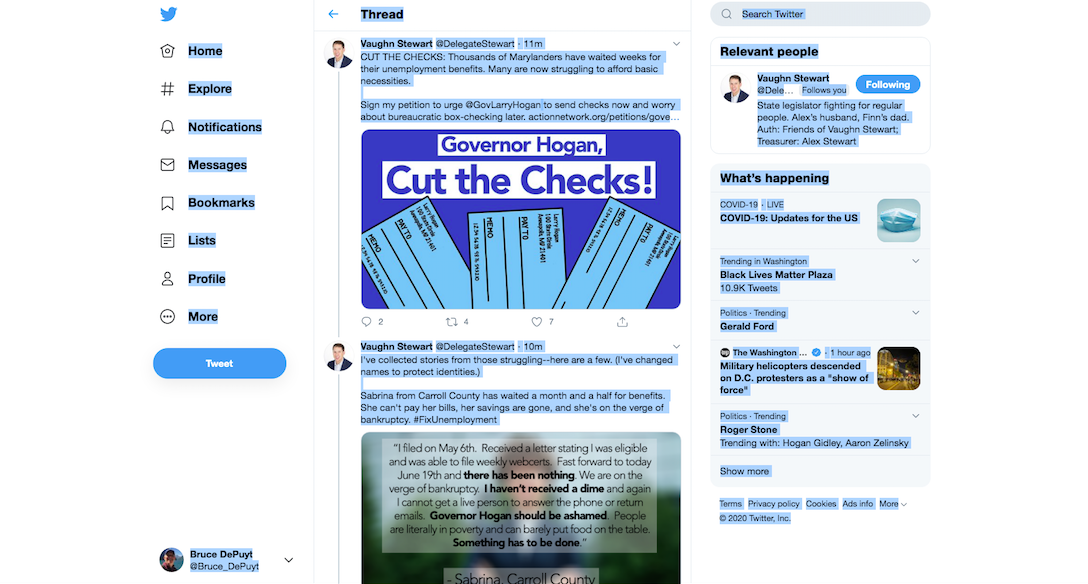 The Maryland Department of Labor has hired extra staff and installed a new computer system to help get benefits flowing. But workers whose benefits have been delayed or denied have flooded the agency and state lawmakers with desperate pleas for help — and they have bombarded Hogan’s Facebook page.

State officials have said their efforts to help everyone have been undercut by the unprecedented surge in claims, changes in federal law, and incomplete or contradictory filings by workers and their former employers.

The lawmaker praised the Hogan administration for reducing the state’s backlog of cases — and he acknowledged that the unemployment benefits system, which is managed by the states and the federal government, is complex.

But he said “box-checking” should not impede getting aid to those who need it.

“This is not a political witch hunt against [Hogan],” Stewart said. “But given the amount of suffering out there, it’s really incumbent upon him to give Gov. Scott a call and see if there is a way to replicate their efforts. The folks that I’ve talked to can’t wait another day. They’ve got debt collectors, repo men, and they’ve got folks hounding them. … It’s wearing them down.”