Following the death of George Floyd, the police chief for the town of Edmonston in Prince George’s County has implemented a new order to hold his police officers accountable when they see inappropriate force being used.

“We’re going to make sure that what we saw in that video in Minneapolis never comes to the town of Edmonston,” Police Chief Demetrious Harris said.

Harris has implemented a new general order issuing a duty to intervene for his officers.

“We’re going to move from awareness to action,” Harris said. 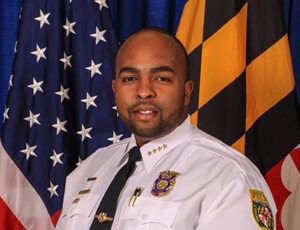 The officers are now required to, “either stop, or attempt to stop, another employee when force is being inappropriately applied or is no longer required,” according to the new order.

“Silence is just as bad” as violence, Harris said.

Harris is the first African-American police chief for Edmonston. He was appointed in late December 2019.

He said that any of his officers who do not follow the new order can be terminated.

“It is direct insubordination if you choose not to follow those guidelines,” he said.

When he recently talked to his officers, Harris said he emphasized what the other officers on the scene were doing when George Floyd was killed.

“One of the things that I highlighted the most was there were officers who stood there while Mr. Floyd said he could not breathe and they did not intervene,” Harris said.

In addition to the new policy, Harris said his police department is going to start a virtual town hall with local experts and guests to talk about how to improve the local community and policing efforts.

He said he is also excited to start a Citizens Advisory Council to the police department by the end of July.

Harris is also looking at recruitment efforts at the police department. He believes that police officers should be hired in the communities that they live in or have a connection to.

“Our officers have to represent us,” Harris said. “We have to find people who represent our community. I think we have more of an impact or more of a stake when we come from that community.”

Additionally, Harris said that he is going to try to increase the training hours required by his officers from 18 hours a year to more than 40.

And he wants to look at the emotional toll that policing has on an officer after a long career.

“Do we provide the proper psychological services for our officers to really survive a 20-year career when you’re seeing so much bad?” Harris said.