The Rev. Dr. Martin Luther King said it simply: “A riot is the language of the unheard.”

The eruptions across the country are built on centuries of racist violence compounded by three years of the Trump administration. The staggering fatalities and economic calamity from COVID-19 have disproportionately fallen on black and brown communities. Then we saw the life being choked out of George Floyd, breath by breath.

Grief, despair, outrage, fury. We’ve now watched as American law enforcement officers — who knew they were being filmed — kicked, clubbed, tased and rammed protesters, bashing heads, car windows and medical-support stations. None of the violence is tolerable but the ongoing violent behavior by those sworn to protect and serve us puts our national fabric in question.

President Obama described this moment as “the result of a long history of slavery and Jim Crow and redlining and institutionalized racism” and “the original sin of our society.”

The pandemic and the riots and looting have serially devastated communities already in extremis from underfunded schools and under-resourced communities, lack of health care, the criminalization of poverty, voter suppression, the erosion of our safety net and obscene economic inequality that largely tracks with race.

Despite our current president and his congressional enablers, I remain hopeful that, as the late Congressman Elijah Cummings said, “We are better than that.” This crisis is our chance to show we are. Will you wring your hands over the news, or will you direct your anger to constructive change?

Accountability will come from prosecuting those responsible for the deaths of George Floyd, Breonna Taylor, Ahmaud Arbery and the many others who died under similar conditions. Leaders across government will have to answer for their directives and behavior.

The second piece, action, is the greater challenge – one at which we have repeatedly failed. We need federal action to make sweeping changes to policing. We need federal legislation to standardize gaping disparities in how officers are recruited, trained and evaluated.

It beggars belief that there are 18,000 police departments in the U.S., each setting its own standards for who should be deputized to use lethal force in all our names. They also need training in de-escalation and identifying mental health issues, and they — and we — need a collaborative partnership allowing communities to have a role in oversight. 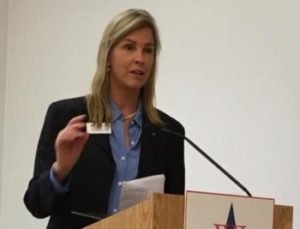 Beyond policing we need a suite of programs to untangle the racism from our core institutions, especially public and higher education, business and government. There are good examples of this work at all levels, around the U.S. and the world. This is a daunting agenda.

Here’s a less daunting action: As Congressman John Sarbanes wrote, “If our leaders don’t share that goal, then we get new leaders.”

The election looms. So we’ll all vote, yes, but we must do more: reach out to infrequent or unregistered voters through GOTV, phone bank, contribute to the campaigns of enlightened candidates.

There’s more. That work is “just” about the election. We have to demonstrate our values. Join a civil rights organization, participate in community conversations or start one — maybe at the next protest. Educate yourself on the lived experience of black and brown neighbors.

Use social media to show up, whether to testify for a school budget that reflects your priorities, to write to newspapers about toxic dumping in minority communities or to exhort elected officials to make health care accessible. Be a courageous participant in a multicultural society.

We are entitled to demand change, and to have it if we work for it. I suggest starting with some egregious issues: equity in school funding, criminal justice reform and real ballot access.

Case in point: Just a few months ago in Montgomery County, our efforts to put a polling station in majority-minority, heavily immigrant White Oak was outrageously and repeatedly denied, effectively disenfranchising entire communities in the area.

We did not create these problems but they are surely ours now. There are ways to address them productively. Please — join us, join together and bring someone with you. Find a way to work for justice in our schools, our communities and our prisons.

To reimagine and build a more just future will take all of us.

The writer is president of the Montgomery County Women’s Democratic Club.