Home COVID-19 in Maryland In Appeal to Board of Public Works, State Workers Ask, ‘Where Are...
Facebook
Twitter
Email
Print

As Mayland rolled into its 11th week of the pandemic-induced state of emergency, unionized state workers took to the streets Tuesday in an appeal for the government to provide necessary protections to keep them safe while they keep the state afloat.

Nearly 50 cars full of state union workers rode in a caravan from the AFSCME Council 3 headquarters in Baltimore’s Federal Hill neighborhood to five worksites, relentlessly honking their horns in an appeal to the Maryland Board of Public Works for adequate personal protective equipment, hazard pay — which they’ve dubbed “hero pay” — access to testing for all who work in round-the-clock care facilities and enough staff to safely do their jobs.

“One month ago, I saw the governor say that we were ramping up capacity to do up to 20,000 tests a day,” declared Miriam Doyle, a nurse at Clifton T. Perkins Hospital Center Nurse, through a bullhorn. “And as a state hospital union member, I gotta ask: Where are the tests?”

Drivers pumped their fists in the air while some passengers held signs through car moon roofs that read “No more guessing increase testing” and “#services matter.”

As the caravan rounded out the exhibition at State Center on West Preston Street in Baltimore, one police officer tried to reroute the long chain of cars so that city buses and other drivers could continue to move past the cacophony of honks.

“Today marks the highest number of positive cases ever recorded in Maryland, and today we’re calling on the Board of Public Works to fund the frontlines,” Doyle said.

The state’s Board of Public Works is set to meet Wednesday with potential budget cuts on the agenda.

Under state law, the governor — pending the approval of at least one of the other two members of the Board of Public Works — has the ability to reduce the state budget by up to 25%.

With the massive cuts in revenue the state is poised to see as a result of the public health crisis, that may mean that more staff shortages are on the table.

“We’re very concerned that he is going to take action on a number of agencies that are already staffed at historically low levels,” said AFSCME Council 3 President Patrick Moran “And, you know, where else is he gonna cut from?”

Moran asserted that the administration of Gov. Lawrence J. Hogan Jr. (R) has been unsuccessful in providing necessary supplies to the state’s frontline workers.

“He has failed in terms of providing the resources to the frontline employees to enable them to do their jobs in healthy and safe environments,” he said. “And he is now going to engage on a path of draconian cuts that are going to further compact this problem, and make it only worse.”

Moran explained that their appeal to the Board of Public Works — and Hogan in particular — is aimed to tell them that they have to “make good” on promises to “fund essential workers.”

He said that AFSCME is also calling on the Board of Public Works for oversight.

Lt. Gov. Boyd K. Rutherford (R) has chaired the Board of Public Works in Hogan’s stead since the pandemic began to infiltrate the state in early March.

This isn’t the union’s first appeal to the Hogan administration since the pandemic began.

To this point, AFSCME has seen its share of COVID-19 infections among its union members.

The Department of Public Safety and Correctional Services reported Monday that 220 correctional officers across its department have been infected. This represents 66% of the agency’s total infections among officers, inmates and department staff.

As of Tuesday, the Department of Juvenile Services reported 10 active cases among staff members — eight others who had contracted the virus have since recovered.

Monday, the Maryland Office of the Public Defender urged for the universal testing of youths housed in the Department of Juvenile Services’ facilities after it was reported that one of their private providers found 26 infections among kids and 15 among staff.

AFSCME is calling for Hogan to take action on testing. A number of signs painted on both paper and car windows asked where the 500,000 tests he secured from South Korea in April have gone.

Moran wonders the same, adding that mass-testing is the only way to get this virus under control in state-run facilities.

“As I’ve said before in this — and I’m gonna say till it’s a broken record: We need testing,” he said. “We need testing for all employees in all 2-4-7 facilities, and for everyone they oversee … if we want to see this thing come to an end, any time, any time soon.” 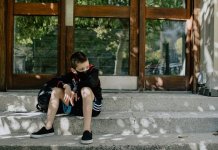 Opinion: As a Veteran and Pediatrician, I’m Asking That We All Fight for Children