“Tyranny” was the word around State Circle in Annapolis Friday afternoon as the group Reopen Maryland held another rally in protest of a series of executive orders put into place by Gov. Lawrence J. Hogan Jr. (R) after the COVID-19 pandemic infiltrated the state in March.

Despite Hogan’s decision to lift the stay at home order, which went into effect just hours after the rally was through, Marylanders from around the state gathered at the foot of the governor’s office, calling for reinstatement as life as they knew it before.

Attendees responded with a resounding “No!”

Hogan’s order allows for the reopening of many previously shuttered businesses and churches — both of which are still ordered to run at half capacity.

Some Marylanders say that’s not enough.

“Tomorrow morning, roughly six and a half million Marylanders are gonna think they can go out,” Reopen Maryland co-founder Tim Walters said. “And they’re going to be angry.”

The disgruntled crowd of nearly 200 waved Gadsden flags and held signs — some religious in nature, some right-leaning, but most just pleading for their constitutional rights.

There was chanting throughout the event on State Circle — “Coward!” “Tyrant!” and “Open us up!” were pretty popular. At one point, an attendee interrupted Walters to say he wanted to shine Hogan’s boots, which got a fair amount of laughter.

Walters made a point to say that the movement reaches beyond party lines.

“I want to be very clear … we are an apolitical organization,”  he said.

The group Reopen Maryland in company with Del. Daniel L. Cox (R-Frederick) and a series of pastors, veterans, politicians, campgrounds and other entities, filed a lawsuit against Hogan earlier this month alleging that his series of executive orders put into place since the pandemic fell across the state infringe upon their constitutional rights. 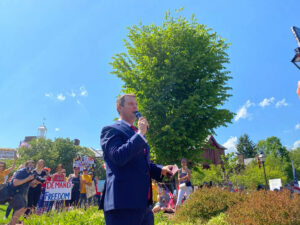 Cox told rally attendees that the suit appears to be moving their cause in the right direction.

The lawmaker said that three days after filing the lawsuit, in part, on behalf of campgrounds, Hogan reopened trails and golf courses across the state. He also said that a teleconference with the courts concluding that churches cannot be shuttered led to Hogan’s Wednesday decision to reopen religious centers.

Walters agreed, asserting that Ocean City Mayor Rick Meehan’s decision to reopen the town’s beaches last weekend and hotels this week was because of a caravan that Reopen Maryland held that traveled from Frederick to Salisbury earlier this month.

Since the governor’s decision to lift the stay at home order Wednesday, a number of decisionmakers from the state’s largest jurisdictions have said they aren’t ready to reopen because the virus is still at large and hitting their populations particularly hard.

Many are still mandating that their residents stay home.

It appears as though the relationship between the GOP lawmakers and the executive branch is tense, to say the least.

Cox told the crowd that he filed a Maryland Public Information Act request to the governor’s office for “all documents related to the COVID task force,” but said he was denied on the basis that the task force was deemed a “non-governmental unit.”

Maryland Matters reached out to the governor’s office to inquire about the task force’s role in the state government. Hogan spokesman Michael Ricci said the meeting minutes, documents and emails that Cox requested are not “units or instrumentalities of the state.”

“Of course, much of the input and feedback they’ve given is reflected in the various announcements the governor has made, and the Roadmap to Recovery plan he released last month,” he said.

As of Friday, the state was reporting 36,986 confirmed COVID-19 cases and almost 1,800 deaths connected to the virus.

Cox said that 67% of the 1,792 confirmed the state’s confirmed COVID-19 are from nursing homes. The actual representation is 55%.

Frederick County, which Cox represents, has seen 81 total deaths — 78% of which were nursing home residents.

He called on police officers — whom he called “the thin blue line” — to stand with the reopen movement in allowing people to pursue their daily lives as they did before Hogan’s executive orders.

“We have a God-given right to not only provide for our family, but to actually move about … to go to church,” he told the cheering crowd. “And you know, the good thing is, the thin blue line, many have reached out to me privately and have said that they will never cuff someone trying to feed their families” or worship God.

Cox ended his address by telling Marylanders bent on reopening to not give up.

“As Winston Churchill said in England’s darkest hour before the U.S. joined, never, never give up,” he implored. “Never give up because at the point of the darkness where its the most dark, the dawn is just coming — and let me tell you something: The dawn is coming for Maryland.”