Maryland’s revenue shortfall for the current fiscal year could be less than half of a dire projection made by fiscal analysts a month ago, based on recent tax data.

In April, Maryland’s Bureau of Revenue Estimates predicted that projected state tax revenues could drop by as much as $2.8 billion before June 30.

On Thursday, the bureau revised that figure substantially, to somewhere between $900 million and $1.1 billion.

“Obviously the worst-case scenario was just that, whereas these are likely scenarios,” Andrew Schaufele, director of Maryland’s Bureau of Revenue Estimates, said Thursday of the new current-year projections.

The new figures, while still a dramatic loss in state revenue over the course of just a few months, show that state income tax withholding is more resilient than expected. Even with almost 500,000 people in Maryland making new unemployment claims since mid-March, the state’s income tax withholding increased in April, Schaufele said.

“This defies every bit of logic,” he said. The number of Maryland jobs tied to the federal government and large businesses, as well as government interventions including deferred tax payments and stimulus grants to businesses, likely helped to blunt the impact, Schaufele added.

Nevertheless, a severe economic contraction is expected to continue in the state for the next few years, he said.

Schaufele shared two new economic scenarios with the board on Thursday, both of which were based on data from Moody’s Analytics and assume a COVID-19 vaccine exists by fall of 2021 with no second wave of the virus that causes an additional economic shutdown.

A more optimistic scenario assumes Congress will provide assistance to state and local governments and extend the Paycheck Protection Program, as well as other less severe economic assumptions.

Thursday’s virtual, nonvoting meeting of the board was unusual in its timing, but similar meetings are likely to continue as new projections and estimates become available before the board must issue official revenue estimates in September.

Thursday’s discussion by board members veered at times into their differing politics.

In lengthy comments, Comptroller Peter V.R. Franchot (D), chair of the panel, underscored his history of using the board to warn against spending increases and preach fiscal caution, including urging the governor to veto General Assembly bills that increased spending or taxes at the April meeting.

On Thursday, he said lawmakers of all stripes needed to come together to “win the recovery” by subjecting any new policy initiatives to a three-question test:

“Everything that we do moving forward must be viewed through those three fundamental questions,” Franchot said.

Maryland Budget Secretary David R. Brinkley said he thought the governor’s vetoes last week were a “strong first step” to addressing the revenue shortfalls. He pointed to one projection in the worst-case scenario presented Thursday that shows state revenues could dip in 2022 to levels last seen in 2016. 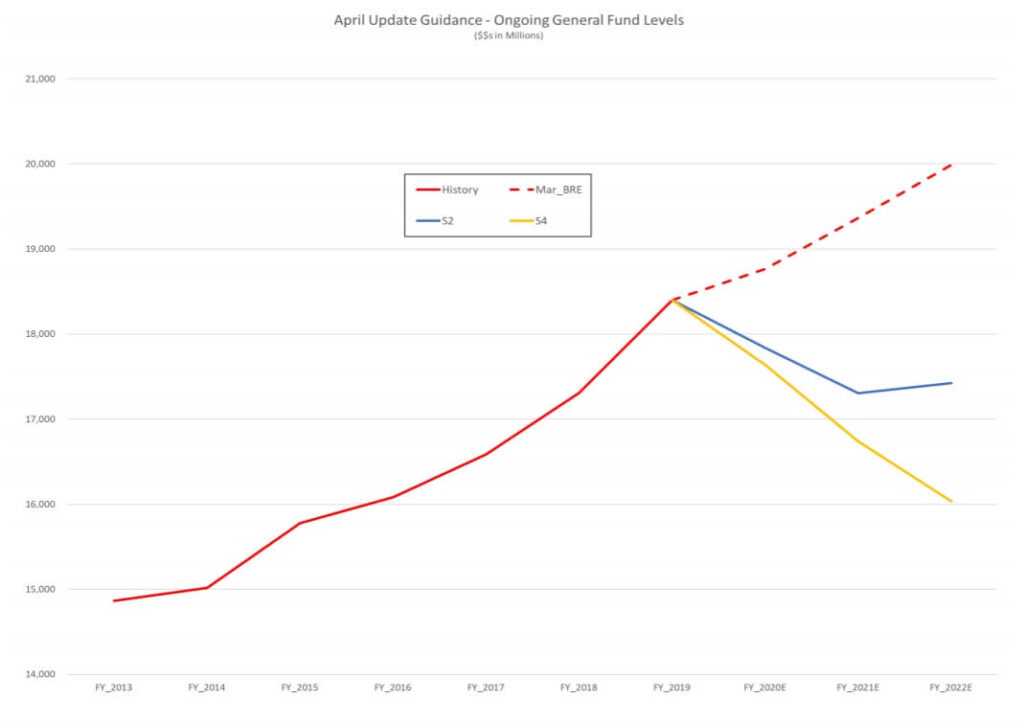 Graphic from the Board of Revenue Estimates

“This is not the time to open up some of those new programs and projects until we can adequately take care of what we already have on the books,” Brinkley said.

To keep the budget balanced in the next fiscal year, Brinkley said leaders will likely spend down a portion of the state’s $1.2 billion Rainy Day Fund, cut mandated spending from the General Assembly in future years, and reduce ongoing spending through the Board of Public Works ― whose members are Hogan, Franchot and Treasurer Nancy K. Kopp (D).

“The state’s ability to weather this storm is entirely dependent on our willingness to make difficult decisions and sacrifice where we can,” Brinkley said. “Remember, no one, no project, no program, no mandate and no formula can or will be exempt from these actions.”

Brinkley did not share details on Thursday of any particular cuts that are likely to be recommended to the Board of Public Works or in the state’s next annual budget.

Kopp said she was concerned about the focus on cost-cutting and wanted the state’s elected leaders to come together on a wider vision for pulling through the economic downturn.

“I’m very concerned that before we try to solve our immediate problem by cutting jobs and adding to unemployment, or by cutting necessary services to citizens of the state of Maryland, we look at all the alternatives,” Kopp said.

She and Franchot both said they hope to weather the economic crisis without resorting to layoffs of state government employees.

Kopp suggested that the state should also be focused now on strengthening job training programs and other investments in the future, including to revive a multi-billion-dollar school construction plan that could provide out-of-work Marylanders with jobs.

“It’s not simply a question of just cutting,” she said.

During the meeting, Senate President Bill Ferguson (D-Baltimore City) tweeted that the earlier dire estimates were an example of fear-mongering by the comptroller that led to the veto of increased funding for historically black colleges and universities in the state, education reform and school construction “at a time when we need to be creating jobs.”

Ferguson acknowledged that those programs would have required budget adjustments in light of the pandemic.

“That’s why I offered the Governor the opportunity to jointly tackle this financial reality instead of vetoing these post-COVID visions for our futures,” Ferguson tweeted. “But when Comptroller held a hasty press conference before revenue data had been fully vetted and miscalculated projections by over $1b, the Governor relied on that information. All of us in elected office owe a higher duty of care in these challenging times to put down the political side shows and solve problems.”

Asked by a reporter during the meeting if he cared to respond, Franchot declined.

“Mr. Schaufele, you don’t have to answer to that,” Franchot shot back. “And I don’t think we have to respond, either.”