Top Maryland officials turned up at the Charlotte Hall Veterans Home in St. Mary’s County Monday to distribute toiletries and other sundries to the assisted living facility’s hundreds of residents.

A bipartisan group of lawmakers and Maryland Secretary of Veterans Affairs George W. Owings III were on hand. The event was sponsored by the Legislative Black Caucus of Maryland and the Maryland General Assembly Veterans Caucus. Del. Michael J. Rogers (D-Anne Arundel), a member of both caucuses and a retired Army colonel, spearheaded the initiative. 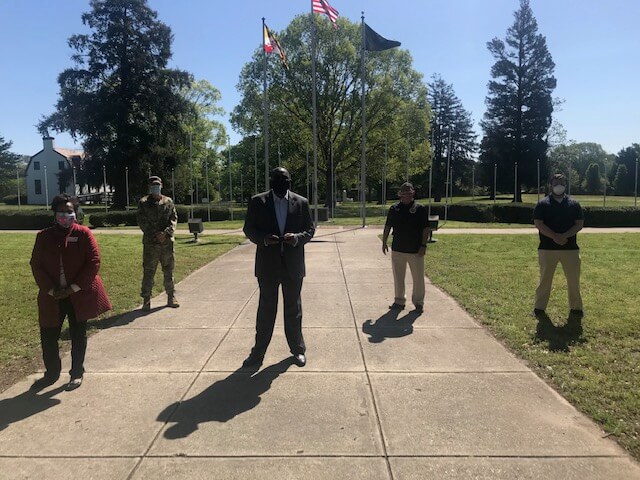 Del. Darryl Barnes (D-Prince George’s), the chairman of the Legislative Black Caucus, speaks outside the Charlotte Hall Veterans Home after he and colleagues delivered toiletries to the residents of the state-owned facility. Photo courtesy of Del. Michael J. Rogers

With family members unable to visit veterans living at Charlotte Hall because of the COVID-19 pandemic, lawmakers spent 10 days collecting items to distribute at the facility, based on the needs identified by Charlotte Hall officials.

Rogers said he and his colleagues felt called to find new ways to honor traditions while staying safe and protecting some of America’s most vulnerable populations.

“What a wonderful way to kick start Military Appreciation Month in Maryland,” he said.