The COVID-19 pandemic has left over 800,000 Maryland children to learn from a distance but, when it comes to distance learning, it has also left many in the dark.

Teachers have been attempting to deliver their curriculum virtually since March 16, but are finding that many of their students don’t have adequate access to computers, internet or a combination of the two.

Last week, Maryland State Superintendent of Schools Karen B. Salmon extended the month-long school closure to May 15, with the future of the remaining school year hanging in the balance and a number of kids languishing with limited access to education services.

“State and local school officials are preparing for a number of scenarios depending on when our educators and students would be able to re-enter school buildings,” Salmon said at a news conference outside the State House Friday.

U.S. Sen. Chris Van Hollen (D-Md.) held a virtual discussion with stakeholders across the state Tuesday to address what has been done to reach kids who seem unreachable, and how the state should move forward even when the crisis is through.

Van Hollen’s roundtable addressed the “homework gap,” or the inequity faced by kids who don’t have adequate access to technology in their homes to complete assignments. The senator said that the mandatory distance learning that has resulted from the COVID-19 pandemic has shown “an even greater and stark light” on these inequities in school systems throughout Maryland and the nation. 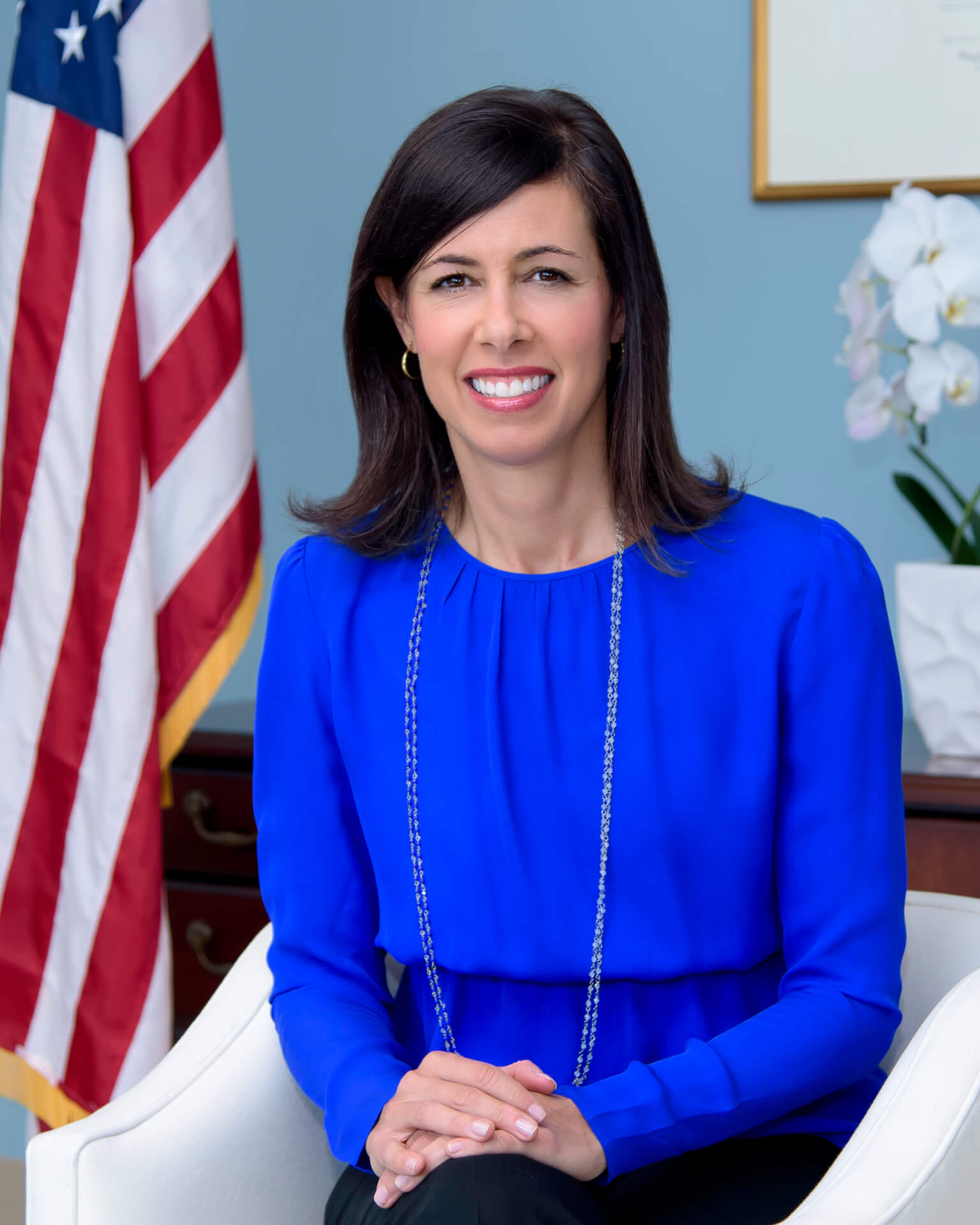 “Where those numbers overlap is what I call the homework gap,” she said. “And according to the Senate Joint Economic Committee, there are 12 million students in this country who fall into the homework gap. You see them. They’re the ones hanging out at McDonald’s and typing a paper while nursing a soda; they’re the ones who are sitting in the library parking lot after hours because that’s where they get a free Wi-Fi signal.”

Rosenworcel is one of five FCC commissioners who oversee the so-called E-rates program, which is an initiative to ensure that public libraries and schools across the country have adequate access to affordable broadband internet.

She said it’s time to develop federal policies that address these preexisting inequities in an effort to “leave no child offline.”

Policies have been in the works, though recent efforts have been unsuccessful, officials conceded.

Van Hollen proposed a provision for the third round of federal CARES Act funding passed late last month that would have established a “homework gap trust fund.” The pot of money would have afforded $2 billion to the Federal Communications Commission to create broadband internet access across the state. This effort was thwarted.

Instead, the CARES Act has provided Maryland with nearly $250 million through a combination of programs to address problems with distance learning that have been brought to the forefront by purchasing computers and paying for wireless hot spots for communities that need assistance.

At the Friday news conference, Salmon said that 90% of the $207 million given directly to Maryland public schools through the legislation’s funding will go to school districts to address problems that have arisen in the face of distance learning.

This money is already making its way into the hands of some students.

The district’s board of education has also allocated $2 million to partner with Comcast so that students who qualify for free and reduced-price meals have free access to the internet.

According to data provided by the Maryland State Department of Education, nearly 60% of students in Prince George’s County qualified for free and reduced-price meals during the 2018-2019 school year.

She said that prior to the beginning of the pandemic, only one in four students in Baltimore City had access to technology outside of the classroom and that ratio didn’t budge once school was suspended last month.

Santelises said that her district has purchased 12,200 Chromebooks and 15,000 power cords in addition to the 27,000 portable computers that they had on-hand, distributing them first to high school juniors and seniors before handing them out to younger students.

Computers have been distributed to about 75% of students, so far. Baltimore City Public Schools is also partnering with Comcast to provide internet to some of its needy families.

Sometimes student access to broadband internet is foiled by geographical and infrastructure barriers. To address this, some teachers have gone above and beyond their regular regular responsibilities.

Cheryl Bost, Maryland State Board of Education president, chronicled a teacher in Dorchester County who has been teaching lessons from the front seat of her car while some of her students learn from the backseat.

Nil Grove, Chief Technology Officer for Allegany County Schools, described towns on both the east and west ends of her county that have minimal cellular coverage and no internet access whatsoever.

“Our topography in Allegany County prohibits that line of sight service that you need when you have cellular or internet-type service provided from a tower,” she said. “So, unfortunately, these small towns also have a very large challenge of getting any kind of connectivity.”

She said that Allegany County Schools have been partnering with AT&T and FirstNet to provide around 60 hot spots to these regions without proper infrastructure. The school district has also purchased 3,500 Chromebook computers.

Kelly L. Griffith, superintendent of Talbot County Public Schools, said given that her county has 600 miles of shoreline and a school on an island, internet connectivity is the main challenge.

For now, the district has installed hot spots at schools, and are working with Easton Utilities to set up hot spots in other areas.

But Tonya Sweat, vice president for advocacy at the Maryland Parent Teacher Association, argued that hot spots aren’t a long-term answer to the digital divide.

“Hot spots are not the perfect answer, so we really need to focus on improving our infrastructure here in Maryland so that every home has broadband high-speed access,” she said. “That would be the perfect world if you were to ask Maryland PTA for resolution.”

Van Hollen agreed that Maryland needs to “dramatically increase” the installation of high-speed broadband internet across the state, adding that Congress recently approved legislation that would allow states to map out what areas are most in need of infrastructure adjustments to improve internet access.

“We need to have done this yesterday,” Van Hollen stated.

Rosenworcel likened the problem to the widespread lack of access to electricity in rural communities decades ago.

“In the ’30s we had an electricity divide, but we created the Rural Electrification Act and solved it in rural America,” Rosenworcel said. “We’ve got a digitization problem now, where do we solve this problem? It starts with mapping in our rural communities.”

In this time of uncertainty, teachers aren’t just worried about their students’ ability to access their curriculum. Many are concerned about being unable to check on their well-being.

Bost said some of her teachers are having trouble reaching their students at all, and that they are scared for what they may be going through. She said teachers have expressed concern about trauma that students across the state are experiencing, from food insecurity to neglect at home.

“When we see that child abuse and neglect claims are down, that’s not a positive in our mind because it’s when our educators are interacting with students when we can see that there might be something wrong,” Bost said.

She said schools statewide are already experiencing a shortage of psychologists, counselors and social workers, and that teachers are wondering about the burden students will have bared alone should schools return in the fall.

Van Hollen acknowledged that the counselor shortage existed prior to the pandemic, and noted that that is something that must be prioritized in future federal education budgeting.

Griffith said that at the beginning of the school closures, her district made every effort to get in touch with each student, going so far as to contact local law enforcement agencies to perform wellness checks.

“There are a lot of people that are experiencing a lot of things for the first time, in a very difficult time,” she said. “And so we need to make sure we’re reaching out to them and not waiting for them to reach out to us.”