In the space of three months, state revenues are estimated to contract by about $2.8 billion, according to new estimates released Friday by Comptroller Peter V.R. Franchot (D) and the Bureau of Revenue Estimates.

Both income tax revenues and sales tax revenues are expected to fall by almost $1 billion before June 30, according to the new predictions. Other smaller pots of revenue, like lottery sales and court fees, have also contracted.

The losses since March and estimated through the end of June amount to about 15% of the state’s overall annual revenues.

The state has never before seen such a steep decline in revenues so close to the end of a fiscal year, officials said.

“The stay-at-home order as well as social distancing are absolutely creating the steepest economic nosedive in modern history,” Andrew Schaufele, director of Maryland’s Bureau of Revenue Estimates, said during a virtual news conference on Friday. “But in their absence, the final economic impacts would be far greater and playing out over a much longer period of time.” 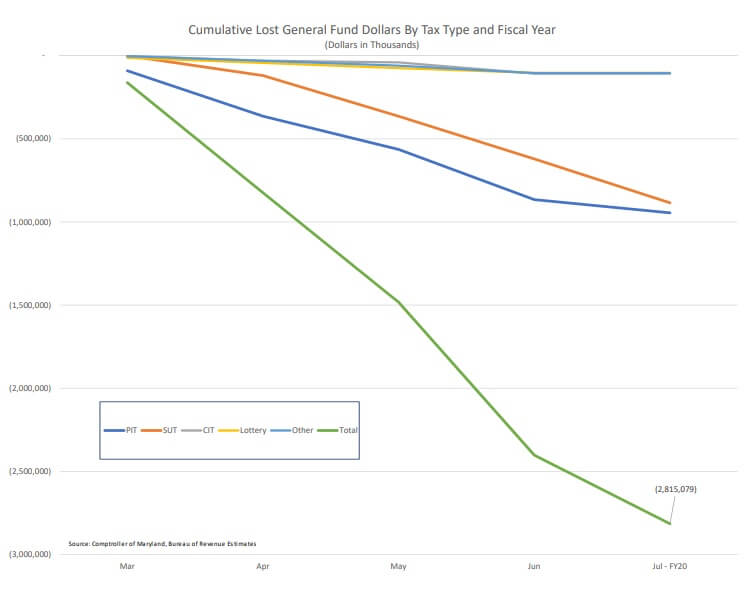 Hogan said the state will continue to meet payroll expenses and allow necessary increased spending to respond to the novel coronavirus. But his Department of Budget and Management will soon make recommendations for budget cuts, which will be required in all state agencies, Hogan said.

The state will also be tapping into and “spending much of, perhaps all of” the $1.2-billion-plus Rainy Day Fund to cope with revenue losses, Hogan said.

The state’s three-member Board of Public Works ― which includes Hogan, Franchot and Treasurer Nancy K. Kopp (D) ― is empowered to cut the state’s budget in real-time.

Franchot said the process of trimming the state’s budget by more than $1 billion during the Great Recession was likely easier than the fiscal stress the board will soon be forced to reckon with during the pandemic.

“That period, as awful as it was ― and it was just horrendously painful ― is going to be like a picnic compared to what we’re going to go through with this coronavirus impact on our state budget,” Franchot said.

Hogan noted that the fiscal estimates released Friday were a “worst-case” scenario that he hoped would not come to fruition.

“Hopefully we will not have to make the kind of cuts [the comptroller] was envisioning,” Hogan said later in the afternoon.

With much of the private sector shut down in Maryland to stop the spread of COVID-19, the state is grappling with never-before-seen figures when it comes to losses in tax revenue and employment.

By contrast, it took about 10 months during the Great Recession for the state to see 240,000 job losses.

Even with the sobering numbers, there are some things that may blunt the impact to Maryland’s economy.

While state income tax withholdings are expected to drop by 22%, Schaufele said it was a testament to the strength of the state’s workforce and close ties to the government that the number is not larger.

Maryland will see some financial relief from a federal stimulus package, about $4.9 billion, but that funding is generally intended to enhance safety net programs and cover new expenses, not backfill lost revenues.

The lost revenues and economic downturn will almost certainly have an impact on Democrats’ top priority this year ― a decade-long multi-billion-dollar effort to reform the state’s education system.

That bill, along with more than 650 others passed during the 2020 General Assembly session, were formally sent to Hogan’s office for consideration earlier this week. While his office has not yet reviewed the bills, Hogan said Friday “that it is very unlikely that any bills that require increased spending will be signed into law.”

In response, state Senate President Bill Ferguson (D-Baltimore City) agreed with Hogan that “we will be forced to make hard choices about priorities and values. COVID-19 has changed the world and it has changed Maryland.”

But without specifically referring to the Blueprint for Maryland’s Future, the ambitious education spending and reform plan that the legislature passed last month, Ferguson suggested that it would be wrong for state leaders not to look ahead and bolster the state’s education system.

“This crisis will end, and the cost of containing this crisis cannot be the foreclosure on hope for a better future,” Ferguson said. “Now, more than ever, our decisions about who we are and what we believe about every individual’s God-given potential must continue to be our guide.”

The estimated revenue losses released Friday assume that a stay-at-home order remains in place at least through June 30.

In recent interviews, Hogan and the state’s public health professionals have expressed reluctance to begin lifting social-distancing measures too early, fearing that could cause a new spike in the number of COVID-19 diagnoses in the state.

As of Friday morning, there were 6,968 confirmed coronavirus cases in the state, and 171 Marylanders have died since mid-March.

All officials have said advice from public health experts will dictate the end of measures intended to stop the spread of the virus.

“To be clear, the timeline and pace for when we return to normalcy should and must be dictated by our public health experts, and must be influenced by the health dangers this virus may continue to pose to our citizens,” Franchot said.

Editor’s Note: This story was updated to correct the total balance of Maryland’s Rainy Day Fund.