Despite quiet hallways and empty streets prompted by the COVID-19 viral outbreak, business in the General Assembly was still abuzz during lengthy Saturday floor sessions.

Unprecedented measures taken to ensure public safety in the darker days on the horizon have lead to a lack of access to the legislative complex for the public, lobbyists and most staffers. On Saturday a dozen lobbyists clustered outside the State House for a chance to catch lawmakers as they went in for their early afternoon sessions.

The closures have prompted other novel actions to ensure constituent participation in the legislative process.

The Senate Judicial Proceedings Committee made the decision Saturday to live stream its voting session — a step not usually taken. Ordinarily, committee hearings and House and Senate floor sessions are available online, but voting sessions are not.

In the absence of their constituents, members of the General Assembly have called for a more transparent and expedited process.

Before the meat of the floor session began Saturday, Senate Minority Leader J.B. Jennings (R-Harford and Baltimore County) asked Senate President Bill Ferguson (D-Baltimore City) about a laundry list of measures to be taken “in case — God forbid — we have to leave here early,” including passing the operating and capital budgets and confirming nominees for state positions who have yet to be considered by the Executive Nominations Committee.

On Friday afternoon, Gov. Lawrence J. Hogan Jr (R) issued a statement calling on leadership in the General Assembly to complete a number of tasks “no later than Tuesday,” including some of those brought up by the minority leader.

In an unprecedented move Friday, Ferguson moved upon one of Hogan’s requests, recessing a floor session to confirm his nominee for the superintendent of Maryland State Police.

Jennings said that the General Assembly is lacking transparency because of its current limited ability to engage the public, citing the Open Meetings Act, which permits public admittance to meetings held by governmental bodies in Maryland.

Ferguson responded by saying that the decision to proceed without public presence was a difficult one for him, but was made after conferring with public health experts.

“The idea of not having the public in the legislative process was something that was very, very, very challenging for me to come on board with,” Ferguson said.

Sen. Robert G. Cassilly (R-Harford) acknowledged that precaution was being taken in light of the pandemic, but argued that the General Assembly “can overcome that.”

“It seems to me that … to suggest that we are forced into this because of the virus just doesn’t do it justice because the technology is so there, so readily available, so cheap, so plentiful,” he said on the Senate floor. “I’m just not buying why this illness is an excuse for pretty much shutting down the critical debates from the public in this body.”

Ferguson said Cassilly’s point was “well taken,” but that legislative leaders are taking what they believe are the most logical steps.

A reporter from The Daily Record video-streamed the Senate floor session on Facebook Saturday.

There was no public discussion about COVID-19 and the legislative calendar on the House floor Saturday. The General Assembly is scheduled to adjourn on April 6.

Both the House and Senate plowed through dozens of bills in sessions that each lasted roughly four hours on Saturday.

Most significantly, the Senate adopted two amendments on the proposed recommendations of the long-running Kirwan Commission to reform public education in Maryland — one of which could potentially put the brakes on the plan if the state economy goes south due to the pandemic.

Six amendments were proposed to the Kirwan bill, known as the Blueprint for Maryland’s Future; only two were adopted.

Most notable was an amendment offered by Senate Majority Leader Nancy J. King (D-Montgomery), who proposed to limit the amount of extra spending on the blueprint during years with a major financial downturn — much like the one that could be looming in the wake of the COVID-19 outbreak.

Specifically, the amendment would limit the per-pupil spending increases envisioned by the Kirwan legislation to the rate of inflation if the state’s revenue estimates in December fall 7.5% or more below the projections made earlier this month.

“We’d be crazy not to,” King said in an interview.

House leaders, who were reading about King’s amendment in real time on Twitter, appeared irritated by the development across the hallway. A similar proposal offered by House Republicans has previously been rejected. 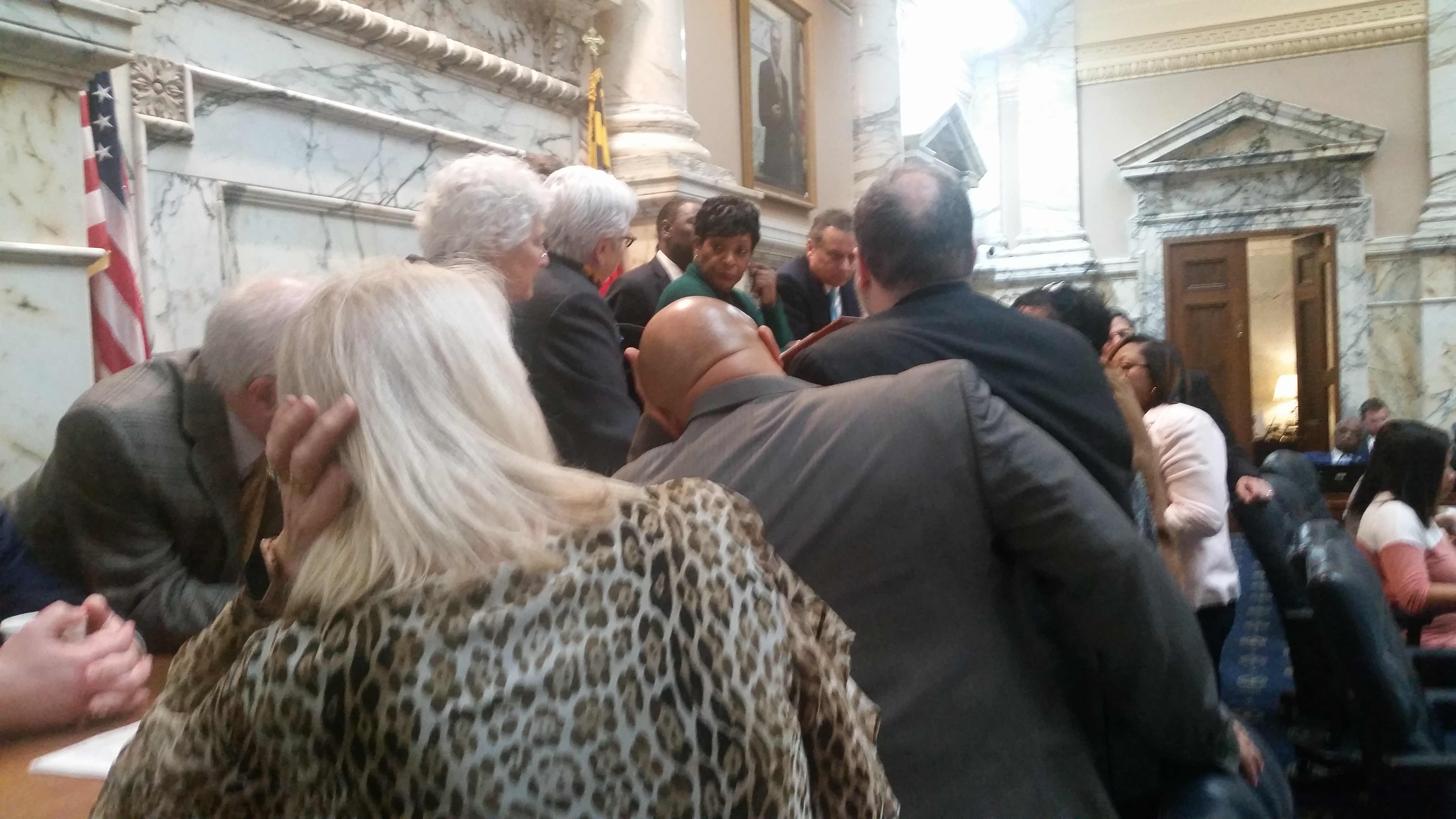 Speaker Adrienne A. Jones (center) and House leaders confer about the legislative calendar on Saturday afternoon. Photo by Josh Kurtz

“There’s really not much to say [about King’s amendment] at this point, because we’re still taking a look at it,” House Ways and Means Committee Chairwoman Anne R. Kaiser (D-Montgomery) told reporters.

Sen. Andrew A. Serafini (R-Washington) supported King’s measure, calling it sensible in a time of risk.

“This is for us to say in a time of great uncertainty, we should be prudent, and I believe that’s what this does,” he said.

Not everyone was in favor of continuing to debate the groundbreaking education legislation. Even with King’s proposed measure, Jennings expressed concern.

“I mean, this bill — I gotta say, a week ago I was seriously considering it … What’s got me heartburn now is, as you mentioned the coronavirus, where we stand and what our economic future looks like because I truly believe it’s gonna be devastated this year,” he said.

Both the Senate and House on Saturday debated emergency legislation which would allow the state government to take certain measures during the COVID-19 outbreak, including increasing instances of testing, upping telehealth usage, lowering the price of the virus’ immunization — should it be effectively discovered — and providing job security for Marylanders who must undergo quarantine.

Two amendments were made to the legislation during the floor sessions, allowing for alternative schedules for medical staff so that every shift in a medical facility is covered, and increasing unemployment benefits for workers who may find themselves without a job during this trying economic time.

Addressing the amendment changing hours for medical workers, Sen. Malcolm L. Augustine (D-Prince George’s),  said that approving such measures “emphasize[s] the importance of us being here.”

“It’s just really important for us to be here because we as the legislative body have a role in being able to deal with the situation that is happening outside of these walls. And this has changed from one day to the next,” he said. “I think it also just demonstrates how it’s important for us to stay here, as well, and be deliberate in the work that we do as … this situation in this crisis is changing.”

The Senate is scheduled to go in at 2 p.m. Sunday, while the House will gavel in at 3 p.m. Many committees are scheduled to meet earlier in the day.