Maryland’s Department of Transportation came out Thursday against several bills that could affect its plan to tap private funding to widen two Washington, D.C.-area highways and the American Legion Bridge.

MDOT said the proposals would hinder its ability to bring congestion relief to the bridge, the Capital Beltway and Interstate 270, site of long backups that routinely rank among the worst in the nation.

One of the measures being considered by the House Environment and Transportation Committee would require top state officials, including the governor, to set a cap on the tolls motorists would face on Express Toll Lanes built using the state’s existing public-private partnership law.

A second measure would hold MDOT to public promises it has made. A third would require additional financial oversight of future public-private partnership (P3) projects.

The three bills — believed to have a good shot at advancing — were among more than a dozen on which the panel heard testimony on Thursday.

MDOT did not send anyone to testify for or against the bills, but a panel of transportation advocates spoke to oppose them. Skeptical lawmakers frequently questioned the opponents’ assertions and much of the opponents’ testimony appeared to buttress the Hogan plan in general without directly addressing the thrust of the bills.

Committee Chairman Kumar P. Barve (D-Montgomery) insisted that his proposal to require the Board of Public Works to sign-off on toll rates is not intended to kill Gov. Lawrence J. Hogan Jr.’s road-widening plan.

House Bill 1220, he said, would protect the public from sky-high tolls by having the BPW — made up of the governor, comptroller and treasurer — publicly set maximum per-mile toll rates before the project moves forward.

“This proposal for I-270 and the Beltway is completely new,” Barve said. “I think it’s important for us to know that elected officeholders — people who are responsible to the people of Maryland — had to cast a vote to enable that sort of thing to take place.” 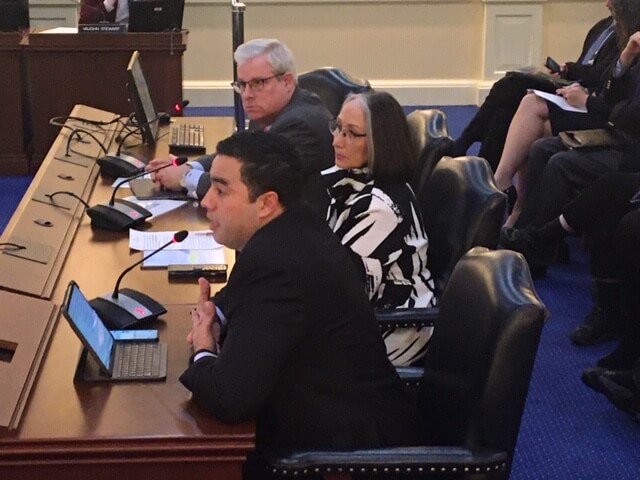 Testifying before the House Environment and Transportation Committee on Thursday were Michael Sakata of the Maryland Transportation Builders & Materials Association (closest to camera), Ellen Coren of the Greater Bethesda Chamber of Commerce (center), and John Kane of Citizens for Traffic Relief. Photo by Bruce DePuyt

John Kane, of Citizens for Traffic Relief, said “putting in arbitrary numbers” would “disincentivize the investment community [and] would cost the commuters more in the long term.” He did not elaborate.

Ellen Coren, an official with the Greater Bethesda Chamber of Commerce, claimed, without evidence, that shifting toll-setting from the MdTA to the BPW would “undermine the basic underpinnings of the P3 process.”

“Artificially limiting toll rates is counter-intuitive to the premise behind managed lanes,” she said. “Best practices encourage a range of toll rates that are dependent upon the levels of congestion.” Toll rates would vary with conditions under any scenario the state approves.

Several lawmakers expressed concern about toll spikes that motorists in Virginia face during periods of peak demand. “Why should you have to pay an exorbitant amount for the profit of one party?” said Del. Anne Healey (D-Prince George’s).

Kane dismissed reports of $45 tolls as “a buzzword” and said that commuters who don’t wish to pay to use express toll lanes can ride free in regular lanes.

Kane also said that “carpoolers can ride free on the tolled lanes, at all times,” a speculative claim at best, since the state is more than a year from finalizing a contract.

Holding MDOT to its “promises”

House Bill 1249 seeks to enshrine in statute a laundry list of pledges that MDOT Secretary Greg Slater made during his January testimony to the Environment and Transportation committee and elsewhere.

MDOT is officially neutral on the bill, but the agency’s letter to the committee labeled the measure unprecedented.

“Taking this action would establish a concerning precedent for interfering in future procurements which would introduce a measure of uncertainty in the private sector in conducting business with the State of Maryland,” the agency wrote, referring to the bill.

“Ultimately, this would have a deleterious affect the ability of state government to procure goods and services at the greatest value to the taxpayer.”

Kane told the panel that changes are a fact of life. “You have these aspirational goals when you start these large projects that, often-times, adjustments have to be made.” He noted the controversy about a tunnel that Montgomery County recently promised along a trail.

Coren called it “irresponsible” for the General Assembly to attempt to hold the agency to its public promises. Doing so, she said, represented a potential “curtailing and crippling of a much-needed P3 project” by “establishing a myriad of requirements that must be satisfied.”

The bill’s sponsor, Del. Marc Korman (D-Montgomery), told the committee that the state’s broken promise to build a bike and pedestrian lane on the new Nice-Middleton bridge buttressed his push to enshine P3 promises into law.

“There is no precedent for an $11 billion to $15 billion mega-toll-lane expansion project that covers 70 miles through three different jurisdictions in this state,” he said. “I think this is appropriate for a project of this size and impact to make sure they do the things they said they were going to do.”

In a letter to Barve’s committee, the agency claimed the bill would “delay and threaten to halt” Hogan’s road-widening plan and represented “a significant departure from the State’s carefully considered public-private partnership law.”

The measure “could serve to irreparably damage the P3 market in the State of Maryland,” MDOT wrote. In addition, giving the legislature up to a year to remove a P3 designation, one of the bill’s planks, would “undercut efficient synergies to solicit innovative solutions to very complex problems.”

Backers of the measure have said it adds a needed additional layer of oversight to complicated transactions whose ramifications will be felt for decades — and that taxpayers must be protected from the collapse of a vendor, an issue other states have been forced to deal with.

But MDOT’s letter warned “it would be devastating to the entire region” if the state cannot move forward on Hogan’s agreement with Virginia Gov. Ralph S. Northam (D) on a new bridge.

“Changes to P3 oversight could seriously jeopardize or delay Maryland’s ability to deliver on the non-partisan,  bi-State Capital Beltway Accord to replace the American Legion Bridge,” MDOT wrote, adding, “There is no credit, bond rating, or financial risk to the State.”

To buttress his belief that defenders of the governor’s plan are fighting an uphill battle, Kane claimed that legislators were taking photos of one another testifying before the committee but “no one is taking pictures of opponents.”

She suggested that some critics of the Assembly’s bills were advancing “cookie cutter arguments” rather than addressing the specific aspects of each proposal.

“Legislators legislate,” she said, “so we will re-open laws. We do re-open laws and look at them.”