Business groups had their day in the sun ― literally and figuratively ― in Annapolis on Monday, as House lawmakers began considering a measure that would extend the sales tax to several professional services.

Representatives from professional service-providing industries from across the state held a news conference and a rally to oppose a bill that would tax their work products with the aim of funding education recommendations laid out in the Blueprint for Maryland’s Future.

The afternoon appeared to be a cathartic exercise for business leaders who sometimes feel that their voices are ignored in the legislature.

Sponsored by Del. Eric G. Luedtke (D-Montgomery) House Bill 1628 would decrease the state’s overall sales tax rate by 1 percent, while dramatically increasing the scope of what is taxable to include most services, including those provided by lawyers, hairdressers, home and auto repair companies and real estate agents. If enacted, the bill would result in a $2.9 billion increase in state sales tax revenues by the 2025 fiscal year.

The tax would exclude educational, health and social assistance services.

The legislation was heard in the House Ways and Means Committee on Monday afternoon.

Opponents at a news conference Monday said it will hurt Maryland’s economy, resulting in industry decisions to relocate to other states, choose not to expand or prompt individuals to opt to contract out to competitors in surrounding states.

Christine Ross, president and CEO of the Maryland Chamber of Commerce, called the bill “the largest single tax increase in Maryland’s history.”

She said that the bill would discriminate against small businesses, who often contract their legal and financial needs to other entities. 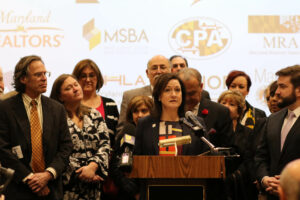 “Small and emerging companies will have to incur additional costs just to do business and to implement new tax reporting mechanisms, which will further hamper their growth,” Ross said.

Harford County small business owner Thomas Kunkel said that while Luedtke’s bill and another measure to tax certain services from Del. Lorig Charkoudian (D-Montgomery) are well intentioned, they often have adverse effects, citing the Newtonian Law of Motion ― “for every action, there is an equal and opposite reaction.”

Kunkel asserted that the legislation will impact a lot of business’ bottom lines, which often manifests in employee cuts to maintain costs and keep customers.

“These regulations do hurt small businesses,” he said. “We do survive, but yes, our employees and a lot of workers are the ones that suffer the most.”

Several business owners and leaders of trade groups argued that the bill would have a negative impact on consumers.

Maryland State Bar Association President Dana Williams said this would contribute to the “access to justice crisis,” or the growing number of citizens who can’t afford to retain lawyers as they struggle through legal battles.

Public Affairs Manager of AAA Mid-Atlantic Ragina Ali said that her organization is against taxing labor, stating that the rising costs could mean less safe traveling conditions as low-income Marylanders who may already be postponing necessary car repairs are faced with higher costs.

“We believe that this tax could actually put more unsafe cars on the roadways here in our state,” Ali said, “because people would defer that maintenance. But if you’re going to feed your family or get your oil changed, what are you going to do?”

This legislation has been the source of multiple barbs from Gov. Lawrence J. Hogan (R) in recent days. Hogan has vocally opposed HB1628, going so far as to air an attack ad last week.

In attendance at both the news conference and a rally held before the bill hearing were House Minority Whip Kathy Szeliga (R-Harford and Baltimore County) and Del. Mike Griffith (R-Cecil and Harford).

Szeliga did not speak at the press conference but did offer an “Amen!” when the Maryland state director for the National Federation of Independent Businesses, Mike O’Halloran, said he believed it was “safe to say” she is not in favor of the bill.

Attendees of the opposition rally, which was organized by the Maryland Realtors Association, voiced similar concerns as those at the earlier news conference.

According to the Maryland Realtors Association website, taxes that would be imposed on potential home buyers would be detrimental to the industry’s small businesses because of the number of services used when purchasing or selling a home, including mortgage lenders and appraisers, among others ― ratcheting up the cost buyers and sellers alike would have to incur, making home ownership less attainable.

A large crowd of stakeholders in the Maryland real estate market gathered outside of the Annapolis Treasury building in the early afternoon to rally in opposition to the bill, holding signs and chanting: “No more taxes! Kill the Bill!”

According to the Maryland Realtor’s Association website, in 2018 the real estate industry provided over $9 billion to local economies.

Leading members of the Maryland Realtors Association pumped up attendees.

“$9 billion is enough,” Maryland Realtors Association Secretary Craig Wolf said through a bullhorn. “We need to be united in our voice and our passion. $9 billion’s enough.”

Dick Stoner, a real estate broker from Rockville, said that the legislation will make buying and selling homes much more challenging.

“You’re making it more difficult for first-time buyers to buy a home; you’re adding complexity to the transaction, which is already very complex and full of nuances. And by taxing services you’re impacting homeowners from our realm more than any other group,” Stoner said.

Gwen Henderson of the Greater Capital Area Association of Realtors said that she believes the bill will affect the wrong people.

“I believe there are other opportunities for our legislators to find the funds without burdening our homeowners and the real estate industry,” said Henderson in an interview. “Enough is enough.”