Students, alumni, professors and supporters packed a House committee room on Tuesday in support of a bill that would end the state’s long-running lawsuit over resources for historically black colleges and universities ― and direct an additional $577 million to the schools over the next decade.

House Speaker Adrienne A. Jones (D-Baltimore County) is sponsoring the bill and she agreed that it is rare  to attempt to resolve ongoing litigation by legislation.

“However, we have now been litigating and mediating for years. At the same time, we have lost time for tens of thousands of students waiting for the legal process to resolve itself,” she said. “We need to act now to level the playing field for all students regardless of background or race or college they attend and end the case for the betterment of every student.”

Jones’ House Bill 1260 would require Maryland’s governor to distribute $57.7 million annually to Maryland’s HBCUs from the 2022 budget year through 2031. Sen. Charles E. Sydnor III (D-Baltimore County) has cross-filed the bill in the Senate.

That financial agreement would take effect if the state and the Coalition for Equity and Excellence in Maryland Higher Education reach a formal settlement by Dec. 1.

The Coalition for Equity and Excellence in Maryland Higher Education first filed a lawsuit in 2006, alleging that the state had failed to dismantle vestiges of segregated higher education, including by underfunding the state’s four historically black institutions and by allowing traditionally white state universities to continue creating new degree programs that duplicated programs at HBCUs.

In U.S. District Court, the coalition prevailed on claims that program duplication had perpetuated segregation of Maryland’s higher education system. The court also found that HBCUs were not underfunded compared to traditionally white institutions, at least in part as a result of the state’s earlier partnership agreement with the U.S. Department of Education’s Office for Civil Rights to boost funding and educational opportunities at HBCUs.

Since the 2013 District Court decision, the state, advocates, courts and mediators have failed in efforts to settle on a funding amount that would address degree duplication and allow HBCUs to develop unique programmatic identities to attract a larger and more diverse student body.

“We work on some of the most major civil rights cases of our time,” said Jon Greenbaum of the Lawyers’ Committee for Civil Rights, who is co-counsel on the case. “But even within that, this is an unusual case. We’ve put more time into this than any case this century.”

He and Michael D. Jones, also an attorney for the coalition, urged the committee to pass the bill to end the legislation. 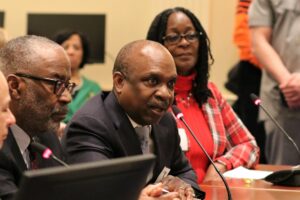 Michael D. Jones, who has represented the Coalition for Equity and Excellence in Maryland Higher Education in a 14-year court battle over HBCU funding, testifies before the House Appropriations Committee on Tuesday. Photo by Danielle E Gaines.

Michael Jones sparked the most recent round of legislative debate about a settlement in September, sending a letter to lawmakers urging the state toward the $577 million settlement.

The administration of Gov. Lawrence J. Hogan Jr. (R) offered a $200 million settlement in response, noting that the coalition’s claims of underfunding weren’t supported in the court’s opinion.

The speaker’s bill would allow the state’s HBCUs to use the additional funding to establish new degree programs, invest more in scholarships and financial aid, recruit new faculty and increase marketing, among other things. Funding would be based on enrollment at each of the state’s HBCUs. In 2022, the increased funding would be:

The bill also requires that attorney’s fees ― currently estimated at $22 million ― be paid through the increased funding in 2022.

Attorneys for the coalition asked the committee to amend the bill to include a minimum of $10 million in funding for each campus in each fiscal year, to help with long-term planning.

All four of the state’s HBCU presidents were on hand to testify in favor of the bill on Tuesday.

“It’s my sincere hope that this monumental legislation will indeed become law,” said Mickey Burnim, interim president at Coppin State, who has worked at three of the state’s four HBCUs. “HB1260 affords the unique opportunity to address decades of previous untraceable and traceable state-supported inequities and the unnecessary duplication in programs at HBCUs in the state.”

Alumni from the institutions crowded the hearing room to testify about how educational opportunities at the state’s HBCUs changed their lives.

“Just a few years ago, I was a Maryland public school student sitting in classrooms that were being taught by well-meaning teachers who I felt misrepresented my history, ignored my culture, and didn’t care to understand my background,” said Kayla Moore, a 23-year-old second-grade teacher at University Park Elementary School in Prince George’s County and a graduate of Coppin State.

“…However, HBCUs offer these students a second chance. They provide the support from a strong HBCU community that students of color might not have previously received unless they had a passionate educator,” Moore said.

She referenced the state’s efforts ― including through proposed Kirwan Commission education reforms ― to diversify the ranks of public school teachers and the role that HBCUs could play in those goals.

“Our HBCUs need more. For too long they have been asked to do more with way less,” Moore said.

“You are an example of what we want to move toward in Maryland,” McIntosh told her, prompting applause from the committee room.