The state’s cost estimate for toll lanes to be built by a public-private partnership on Interstate 270 and the Capital Beltway has jumped from $7 billion three years ago to as much as $11 billion now. And previous, more detailed, state studies of parts of the plan point to costs far higher than $11 billion.

Public investments of such great magnitude demand prudence, impartiality and transparency. What we have seen is a process sadly lacking in those attributes.

Since Gov. Hogan first proposed his toll lane project in 2017, many have felt that Transurban, the giant Australian company that holds P3 contracts for the Beltway and I-95 toll lanes in Virginia, has the inside track in Maryland. Last April 26, The Australian, one of that country’s largest newspapers, described Transurban as “the clear favorite” for the Maryland contract.

Events since then have only confirmed that conclusion. Transurban has deployed cash, political pull, and economic muscle to shape the future toll lane contracts and the process by which they will be awarded. And these efforts, unmatched by any potential competitor, have borne fruit. We believe the Hogan administration has repeatedly altered its plans in ways that favor Transurban at the expense of Maryland taxpayers.

Under state law, procurement of a P3 contract begins with review by the General Assembly’s budget committees of a “Pre-Solicitation Report” (PSR) setting forth the nature of the project and the bidding process. After that review is complete, the Board of Public Works votes on the PSR.

But the review of this giant project has been in vain. Major amendments that fundamentally change the procurement process have been repeatedly approved by the BPW without legislative review.

On April 26, just hours after the article appeared in The Australian, the BPW agenda unveiled a “PSR Supplement” containing “Key Terms of the proposed P3 Agreement.” One of these terms states that if the contract is canceled due to non-performance by the contractor, the Maryland Department of Transportation “will pay partial compensation to the [contractor]’s lenders.” This was directly contrary to the governor’s previous assurances that the contractor will bear the entire risk of project failure. This amendment was later approved as part of the 2-to-1 BPW vote in June.

That, it seems, was not enough to satisfy Transurban. On April 29, the chief of Transurban’s U.S. operations, Jennifer Aument, told Australian investors that the company had “decided to take a pass” on the first Maryland toll lane contract because of the “complex political and economic path ahead.”

Transurban’s deeds did not match its words. After announcing its departure from the scene, the company doubled its already lavish spending on lobbying. It had paid the Annapolis lobbying firm of Perry, White, Ross & Jacobson $12,000 per month since late 2017. In the reporting period that started last May, this jumped to $27,000 per month. The Perry, White firm has received a total of $370,000 over two years.

This was precisely the juncture at which Transurban’s walk away from the table posed the greatest possible threat to Gov. Hogan’s future political ambitions. Hogan was set to become chairman of the National Governors Association in August. And the theme of his year in the role was infrastructure, especially P3s. The collapse of his signature P3 initiative would have made him a national laughingstock.

Under this pressure, the governor caved.

The first sign of surrender was a trip to Australia in September, with Jennifer Aument in his party, for the announced purpose of seeking “opportunities for economic partnerships” with Australian companies. In this quest, Gov. Hogan called on Transurban’s top executives at their Melbourne headquarters.

He took the next step on Nov. 12, unveiling a toll lane “accord” with Virginia Gov. Ralph Northam. This announcement extended the initial phase of Maryland’s toll lanes from I-270 onto the Beltway and across the American Legion Bridge, connecting them to Transurban’s Beltway toll lanes near Tysons Corner, Va. 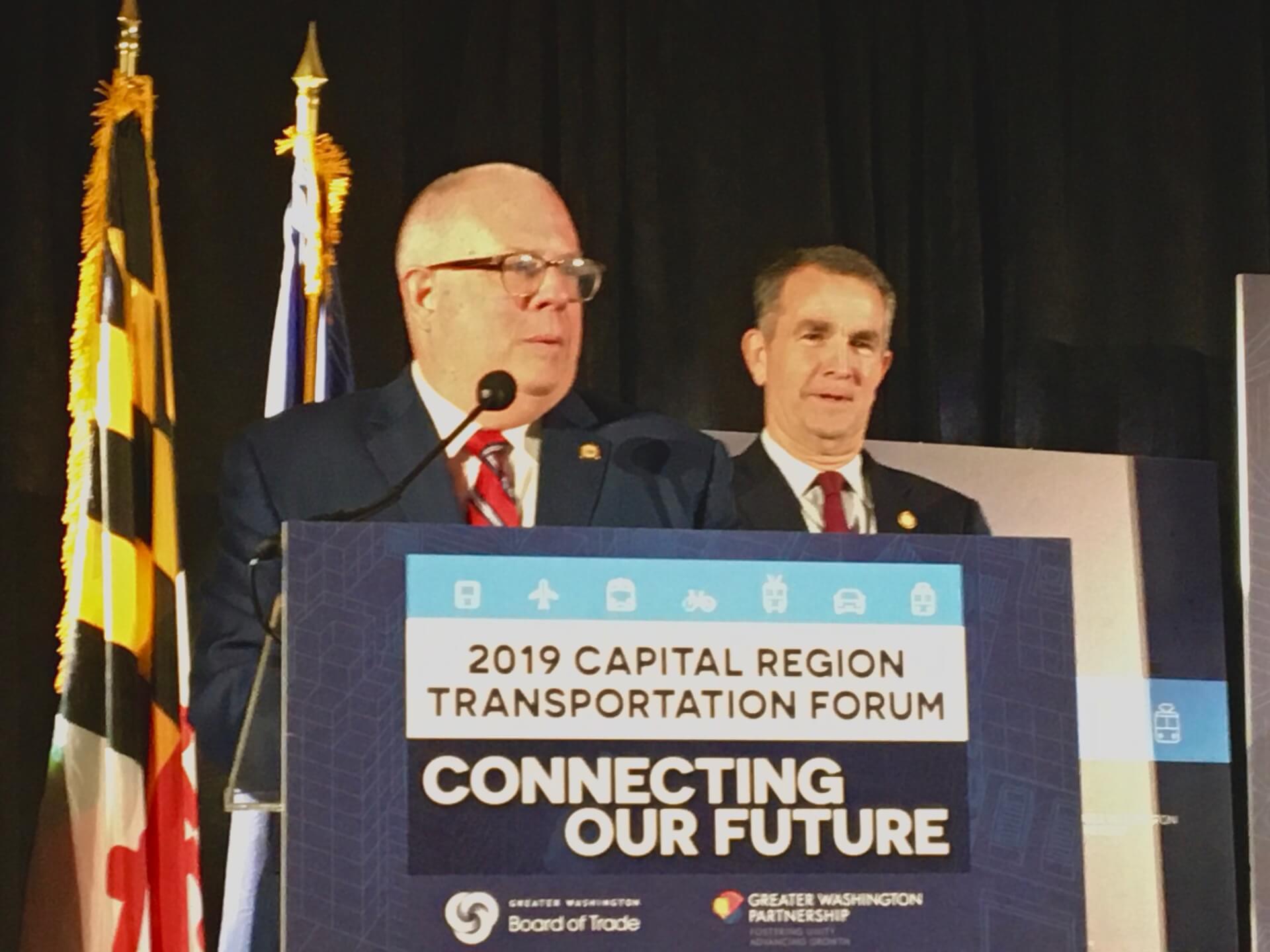 The segment from River Road into Virginia will be built jointly by the two states. This gives a clear leg up to Transurban, already chosen by Virginia as its contractor for this work.

Putting the bridge first required the Board of Public Works to amend its previous approval of the PSR. After a delay due to hesitations by Comptroller Peter Franchot, this was obtained by a 2-to-1 vote on Jan. 8. Buried in the fine print of the amendment were changes in the procurement process whose full meaning was yet to be revealed.

What Governor Hogan described at the time as a “once‑in‑a‑generation achievement for the capital region” turned out subsequently to be an unwritten oral agreement. Last Friday’s RFQ describes it as merely an “intention to enter into” an accord.

But this week Transurban CEO Scott Charlton let the cat out of the bag. In a conference call with investors, he said flat-out that “Transurban would be the developer of that project with the two governments.”  In answer to a later question about the accord, he added that “we’re working in partnership with the Maryland government and Virginian government to deliver that and we’ll go to tender on the construction.”

The full scope of Gov. Hogan’s capitulation to Transurban is only now emerging. Just a few days ago, in a classic 7 p.m. Friday bad-news dump, MDOT revealed a complete rework of its bidding process. This news was buried in the text of the Request for Qualifications (RFQ) that kicks off bidding on the contract.

Under the original plans, MDOT was going to issue a Request for Proposals for each roadway segment to several qualified teams. Each bidder would come up with its own design for the road, seeking innovations to cut costs and improve results. The bidders would estimate the cost of the road, line up financing, and offer payments to the state. MDOT would evaluate the proposals, negotiate, and sign a 50-year contract  with the bidder that offered the best deal.

This has now been thrown out the window. Instead, MDOT will choose a “phase developer” to sign what other states call a “pre‑development agreement” (PDA). After the PDA is signed, the phase developer will design each toll lane segment, determine construction costs, run the traffic and revenue models itself, and secure financing. The contractor is supposed to pay for all this work itself. Then it will negotiate the actual contract to operate and build the toll lanes with MDOT, on a sole‑source basis with no competition.

What will happen if, as is nearly certain on a project like this, obstacles or disagreements occur along the way? We don’t know exactly, because the state is still holding back the term sheet that will become part of the RFQ. But the text of the RFQ already tells us that there will be “certain risk allocations.” In an accompanying set of questions-and-answers, MDOT tells us that the contract winner “will bear the revenue risk” that toll revenues will fall short of forecasts. State taxpayers, apparently, will have to bear all the other risks that may arise during the planning, design, and construction of the toll lanes, including if:

— Lenders won’t finance the project or interest rates are too high.

— The state doesn’t agree to contract terms the contractor demands.

— Permits are denied, or have conditions that drive up costs.

— Lawsuits delay or block the project.

— Changes in state or federal laws or policies.

— Unanticipated costs of repairs or maintenance.

It’s easy to foresee that there will be multiple setbacks of this sort in the course of a multibillion-dollar highway project. What will happen?

The governor has already demonstrated that when Transurban bluffs, he folds his hand. Transurban holds his political future hostage, and Maryland taxpayers will have to fork over the ransom.

This very scenario is unfolding as we speak in the Australian state of Victoria. Transurban is in the midst of building a highway tunnel under a P3 contract. In its contract with the state, Transurban agreed to pay the entire cost of digging up a known area of contaminated soil and disposing of it off-site. It turns out that this will cost a half-billion dollars more than expected.

Work on the tunnel has now stopped because Transurban refuses to pay its construction contractors for the extra work. Local newspapers already foresee Victoria’s taxpayers getting stuck with the bill.

As the former auditor-general of another Australian state once said of Transurban, “When they leave a negotiating room nothing is left on the table, not even the Laminex.”

The writer is chair of Maryland Transit Opportunities Coalition and author of “Dead End: Suburban Sprawl and the Rebirth of American Urbanism” (Oxford University Press, 2015).