Fifth in a series

Imagine you board an airplane in Maryland to go to Los Angeles. Everything is fine until you reach Amarillo, Texas, which is roughly 60% of the way there. The plane banks sharply and lands at the Amarillo International Airport, where you and the other passengers are forced off the plane.

The pilot tells you to show a little gumption and find your own way to Los Angeles. It isn’t until you reach the Mojave Desert, dragging your baggage behind you, that your anger and frustration finally subside. Instead you now feel joy because you finally understand Maryland’s 61% solution!

If you are poor and qualify for help from Maryland, the state uses its own poverty level called the Minimum Living Level (MLL) to determine exactly how much money you will need to survive. It then gives you exactly 61% of that amount. The other 39% you and your children will need for food and a place to sleep is up to you. 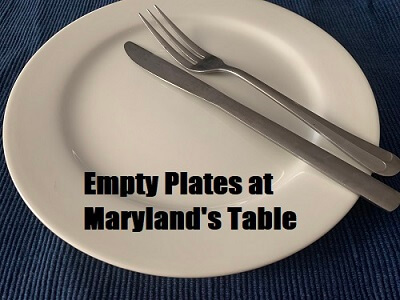 If this seems unbelievable, below is the testimony of Lourdes R. Padilla, head of the Department of Human Services, before the legislature on February 8, 2019 describing Maryland’s 61% solution:

As bizarre as this calculation is, it is actually worse than it first appears. As Padilla explained, the amount you receive is based on a percentage of the MLL. But what does the state think you can survive on? Last year the state said that a family of three could live on a yearly income of $23,232. MIT’s Living Wage Calculator puts that number closer to $69,000.

That means the most a family of three in Anne Arundel County will receive both in monthly food stamps and cash assistance is a total of $1,181. That might be enough to rent a one-bedroom apartment according to the federal government’s fair market rent calculation. But everything else – food, childcare, transportation, health care – will be out of reach.

It is an oddly exact number, as if it is based on some abstruse economic theory of poverty. Why not 59% or 62%? Why any percentage at all? In fact, part of the answer to that can be found in the basement of the Maryland Law Library on a roll of microfilm from 1996.

That was a momentous year for those living in poverty. Since 1980, when President Reagan was elected, pressure had been building to change the welfare system. In 1976 Reagan had introduced a “welfare queen” as the symbol of what he characterized as a hopelessly corrupt system and, when he became president in 1981, he spent his first year in office cutting benefits to the working poor. That was followed in 1994 by U.S. House Republicans’ “Contract with America,” which among other things said those receiving welfare should be required to work and that no one should be on the public dole for longer than five years.

But it wasn’t until 1996 that President Clinton brokered a deal with a Republican Congress to reform the welfare system. Instead of being run by the federal government as Aid to Families with Dependent Children (AFDC), Washington would instead hand over block grants to the states that, within limits, would design their own welfare programs. The new federal program was called Temporary Assistance for Needy Families (TANF).

And that is when welfare landed in the laps of the Maryland legislators.

On the microfilm are all the reports, memos and briefing papers that were passed back and forth between lawmakers as they tried to rewrite the state’s welfare laws. And in nearly all the discussions of amendments, one that kept cropping up was Amendment No. 9.

Amendment No. 9 says the governor must provide “sufficient funds in the budget to ensure that the value of Temporary Cash Assistance (TCA) combined with federal food stamps is equal to at least 61% of the state minimum living level.”

A report from the House Appropriations Committee on April 5, 1996 explained that the amendment would “create a floor to assistance to provide minimum standards of health and welfare.”

Not surprisingly, after more than two decades the memory of that debate has faded. State Del. Samuel I. Rosenberg (D-Baltimore City), who was a key figure in that debate, said recently, “I have no idea why 61%.”

Staffers in the Department of Legislative Services, who helped write the bill, are also unable to explain where the 61% number came from or why it was thought necessary.

But there may be a clue in the numbers themselves. At the time that the old AFDC program was scuttled, a family of three in Maryland got a monthly benefit equal to 63% of the Federal Poverty Level, or $686. It seems more than coincidental that under the new law – 61% of the MLL – a family of three got an almost identical amount: $675.

Rather than monkey with changing the benefit, legislators may have just opted to leave things as they were. And while they talked about a floor, they actually meant a ceiling.

On July 1, 2019, a new law went into effect that allows at least a portion of child support to go to the family without affecting their TCA benefits.

‘I didn’t read the fine print’

But what does living on a ceiling actually feel like?

Joanne (not her real name) of Glen Burnie found out 17 years ago when she was 26 years old.

“It was right after my first son was born,” Joanne explained. “I’d had a difficult pregnancy. I was sick and I was having a hard time finding work. I needed some way to buy diapers so I found out about TCA. OK, I can apply for this and get some money every month.“

Although Joanne said the TCA payments were not a lot, they could have been enough because she was living with her grandmother at the time and was receiving child support from the child’s father.

“When I was getting it, I didn’t read the fine print,” Joanne said. “They made me sign over the child support.”

It is a practice that continues today. On the Maryland Department of Human Resources website, people applying for TCA are told “if the custodial parent receives Temporary Cash Assistance (TCA), any child support payments collected will be kept by the state as reimbursement for that benefit.”

“It’s like they’re more money hungry than anything because that makes absolutely no sense. If this [money] is what you’re supposed to be literally surviving and eating off of, why would you keep taking money literally out of my child’s mouth?” Joanne argued.

Because the TCA money was inadequate, Joanne said she turned to “supplemental agencies.”

“When I couldn’t afford diapers anymore, I would get it from Birthright (a nonprofit that helps pregnant and new mothers). I would get something from WIC and whatever I could get with WIC I would get. That’s something I don’t have to buy with the food stamps and then I can use the food stamps on other things like milk and cheese and beans and peanut butter. So it was a whole lot of finagling money around trying to just from all of these sources gather enough stuff to be able to survive.”

Local food banks were a main source of food.

“I don’t want to speak ill about them because, first of all they’re giving you what they’ve got,” Joanne said. “But every last bit of it is throw-away food. They’ll say that you can get like fresh produce. Well, you get produce but it’s not really fresh. A lot of that stuff you can cook it the same day. It might be OK. But none of it’s going to keep because, like, when they give you a bunch of greens like kale or something, it’s already starting to turn yellow.

“They give you the stuff that the stores throw away. The meant what they give you is the meat that didn’t sell because it’s past the sell-by date. You can’t really use any of that. There’s one place that will give you birthday cakes. Like if it’s your birthday, they’ll tell you you can go and get a cake. But those are the ones that the store didn’t sell and they’re rotten. I mean, really, who wants moldy food, but that’s what you’ve got.”

After eight months Joanne said she was able to find a job and left TCA. But she said TCA didn’t leave her. For months after she left TCA, the state kept putting her child support payments in the state’s coffers.

“They just kept taking it to the tune of $1,500 that they actually gave back to me,” Joanne said. She says she is still owed $500 but she got tired of fighting the state.

Today Joanne has six children, five of whom have epilepsy. Because she spends her time caring for her children, going to work is out of the question. But she will not apply for TCA. Instead she cobbles together money from food stamps, her children’s’ Social Security disability payments and child support to keep her family afloat.

Though she is married, she and her husband do not live together. “The traditional goal of anybody in America is to have a family. But if you have a family, they don’t help you,” Joanne observed. “It is literally designed to keep you a single mother. If he lives with me, they will count everything of his as mine and there won’t be enough income.”

And feeding her children continues to be a struggle.

“Another thing that I do is – I know this sounds really bad – I let the kids eat at school because that cuts down on the amount of food that I have to get,” Joanne said. “I’ve seen what the school gives them and it’s not exactly nutritionally sound and then it’s never enough. They’re always hungry at school and they want to come home and eat. I’d like to be able to pack them lunches, but the truth is I really can’t afford to do that.”

At home Joanne says she always provides a meal with “protein, starch and a vegetable.”

“There has never been a time where everybody was completely hungry but there’s been a lot of times where, like one of my daughters opens a can of corn and eats that for dinner because we don’t have any more bread.”

“They have people go and talk to lawmakers but that’s not going to change anything. People that get listened to aren’t people that get TCA. They won’t listen to me because they look at me like, ‘why didn’t you do better? Why are you on the system? You’re not worth my time.’”

And perhaps that is how the floor became the ceiling.

Part three: Measuring Hunger: One Size Does Not Fit All, plus Calculating How to Go Hungry