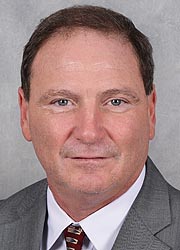 In an interview, Impallaria described himself as a strong supporter of President Trump and said he was well-equipped to work with the administration to help the district with its priorities, including building a new bridge over the Chesapeake Bay, cleaning up the Baltimore harbor, and public safety.

Impallaria was unapologetic about jumping into the race after Salling has been running for half a year.

“It’s good to have a respectful debate on the issues and let the public decide who should carry the fight forward,” he said.

This is not Impallaria’s first congressional bid: He also ran for the seat in 2012, finishing second to then-state Sen. Nancy Jacobs in the GOP primary with 24% of the vote — winning every precinct in his legislative district.

Impallaria was elected to the House of Delegates — the same year Ruppersberger, then the departing Baltimore County executive, won the 2nd District seat in Congress. While the district, which takes in parts of Anne Arundel, Baltimore, Harford and Howard counties and a sliver of Baltimore City, has conservative pockets, it is a Democratic stronghold overall, and Ruppersberger has never won reelection with less than 61% of the vote.

“That doesn’t mean we shouldn’t get a good, viable candidate,” Impallaria said.

Asked if he had fundraising goals for the campaign, Impallaria said he wouldn’t really focus on it until the General Assembly session ends three weeks before the primary.

“Right now I’m going to concentrate on what I have to do in Annapolis and move forward,” he said.

It’s not as if Salling had been raising huge sums of money: As of Sept. 30, the last Federal Election Commission campaign finance report deadline, Salling had filed no finance statement, meaning he had yet to raise $5,000. Ruppersberger, on the other hand, reported $1,034,275 in his campaign account at the time.