“We’re really proud for you all to be here today — excited about the possibilities and opportunities of being a real regional provider of health care services,” Nelson said.

The expanded operation opened in October, and center manager Fabiola LeBarron says she’s already noticed an increase in productivity. Despite maintaining the same staffing levels, even with the bigger space, LeBarron says medical assistants and clinicians are seeing between 25 and 28 patients each day, compared to the daily average of 20 they were seeing before.

LeBarron said that this facility sees around 4,400 patients annually. With the opening of the new facility, the organization anticipates a 66% increase in traffic.

During the 2018 fiscal year, Planned Parenthood of Maryland reported serving 30,000 people across all seven of its locations. Besides Annapolis, the organization has clinics in Baltimore, Easton, Frederick, Owings Mills, Towson and Waldorf.

Health center employees and supporters gathered in the newly expanded waiting room as local and state lawmakers expressed their support for the new facility and Planned Parenthood’s mission. Many speakers emphasized the economic importance of health care accessibility and funding.

“I come from a country … that has a national health system,” said Annapolis Mayor Gavin Buckley (D). “It is the most important thing you can do — a basic human right. And thank you for standing up for those human rights.”

LeBarron said 40% of the patients who come to the Annapolis facility don’t have health insurance.

“I have this theory that effectiveness of government — and really the people — shouldn’t be based on the size of your tax base … but measured by the health and wellness of the people that you serve,” he said.

“Access to safe, affordable, quality health care is not a women’s issue: It is a family and economic issue,” she said. “And ensuring that our constituents and … frankly, folks from across the state, can come here and receive that health care is so critically important to the health of our state.”

Planned Parenthood of Maryland began offering sex education services in the Annapolis area in 1969 and opened its first clinic in the city less than a decade later.

The facility today features nine examination rooms — five more than previously offered — each with expanded seating for patients’ partners and children. The walls are adorned with prints featuring different aspects of sexual and reproductive health, like minimalistic intrauterine devices and condoms. The patient recovery area, for individuals who receive abortions or IUD insertion procedures, has expanded from from four chairs to 10.

“It’s really about making the patients more comfortable, and having the space to see more patients and in a more efficient way,” she said. 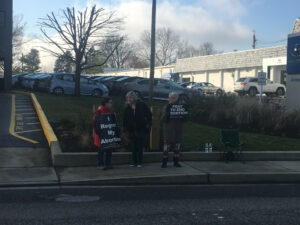 Not everyone showed up to celebrate the opening. A handful of abortion rights opponents gathered outside the West Street facility with signs, and in some cases, rosaries.

“It’s insidious what they do to get women coming to these places.”

“I know that the state of Maryland and Anne Arundel County have a health department that provides services for women,” she said. “It’s part of our tax dollars that pay for that. So the number one activity that happens in this building is abortion.”

Anti-abortion advocate Karen King, who said she had a procedure at a Planned Parenthood clinic in 1975, said that she “cleared her calendar” to be outside of the new facility for its ribbon cutting.