Skip to main content
Who would have thought, as the last decade dawned, that a real estate guy name Donald Trump would become president of the United States? Or that a real estate guy named Larry Hogan would become governor of Maryland? (Well, Hogan probably thought it.)
At the beginning of 2010, Sheila Dixon was mayor of Baltimore. Mike Miller and Mike Busch were firmly in command in Annapolis. Martin O’Malley thought he could work his way to the White House through policy initiatives and song.
In January 2010, no one had heard of David Trone or John Delaney, except maybe as Democratic donors. Donna Edwards was in her first full term in Congress. Outgoing Prince George’s County Executive Jack Johnson had only recently been indicted, and we were titillated by the image of bribe money being flushed down the toilet and stuffed into a brassiere.
A decade later, Trump is in the White House and Hogan may have presidential ambitions all his own. Baltimore has had three more mayors since Dixon was forced to resign in early 2010, and they’ve all had their share of troubles. By April, city Democratic voters may tee up yet another mayor.
The passage of a decade is always a wondrous thing — and a time to reflect. But political time never really corresponds to reality. As 2019 reminded us in Maryland, life is fragile — and what once seemed like political stasis became significant change almost overnight.
Hogan’s surprise election, in 2014, felt wildly consequential at the time. In some ways it was and in other ways, it wasn’t.
Hogan’s win then was chalked up to a bad political cycle for Democrats and a bad — or at least uninspired — Democratic gubernatorial nominee. That narrative still works today, to a degree.
But we have more insights now.
In some ways, Hogan’s rise may have presaged Trump’s. Vast swaths of the electorate were fed up with the leftward drift of the state, with taxes, with Baltimore, with socially liberal legislation, and Hogan harnessed that angst and anger perfectly. Hogan’s election — and maybe more significantly, his reelection in 2018 — served as a sobering reminder for progressives that Maryland isn’t quite the state they want it to be.
And while no one doubts that another Democrat will be elected governor again — maybe as soon as in 2022 — several Republican victories in the 2010 and 2014 elections seem irreversible today.
There are many legislative districts and county government seats, once held by Democrats, in Western Maryland, the Eastern Shore, and the Baltimore exurbs, that almost certainly will never the return to the Democratic column. But some of the political trends of the Trump era — with suburbs becoming increasingly difficult territory for the Republicans — have taken hold here, as places like Anne Arundel and Howard counties went shockingly blue in 2018.
Hogan’s own legacy is more difficult to calculate, as he enters the second year of his second term. He once compared his job to that of a hockey goalie, blocking bad pieces of Democratic legislation. 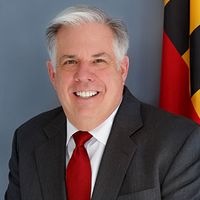 Hogan has been an impediment, yes, to certain progressive priorities. But there are still veto-proof majorities in both chambers of the General Assembly, and Democrats in many instances have taken to ignoring the governor altogether.
Hogan has built a remarkable political brand, largely divorced from the Republican Party of the 2010s, and he remains as popular as ever. But while he’s a master of marketing himself, and of branding his political opponents and policies he doesn’t like, he shies away from political combat most of the time save for throwing an elbow here and there. And he still seems unwilling to invest any of the political capital he’s amassed or do the hard work necessary to truly achieve the bipartisanship he talks so fondly about.
Speaking of which, the bromance between Hogan and Comptroller Peter Franchot (D), which came to define state politics over the past half-decade in many ways, already seems like a relic of the past, as the principals’ political imperatives shift in the 2020’s.
Democrats entered the last decade racked by scandal — see Johnson and Dixon — and enter the new decade the same way (see one of Dixon’s successors, Catherine Pugh). In between there was the usual penny-ante stuff that brought prison time for hapless lawmakers like Nat Oaks, Will Campos, and Michael Vaughn.
Of course, Republicans had John Leopold and Blaine Young.
Certain political characters came and went. Remember when Dan Bongino was considered a hot political commodity? He’s now a Florida resident and spitting venom on Fox News. Remember when Heather Mizeur was going to mix her blend of New Age spiritualism and prairie populism to lead progressives to the promised land? Remember when Otis Rolley — very possibly the skinniest political candidate in all of Maryland history — was going to reform Baltimore?
Maryland lost several political heavyweights in the past decade, including Busch, William Donald Schaefer, Harry Hughes, Helen Bentley, Wayne Curry, “Young” Tommy D’Alesandro, and Clay Mitchell.
Two other giants departed: Barbara Mikulski, a historic and trailblazing figure in Maryland and on Capitol Hill, showed the political world how to leave on one’s own terms and while still on top. She’s still offering her political muscle and star power and expertise when asked.
Finally, there was Elijah Cummings.
Rare is a Marylander’s death such important national news, but that was Cummings, who came from humble beginnings, rose to the very top of the national political ladder, but never lost touch with his community or forgot where he came from.
Cummings was a man of giant oratory and small kindnesses. He appealed to everyone’s better sensibilities. On a personal level, he wasn’t perfect, but that was the point.
Through history, politicians have risen from abject poverty to become formidable, effective leaders. But Cummings’ powerful story was of a particular time and place. We won’t be seeing the likes of him again.
What will we be looking back on in Maryland, a decade from now? Let’s see if we can survive 2020 first.
[email protected]
Tags: Barbara MikulskiBlaine YoungCatherine PughClay MitchellDan BonginoDavid TroneDonald TrumpDonna EdwardsElijah CummingsHarry HughesHeather MizeurHelen BentleyJohn DelaneyJohn LeopoldLarry HoganMartin O'MalleyMichael VaughnMike BuschMike MillerNat OaksOtis RolleyPeter FranchotSheila DixonThomas D'Alesandro IIIWayne CurryWill CamposWilliam Donald Schaefer
Share Tweet Share Email Print