Editor’s note: This story has been updated to reflect numbers provided by the Maryland Department of Human Services and estimates from a state advocacy group.

The Trump administration this week finalized a regulation that could knock more than 6,000 Marylanders off food stamp benefits.

It’s one of three controversial policies the administration is pursuing that aim to limit eligibility for Supplemental Nutrition Assistance Program (SNAP) benefits that could ultimately result in nearly 100,000 Marylanders losing food assistance.

The administration has portrayed the effort as a push to boost self-sufficiency, but critics have labeled it a cruel attack on an important anti-hunger program.

“Most Americans who receive SNAP benefits already are working, but they do not make enough to make ends meet for their families,” U.S. Sen. Benjamin L. Cardin (D-Md.) said in a statement this week. “This is a tragedy in itself, but now, President Trump’s heartless proposal will hurt families and our local economies by taking away the states’ abilities to determine what works best for their population.”

The U.S. Department of Agriculture’s final rule would tighten food stamp eligibility requirements by limiting states’ ability to grant waivers that extend benefits in areas with high unemployment. The administration estimates that about 688,000 people nationwide will lose access to nutrition benefits under the new regulation.

That could include about 6,300 people in Maryland, according  to an analysis of the proposed rule by the Urban Institute.

But the state Department of Human Services — the agency which administers the program in Maryland — pegs the number at 23,664. The advocacy group Maryland Hunger Solutions puts it at closer to 30,000.

Combined with two other pending regulations to restrict SNAP access, the administration’s policies could lead to 3.7 million fewer people receiving food stamp benefits nationwide, including about 79,600 people in Maryland, according to the Urban Institute analysis of the proposals.

Using state government and Maryland advocates’ figures, the number could be closer to 100,000.

U.S. Agriculture Secretary Sonny Perdue called the regulation finalized this week an effort to “move more able-bodied” food stamp recipients “towards self-sufficiency” and into employment. “We need to encourage people by giving them a helping hand but not allowing it to become an indefinitely giving hand,” Perdue said in a statement.

But Maryland Democrats and other critics have assailed Trump’s policies.

He said in a statement, “Make no mistake: this rule will not create jobs or help anyone find work – it’s designed to punish unemployed or underemployed workers for falling on hard times and not being able to find a job, and we know that this rule will disproportionately affect communities of color, rural areas, and other places where good jobs are scarce.”

Federal law limits the time frame for the receipt of SNAP benefits by “able-bodied” adults between the ages of 18 and 49 who don’t have dependents or a disability. They can receive benefits for three months in a 36-month period unless they meet certain work requirements, according to USDA. 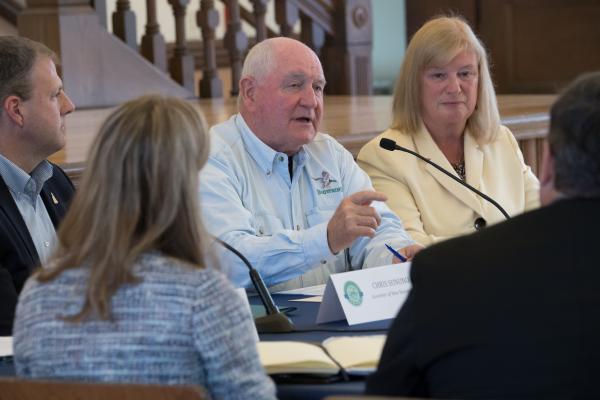 States are allowed to waive those limits in areas where there’s high unemployment or sufficient jobs aren’t available, but the Trump administration said that states have “taken advantage of” weaknesses in the current regulations to request waivers in areas where it’s “questionable” whether there’s indeed a lack of sufficient employment.

“SNAP is the nation’s most effective anti-hunger program and critical to helping low-income families address the effects of poverty,” said Alexandra Cawthorne Gaines, vice president of the Poverty to Prosperity Program at the Center for American Progress. “Yet three times this year, the Trump administration has ruthlessly tried to take food off the tables of struggling families.”