Seven people, including two children, perished during a fiery explosion at the Flower Branch Apartments in the Long Branch neighborhood of Silver Spring on Aug. 10, 2016.

They didn’t have to die.

The piece of equipment that failed and led to the chain of events that resulted in the tragedy wasn’t meant to be there.

A lengthy investigation by the National Transportation Safety Board (NTSB) into the cause of the explosion concluded it was the failure of a mercury service regulator (MSR) left unconnected to a venting pipe. As gas escaped from the regulator inside the apartment building at 8701 Arliss St., it couldn’t vent to the outside and so built up to an explosive level until it ignited.

The late-night explosion destroyed two buildings in the apartment complex, which is mostly home to low-income people struggling to make ends meet in the busy crossroads of an increasingly diverse community.

The MSR and the venting pipe were owned and operated by Washington Gas and in two separate cases before the Maryland Public Service Commission, the company sought rate increases and promised that by 2013 every MSR in dwellings across the state would be removed and replaced.

Included in that promise was the MSR that failed at 8701 Arliss Street.

The commission’s technical staff determined that if Washington Gas had fulfilled its MSR replacement program commitment, that regulator would have been removed three years before the explosion.

As a result of NTSB’s findings, the PSC directed Washington Gas to show why the company should not be held in violation of two requirements: a Maryland regulation requiring them to exercise reasonable care to reduce hazards to consumers and the general public and another requiring the utility to furnish equipment that is safe.

In its response, Washington Gas claimed that it did exercise reasonable care to protect public safety and requested the commission refrain from imposing a fine or penalty. The company also disputed NTSB’s findings and cited evidence gathered by experts that showed the cause of the Flower Branch explosion should have been deemed undetermined.

The PSC’s technical staff evaluated the company’s response and determined that because it was Washington Gas equipment that was cited by NTSB as the probable cause for the tragedy, Washington Gas “may be in violation” of the Maryland code regulation for failing to take reasonable care to protect the public from hazards.

The Office of People’s Counsel, which represents consumers in matters relating to utilities in Maryland; the Apartment and Office Building Association of Maryland; and the Montgomery County Attorney’s Office were also prompted by the response from Washington Gas to write to the commission and request action. All three urged the PSC to impose penalties on Washington Gas.

At the heart of the debate as to whether Washington Gas exercised the care required to protect the public is the MSR, a piece of equipment containing a small amount of mercury, installed in thousands of homes and apartment buildings across the state of Maryland decades ago to regulate the pressure of natural gas going to home appliances. As time went on and technology evolved, MSR’s were phased out in buildings constructed after the mid 1960’s.

Washington Gas had started replacing MSR’s with the newer regulators even before the company came before the Public Service Commission in a rate hike case in 2002. As part of that case, the company stated there were 66,793 MSR’s in both homes and multi-family units across Maryland and promised they would all be replaced with newer, non-mercury filled regulators by 2013.

The rate case ended in a settlement agreement and included was a stipulation that “the change out of mercury regulators was in the public interest.”

Within a year Washington Gas was back before the commission asking for another rate hike. Again, the company promised it would replace all the existing MSR’s across the state of Maryland within a 10-year period and said now there were 42,735.

“This program was instituted because of the age of the mercury regulators, between 40 and 60 years old, and concerns expressed by the Environmental Protection Agency about mercury regulators inside homes,” Hardeep S. Rana, chief engineer for Washington Gas, explained to the commission at the time.

As part of its MSR replacement program from 2003 to 2007, Washington Gas recovered $654,000 annually from ratepayers, resulting in a total of $1.962 million for the company. While the company had agreed to report on the MSR replacement program each year until its completion in 2013, only one report was filed with the Public Service Commission stating that from Oct. 1, 2002 to Aug. 3, 2003, the Company replaced 2,744 MSR’s in Maryland. 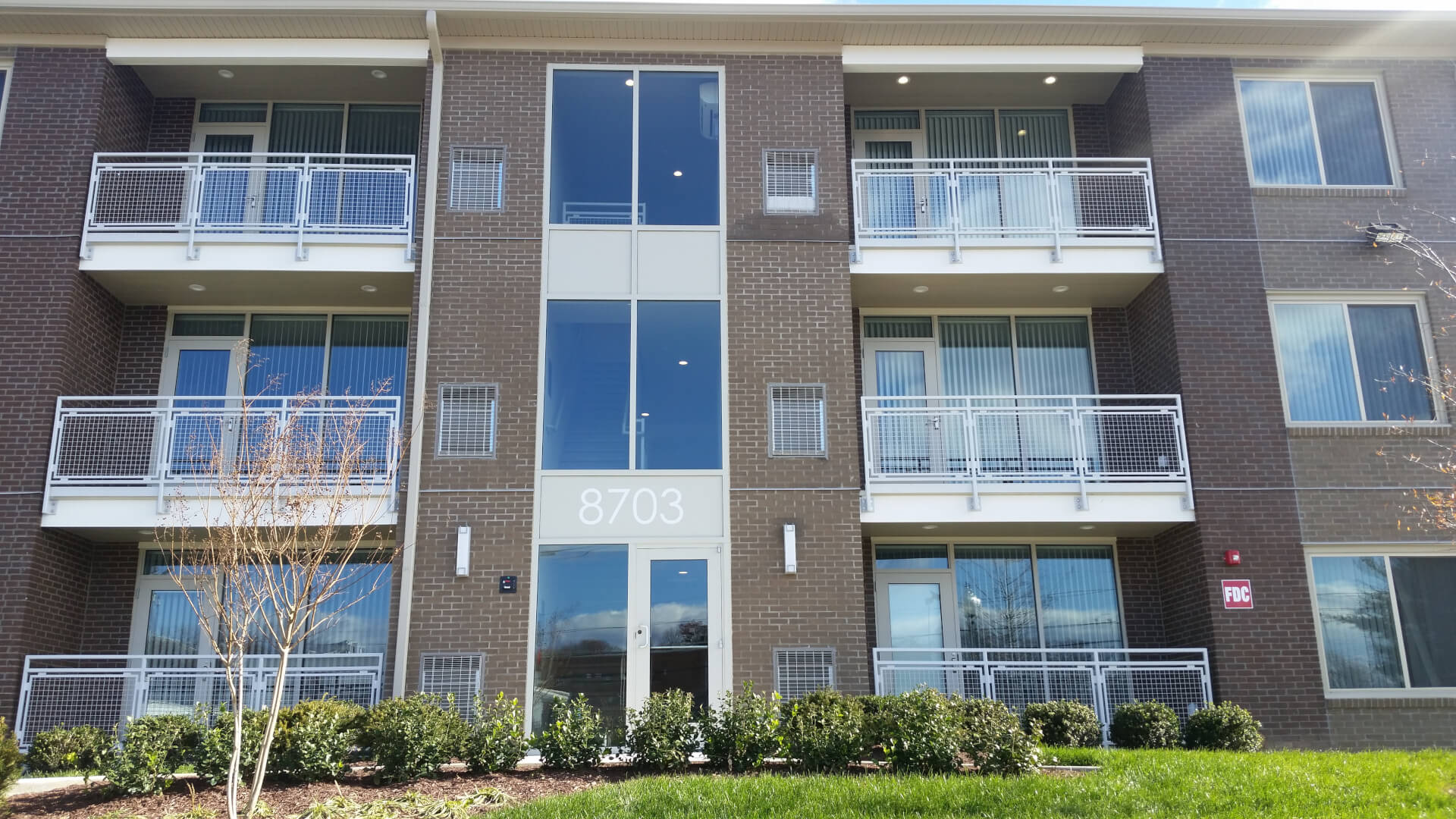 One of the refurbished apartment buildings at the Flower Branch complex. Photo by Josh Kurtz

The fact that Washington Gas’ MSR replacement program fell far short of the company’s promises even while the company was recovering funds for it from 2003-2007 only came to light when NTSB identified a failed MSR as the contributor to the cause of the Flower Branch explosion.

According to the Office of People’s Counsel (OPC), “There would be no debate in this case regarding MSR’s — or probably no case whatsoever — if Washington Gas had adhered to the 10-year replacement deadline.”

When asked why the MSR replacement promises were not fulfilled, Washington Gas stated in its response to the commission that the pace of MSR replacements slowed when the company was confronted with safety issues, such as natural gas leaks beginning in the fall of 2003.

But according to OPC, while safety issues could have impacted MSR replacement from 2003-2008, “the decline in replacement since 2008 raises the Company’s level of commitment.”

Using data retained by mercury disposal contractors from 2004 to 2013, Washington Gas estimates that 53,542 MSR’s were replaced systemwide with 29,000 of those replacements taking place in Maryland. According to the Company, those numbers are 70% of its aspirational goal for the program described to the commission in 2002 and 2003.

The commission’s technical staff disagreed with Washington Gas’ assessment that replacement of MSR’s was a voluntary or aspirational goal, and instead termed it an “undisputable commitment” on the part of the company because Washington Gas received PSC approval as part of a rate case order.

Complicating Washington Gas’ ability to complete the MSR replacement program is the fact that the company does not have precise information regarding the number of MSR’s that remain. According to OPC, “A concerning pattern over the past 17 years has been, despite acknowledgement of dangers posed by mercury regulators, the Company has continually demonstrated a lack of understanding on the exact number mercury regulators remaining on its Maryland system.”

For now, Washington Gas is identifying buildings that may contain MSR’s based on the date of construction. According to this information, there could be as many as 77,680 MSR’s in its Maryland system. Approximately 2,160 of those are in multi-family dwellings with an estimated 400 of those buildings located in Montgomery County. Responding to the data from Washington Gas, the Montgomery County Attorney’s Office wrote, “As the Commission considers this issue… in the aftermath of a fatal explosion, Montgomery County cannot underscore strongly enough the need to replace this archaic equipment immediately.’’

The County Attorney’s Office request does not align with Washington Gas’ timeline for its new MSR replacement program presented to the Public Service Commission. In it, the company estimates it will take five years to replace the MSR’s in multi-family dwellings across the state and 10 years to replace those in single-family homes.

The company has now put a $32 million price tag on its decade-long replacement program, considerably higher than the estimate it presented in 2002 and 2003.

The Apartment and Office Building Association of Maryland (AOBA) asked the PSC to require the $32 million cost be borne by the company and its shareholders and not ratepayers. OPC concurred and stated that Washington Gas must complete the remaining work using shareholder funds or be fined $25,000 a day until all MSR’s are replaced.

The Montgomery County Attorney’s Office voiced its support for the commission levying an appropriate penalty against Washington Gas for the failure of the equipment at Flower Branch. Officials asked the commission to “recognize that seven people, including two children lost their lives, and many others have had their lives irreparably altered.”

OPC added, “the Company’s inability to complete the replacement program on time has potentially contributed to the death of seven people.”

The PSC will hold a public hearing, scheduled for Dec. 17 at 6 p.m. at the Long Branch Library, just around the corner from the Flower Branch Apartments, to allow community members to voice their concerns regarding the safety of Washington Gas equipment and the pace of MSR replacement program. Spanish interpretation services will be provided.

After the hearing, the commission will review the testimony given in the public hearing, Washington Gas’ response to charges that the company failed to provide safe equipment or reasonable care to protect the public, and the comments from the commission’s technical staff, OPC, AOBA and the Montgomery County Attorney’s Office.

The comment period will remain open until Jan. 31, and then the commission will determine whether Washington Gas violated Maryland Code regulations and if the severity of the violation merits penalties and fines against the company.

More than three years after the explosion at the Flower Branch Apartments, the victims continue to seek justice.

Those involved in lawsuits recently reached a verbal agreement in principal on a settlement with Washington Gas and Kay Management and are continuing to work on finalizing the terms.

And soon, if they choose, victims will have the opportunity to have their voices heard by the commission, the regulatory agency with the power to oversee Washington Gas’ actions and levy penalties for failure to adequately protect their families and the public.

Vicki Warren is a freelance reporter and documentary producer in Silver Spring. She can be reached at [email protected]

All posts by Vicki Warren

A settlement has been reached with Washington Gas over the deadly 2016 explosion at the Flower Branch Apartments in Silver Spring. The terms and…

Washington Gas had both the funds and the direction to fix what caused a deadly apartment fire that killed seven people, according to a…

Something smells in a Prince George’s County town, and it is bad enough to wake some people from their sleep. The Town of Cheverly,…