More Maryland General Assembly candidates raised six-figure campaign war chests to win their seats in 2018 than a term earlier, according to a new report. 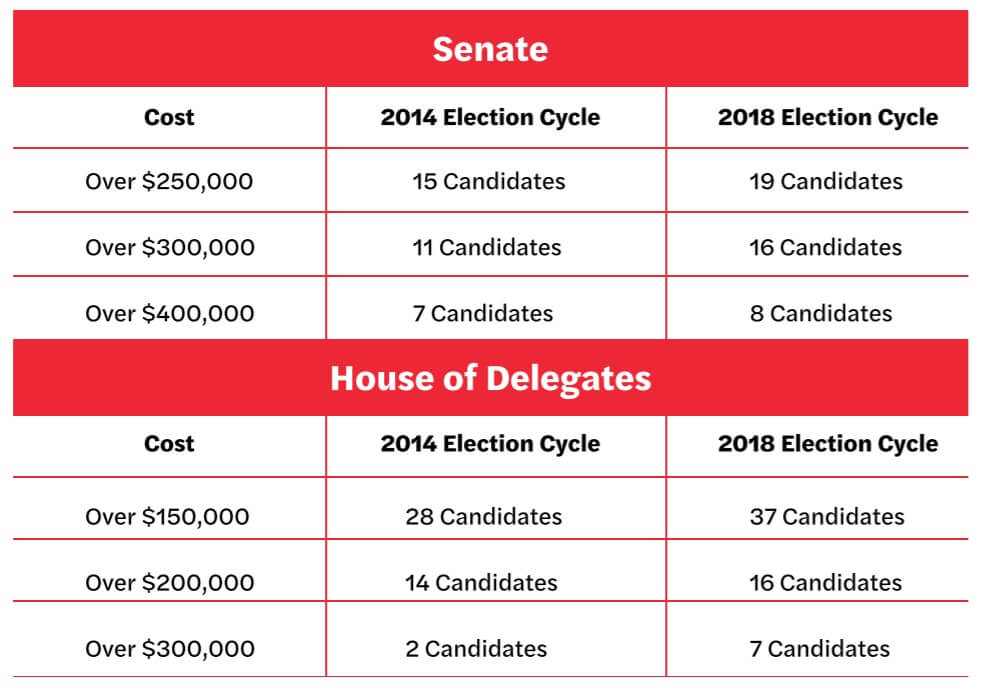 Graphic from Common Cause Maryland.

Twenty-one counties averaged more than $100,000 in fundraising for Senate seats and spending in 11 counties hit that average for House seats, according to the report.

Tierra Bradford, policy manager for Common Cause Maryland, wrote in the report:

“As a state, Maryland should be concerned about the rise in candidate fundraising totals. When the cost to run for office is high, candidates often need to rely on mega donors or corporate interests to be competitive.”

The report advocates for expanded public financing of more state elections to address the issue. Montgomery County was the first jurisdiction in Maryland to use a public financing program, which allowed for matching local government funds for donations from small donors. In the 2018 election cycle, six winning council candidates and the new county executive, Marc B. Elrich (D), participated in the program.

Programs in Howard County and Prince George’s County have been approved and the city of Baltimore is working through final details of a program there. In 2020, voters in Baltimore County will decide whether to start public financing programs for local seats there.

“We need reform that can help lower the cost of running competitive campaigns in Maryland elections,” Joanne Antoine, executive director of Common Cause Maryland said in a statement. “…We must seek out reforms like Public Financing Programs that will change the culture of campaign fundraising to focus on how many constituents’ candidates are able to reach, not on how much candidates were able to raise.”

The Common Cause report analyzed the total contributions to the campaign finance account of winning legislators, but does not necessarily reflect what candidates ultimately spent on their races. The winning candidates could have transferred contributions to other races or may have had their own campaigns boosted by independent spending. The goal of the report is to create a snapshot of what fundraising expectations legislative candidates face.

On average, candidates in Western Maryland raised the least, about $56,000 in the House and about $53,000 in the Senate. Fundraising averages for House seats in Central Maryland were driven up by the late speaker Michael E. Busch (D-Anne Arundel). The average in Southern Maryland and Prince George’s County were also driven higher for Senate races by Senate President Thomas V. Mike Miller Jr.’s prolific fundraising. His district covers parts of Calvert and Prince George’s counties as well as a sliver of Charles County.

The report details the top fundraisers for the 2018 election cycle.

Senators who raised the most:

Delegates who raised the most:

Woke has become a caricature of aspects of leftist (mostly social media) discourse used to smear those of us who are advocating more radical politics.