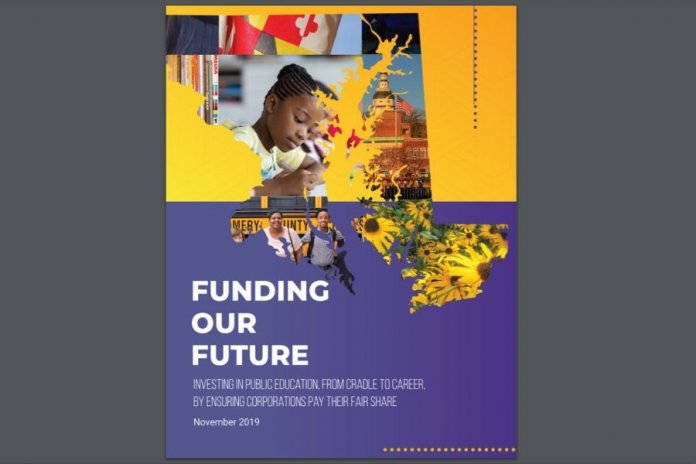 An influential labor union is pressing for changes to Maryland’s tax code that would result in higher tax rates for the wealthy and corporations ― and, in turn, fund the ambitious Kirwan Commission education reform plans.

SEIU Local 500, which represents Maryland workers at colleges, universities, public schools, and nonprofits, is releasing a report that outlines how changes to Maryland’s corporate and income tax structures could result in an additional $1.6 billion in annual state revenue.

“We will work tirelessly to ensure that Maryland raises the revenue needed to guarantee that all children receive the education they deserve,” SEIU Local 500 president Pia Morrison writes in the 35-page report called “Funding our Future.”

The paper proposes several changes including:

SEIU Local 500 is part of the “Maryland Fair Funding Coalition,” which includes progressive organizations, other unions and civic groups. The coalition will push for changes to the state’s tax structure in ways they say are more economically equitable to fund the recommendations of the Kirwan Commission for Innovation and Excellence in Education.

Current estimates for the education reforms proposed by the commission would require state funding to steadily increase over the next decade until an additional $2.77 billion in state aid would go to schools in 2030. County budgets would also increase during that time period, up to a cumulative $1.23 billion annually.

Advocates of the Fair Funding Coalition plan hope that a public focus on the Kirwan recommendations, and new leadership in the Maryland Senate and House of Delegates – where Democrats have already promised to pass and fund reforms next year – will bolster chances for tax changes in 2020.

However, several of the proposals have languished for years in the chambers of the General Assembly despite Democratic supermajorities, and Republican Gov. Lawrence J. Hogan Jr. has vowed not to back tax increases for the Kirwan proposals.

“Maryland can afford to make these investments if we reset the conversation and prioritize our children and our students once again,” the SEIU report argues. “For too long policymakers have chosen to allow large corporations and wealthy individuals to avoid contributing their share to our children’s future ― a choice that hits communities of color and struggling families hardest. The situation is untenable. It’s time for us to make sure the powerful few step up and do their part.”

Of the 150 largest corporate employers in the state, one-third paid no taxes in 2016, the most recent year for which information is available, according to information from the state comptroller’s office sent to Sen. Paul G. Pinsky (D-Prince George’s), a long-time advocate for corporate income tax reform.

Of the seven largest public corporations headquartered in Maryland based on revenue, three ― Marriott International, Under Armour and Discovery Communications ― paid no state income taxes in at least one of the past three years, according to the SEIU report (Discovery relocated to New York earlier this year).

Marriott, for example, reported $7 billion in pre-tax cumulative profits from 2016 to 2018, but reported no state taxes paid on financial disclosures, according to the SEIU report.

The report suggests that implementing a combined reporting corporate tax system could keep companies from using tax avoidance strategies. In combined reporting, corporations are required to report total profits including those of subsidiaries, and the state can apply taxes based on the company’s activities in the state.

Twenty-eight states and Washington, D.C., already use combined corporate reporting. In Maryland, the shift could generate an additional $92 million in state revenue each year, according to legislative analysts.

The majority of multi-state corporations operating in Maryland must already calculate combined reporting for other states, according to the SEIU report.

The report also suggests scaling back state subsidies and tax breaks for corporations, which were estimated at $124 million in 2018, including $56 million in direct assistance and $76 million in tax credits. Some of the tax credits ― including the Enterprise Zone Tax Credit, Biotechnology Investment Incentive Tax Credit, Businesses that Create New Jobs Tax Credit and the One Maryland Economic Development Tax Credit ― were found not to have met goals in reviews by the Department of Legislative Services.

The Maryland Center on Economic Policy has estimated that eliminating ineffective tax subsidies could add about $50 million in state revenue each year.

The SEIU report also suggests a number of changes to the state’s individual income tax laws. Among the proposed changes are:

Combined with other income tax reforms, the proposals could generate more than $1 billion in revenue annually.

Christopher Meyer, research analyst at Maryland Center on Economic Policy, has supported similar tax reforms in the past and continues to do so through the Fair Funding Coalition. He believes 2020 will be the year that some long-stalled reforms will see success.

“These are all reforms that are needed to make sure our tax laws are more equitable,” Meyer said in an interview Monday.

The full “Funding our Future” report from SEIU is online.