Only in Montgomery County could a Constitutional law scholar be given the rock star treatment.

Now that he’s in the thick of the impeachment fight on Capitol Hill, the star for that Constitutional scholar, U.S. Rep. Jamie B. Raskin (D-Md.), is shining even brighter.

“You may have noticed, I’ve been overexposed on television recently,” he joked.

This was no ordinary political speech.

Over the course of 90 minutes, it was part academic lecture, part history lesson, part examination of the Constitution, and part call to arms, laced with humor.

Church leaders were comfortable with the political nature of the conversation, said Abhi Janamanchi, Cedar Lane’s senior minister, because “democracy is an act of faith.”

Raskin, who serves on the Judiciary and Oversight and Reform committees, began by laying out his belief that even though the Constitution created three co-equal branches of government, “Congress is the first among equals” because it’s closest to the people.

He pointed out that Article I of the Constitution, which establishes the duties of Congress, has 10 sections and is 54 paragraphs long. It gives Congress the power to regulate national and international commerce, government spending, taxation and immigration, combat piracy, declare war, and more. Article II, on the powers of the executive branch, has just four short sections.

“If we were co-equal branches, why is it that the founders say that Congress can impeach the president, but the president can’t impeach the Congress?” Raskin mused to wild applause – one of several times he brought the crowd to its feet. He called the president “an employee of the people.” 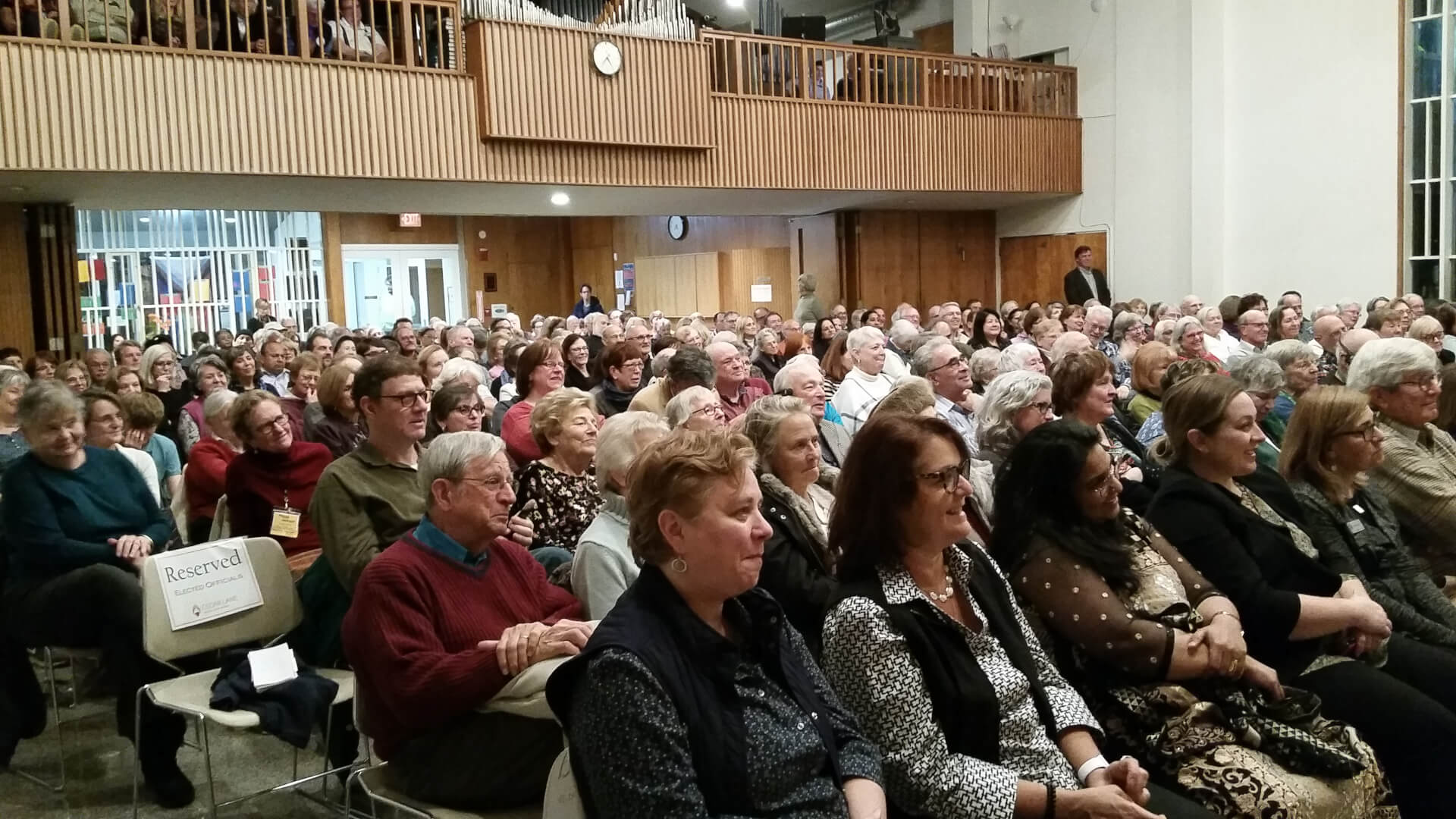 The congressman then talked about the Emoluments clauses of the Constitution – and the ways he believes Trump is violating them. “Up until our times, nobody came close to violating it,” he said.

“The kings and queens treated their governments like private treasuries,” Raskin said, but presidents are not supposed to. Trump is the exception, taking money at his hotel in Washington, D.C., from 27 governments, including Saudi Arabia, United Arab Emirates, Turkey, Egypt and the Philippines.

What the impeachment inquiry is probing, the congressman continued, is essentially an extension of Trump’s Emoluments violations – his use of federal officials to pressure the Ukrainian government to investigate former vice president Joe Biden, he’s turned the U.S. government and foreign policy apparatus “into an instrument of his own re-election campaign.”

The diplomats and agency officials who have been willing to testify against Trump and his advisers “will go down in American history as heroes,” Raskin said.

The congressman was withering in his criticism of his Republican colleagues, accusing them of “whining about” the impeachment process, and ridiculing their attempt to disrupt a behind-the-scenes session of the three House committees handling the Trump probe.

“It’s the first civil disobedience in American history waged in American history for high crimes and misdemeanors,” he said. “It was an odd intervention. The public saw through that. They were not exactly freedom riders or hunger strikers, with the pepperoni pizza they brought in.”

Raskin said he could not predict what GOP lawmakers would do next in the defense of Trump. He noted that they were enthusiastic about supporting impeachment for President Clinton’s “low crimes and misdemeanors.”

But Trump’s actions, Raskin said, were no low crimes: “What this president did was the most impeachable thing that an American president has ever done.

“I don’t want to sound too partisan,” he quickly added.

Raskin returned then to the Constitution, arguing that while the 17 amendments to the original document have all been designed to expand democracy, impeachment investigators are probing attacks on U.S. democracy.

“We have to keep the trajectory of democracy moving,” he said.

Raskin criticized current and former Trump administration who ignore congressional subpoenas to testify: “My friends, a subpoena from the Congress of the United States is not an optional thing. It’s not an invitation to a Christmas party.”

Asked by a member of the audience, “how long before sanity returns?” Raskin replied, “Generations to come will marvel in disbelief at what we’re living through right now.”

But Raskin said he believes sanity began to return on Jan. 21, 2017 – the day after Trump’s inauguration and the day massive women’s demonstrations broke out across the country.

“The sanity has been here,” he said. “The sanity is building every day. The sanity and the education are continuing. And then we’re going to take our country back.”