The event, held in a lavish ballroom at the Maryland Live! Casino in Anne Arundel County, raised an undisclosed sum for Change Maryland, the anti-tax hike organization that Hogan started eight years ago and that ultimately fueled his successful pursuit of the State House.

As men in tuxedos and women in gowns drove up to the casino’s valet parking area, a bus carrying teachers and public education advocates pulled up to the curb. Protesters quickly poured out, chanting and waving signs in a light rain.

They were immediately met by hotel security personnel and Anne Arundel County police officers, who ordered them off the casino’s grounds.

As they marched, they chanted “Fund our schools,” “Our children can’t wait,” and “$25,000 a table,” a reference to the cost of top-tier tickets to the black-tie gala. They handed out fliers that said, “As the richest state in the country, we can afford to fund the Kirwan recommendations.”

Change Maryland, Inc. and the Change Maryland Action Fund are hoping to raise $2 million to help the governor beat back an effort to enact education reforms that would make more money available for the state’s public school system.

Hogan and his aides have taken to referring to the Commission on Innovation and Excellence in Education as the Kirwan Tax Hike Commission. The panel, which has spent three years formulating its recommendations, is chaired by former University System of Maryland chancellor William E. “Brit” Kirwan.

“We know that this Kirwan Commission funding is so important for our students,” said Theresa Mitchell Dudley, head of the Prince George’s County teachers’ union. “We’re here to send a message to our governor that our kids can’t wait.”

While candidate committees for office have to register with the state’s Board of Elections and disclose their donors and expenditures, organizations like the Change Maryland Action Fund do not. 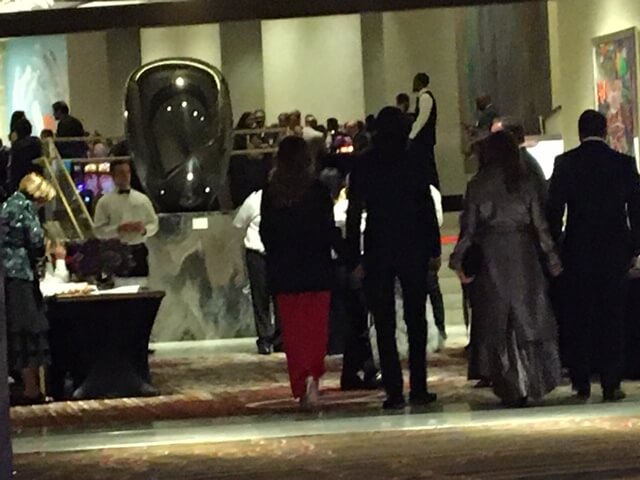 The advertisement for the “Governor’s Gala” encouraged supporters to dig deep. “There is no limit on the amount that you can donate to Change Maryland Action Fund,” their promotional material noted.

Corey Gaber, a middle school English teacher and leader in the teachers union, called the Kirwan recommendations “a unique opportunity… to finally fix the massive funding inequities, not just in Baltimore City Schools, but all of Maryland schools.”

“Instead of working with the Kirwan Commission to address this challenge, he’s holding a $25,000-a-table fundraiser to have a dark-money slush to fight the recommendations. It’s absurd and disrespectful,” Gaber added.

One member of the protest group, who declined to give her name, walked through the line of cars leading to the casino, attempting to share a flier with information about the Kirwan Commission’s work.

Hundreds of people attended the gala, which was held just off the casino floor. The event was closed to the press.

Before the governor spoke, attendees were shown a presidential campaign-style video highlighting Hogan’s crusade to cut taxes, his upstart political career, his accomplishments and his battle with cancer.

His remarks made no reference to Kirwan or the protesters outside the venue.

“We have come such a long way over the past five years, but it is what happens over these next three years that will quite literally determine what kind of state our children and our grandchildren will grow up in,” Hogan said, according to prepared remarks distributed by his office.

“Are we going to let the special interests take Maryland backwards? Back to the uncontrolled spending, the massive tax hikes, and the multi-billion dollar deficits. … Or do you want us to keep adding businesses and jobs, keep growing our economy, and continue having one of the best economic turnarounds in America?”

“The people of Maryland have already decided where they stand on these questions,” Hogan concluded. “And they voted overwhelmingly for us to keep making progress, to keep moving Maryland forward, and to keep changing Maryland for the better.”