Many Maryland students do not want to accept the state’s offer of tuition-free community college if it means they are required to live in the state after graduation or risk having their award turn into a loan, education officials told state lawmakers Tuesday.

“We could have served another 200-300 more [students] through the Maryland Promise program had that service component not been there and particularly the promissory note, having the scholarship [potentially] turn into a loan,” Prince George’s Community College President Charlene M. Dukes told members of the Senate Education, Health and Environmental Affairs Committee.

State lawmakers last year approved $15 million for the inaugural year of the Promise Scholarship Program, but Maryland Higher Education Commission leaders said they have awarded only $4.3 million for the last-dollar scholarships. Only 1,276 of the 5,248 applicants were deemed eligible and awarded money in August, a number that has since dropped to 1,082 awardees.

“We have returned $11 million that was put aside for this community college scholarship because of inadequate outreach,” said Sen. Paul G. Pinsky (D-Prince George’s), the committee’s chairman. With better outreach, Pinsky estimated the scholarships could have served two to three times as many students.

To be eligible, students must have graduated from a Maryland high school or earned their GED within the past two years; have a GPA of 2.3 or higher; register for 12 or more credits at one of the state’s 16 community colleges; and document financial need. Because the Promise Scholarships are a last-dollar program, all other financial aid options must be applied first. Awards are capped at $5,000

Of the more than $4.3 million awarded so far, the largest amounts went to students at the Community College of Baltimore County, $591,660; the College of Southern Maryland, $565,558 for 145 students; and Montgomery College, $539,439, said Donna Thomas, director of MHEC’s Office of Student Financial Assistance. The lowest amount went to Baltimore City Community College, $9,196.

“It seems students in Baltimore are not tied in to this opportunity,” said Sen. Arthur Ellis (D-Charles). “We need to understand why students in these jurisdictions are not taking advantage of these opportunities.”

Sen. Ronald N. Young (D-Frederick) added, “I’d love to make community college free, period, but we know we don’t have that kind of money. So the purpose was to try to narrow it down to those that needed it the most.”

Education officials and lawmakers agreed the roll-out was bumpy. With the program set to begin in September 2019, state lawmakers approved changes to the law in April that became effective after Gov. Lawrence J. Hogan Jr. (R) allowed the bill to take effect without his signature in May.

That left a tight deadline for state officials to promulgate regulations, develop databases, and publicize the program to students, Thomas said. Student documentation was due June 17, and scholarships were awarded Aug. 12.

Pinsky said the legislative changes were made at the request of MHEC officials.

Students also were confused because some jurisdictions, such as Prince George’s and Garrett counties, have their own programs also called Promise Scholarships, Thomas said.

Counties that have their own promise awards have higher participation rates than the state program, in part because of the state’s promissory note, said James D. Fielder Jr., secretary of Higher Education.

The state program includes a service obligation requirement under which students agree to live in Maryland and work full-time for at least one year for each year the scholarship was awarded. Awardees are required to fulfill this obligation within one year of receiving their degrees or certificates or completing their apprenticeships, but can defer their service requirement if they transfer to a four-year institution; are temporarily disabled; are unable to work due because they must care for a disabled spouse or child; or are assigned military duty outside of the state, according to the MHEC website.

“We’ve actually had parents say they do not want their children to take that service requirement because they do not plan to live in the state once they earn their credential,” Thomas said.

Dukes said studies show that 88 percent of Marylanders who attend community college in Maryland stay in the state, a figure that has remained constant for about 20 years, as she urged lawmakers to eliminate the service obligation and the possibility the grant could turn into a loan.

MHEC continues to award scholarships as students are vetted, Thomas said, and another 900 students may be eligible this year. Awards have not yet been made for students in non-credit, certification, and apprenticeship programs.

Community college leaders also urged the legislature to require all high school students to file the FAFSA, the Free Application for Federal Student Aid, unless students or their parents opt out. Louisiana, Texas, and Illinois recently enacted such a requirement as a way to raise college enrollment and better educate students about financial aid.

Further changes could address that 35 percent of Maryland community college students are over 25 years old and the majority attend part-time, making them ineligible for the Promise Scholarship, Fielder said.

Young said he does not want to discuss changing eligibility yet, but wants to “make it easier to make sure everybody that is eligible” actually gets an award.

Citing his experience as an organizer, Pinsky said MHEC officials should meet with counselors from every high school in the state to raise awareness about the program.

“Have you done that for 2019-2020, so guidance counselors will know when they counsel people in January, February, March, April, and May, to tell all those students who cannot afford or don’t think they can move on to community college that it could be free?” Pinsky asked Fielder and Thomas. “I’m at a loss.”

He added: “Community college is the important foundation for education in our state that’s currently under-utilized and we want to have it bursting at the seams.”

Lisa Nevans Locke is a freelance writer who has covered education, local and federal government, and other issues in the region for more than 25 years. She has written for The Washington Times, Bethesda Magazine, Scholastic.com, The74million.org and the now-extinct Montgomery Journal, and she teaches writing at Montgomery College.

She can be reached at [email protected] 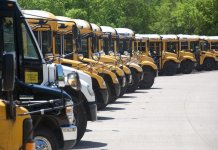