Baltimore City’s Bill Ferguson entered the Senate as a 27-year-old giant killer in 2011 – and his trajectory to the top job in the chamber has been every bit as extraordinary.

Ferguson, who had moved to Baltimore to work for Teach for America, knocked off a seven-term incumbent, Sen. George W. Della Jr., whose father had been a Senate president, in the 2010 Democratic primary – an early part of a wave of young lawmakers who are reordering city politics.

On Thursday, he snared another improbable victory. After a quiet campaign to gather votes for the Senate president position, Ferguson ended up the only lawmaker to declare himself a candidate for the top job at a 50-minute closed-door Senate Democratic Caucus meeting. The caucus, in a conference room named for departing Senate President Thomas V. Mike Miller Jr. (D-Calvert), then unanimously voted to recommend Ferguson to the full Senate as the chamber’s next president in January.

By early afternoon, the longest-serving senate president in America was passing the torch to a 36-year-old progressive senator from Baltimore City who wasn’t yet born when Miller was first sworn into the chamber in 1975.

“I have been humbled and honored to learn from his example over the last nine years,” Ferguson said at a packed lunch-time news conference. “And from all of my colleagues – in the Democratic caucus, in the Republican caucus – there is no one that can replace Mike Miller.”

Colleagues and other State House insiders said Ferguson was very quiet about his ambitions. He benefited from entering the game late and showed the subtleties and deftness of an expert poker player.

On Wednesday evening, an advocate sat next to Ferguson at a reception in Baltimore and said the lawmaker was cool as a cucumber, exchanging pleasantries and talking about the World Series without uttering a word about the Senate drama or his own ambitions.

“They could write a book about it,” one colleague said about Ferguson’s campaign.

This same colleague said that Ferguson benefited from Budget and Taxation Chairwoman Nancy King’s reticence about speaking on the Senate floor. He became the go-to person for fellow lawmakers on budget matters, both behind the scenes and on the floor.

Asked how his relationship with the governor might evolve, Ferguson responded: “I look forward to working with all partners in government. I’ve learned well from Senate President Mike Miller that everybody has a voice to the conversation.”

A Montgomery County native, Ferguson graduated from the Johns Hopkins University with a degree in education in 2007 and taught in Baltimore City Public Schools through Teach for America for two years (his wife was also in Teach for America). He graduated from the University of Maryland School of Law in 2010 and currently works as director of reform initiatives at the Johns Hopkins School of Education. He’s been a leading voice for Baltimore since he entered the Senate.

This year, Ferguson led an end-of-session charge to try to save a funding deal to refurbish Pimlico Race Course. A year earlier, he had sponsored a bill that establishes a commission to investigate corruption within the Baltimore Police Department.

Ferguson was said to have considered a run for mayor of Baltimore earlier this year but lacked citywide name recognition in a race that’s growing crowded.

His forthcoming ascension to Senate president was cheered by city leaders on Thursday.

“He loves our city and he loves our state. I know he’ll honor our city as president,” Baltimore City Council President Brandon M. Scott, a Democrat who’s also running for mayor in 2020, said Thursday.

Mayor Bernard C. “Jack” Young (D), who is seeking a full term after moving into the job in May, said Ferguson has been a “fervent advocate” for the city for the last eight years.

“I wish Senator Ferguson all the best as he transitions into his new leadership position,” Young said. “I stand ready to partner with him to move Baltimore City, and the State of Maryland forward.”

In the Senate chamber, Ferguson has emerged as a leading voice on education issues. He’s a member of the Kirwan Commission for Innovation and Excellence in Education, which is deciding how to fund public school reform in the state, and a workgroup to modernize school construction funding.

He committed to passing the Kirwan Commission reform and funding recommendations next legislative session.

“We have tough conversations ahead, and with all the members of the Senate, we will reach a compromise to make sure that all Marylanders have access to world-class schools,” Ferguson said.

It’s a priority he shares with newly elected House Speaker Adrienne A. Jones (D-Baltimore County). Come January, they will both lead chambers on the cusp of institutional change.

“This will be an exciting year for both Senator Ferguson and I to lead our chambers to implement the Blueprint for Maryland’s Future and invest another $2.2 billion in school construction. I congratulate Bill as we begin this new journey together on behalf of all Marylanders,” Jones said in a statement.

As for other plans, Ferguson was evasive – and deferential to Miller – on Thursday.

“It’s going to be a great year ahead. But today is about making sure that we reflect upon the incredible lessons of Mike Miller’s tenure as the Senate president for the last 33 years.”

When a reporter at the news conference asked Ferguson how many decades he intends to serve as Senate president, the room, including Miller, erupted with laughter. 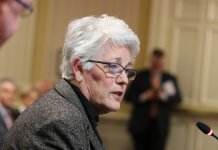