Looking to take charge of a Bay Bridge work project that has created epic backups, Gov. Lawrence J. Hogan Jr. (R) has ordered the Maryland Department of Transportation to bring new urgency to the enterprise.

“I have directed them to re-double their efforts and to work with local officials and to address their concerns and the concerns of residents,” Hogan said on Wednesday.

The resurfacing of the right lane of the westbound span of the bridge has led to lengthy backups that have caused hardship for both local and long-distance motorists. Local officials, including many Eastern Shore Republicans, have blasted the state’s handing of the work, criticism that Hogan and top aides view to be unfair.

Under the governor’s order:

— contractors will work 24 hours a day on the project;

— engineers will search for time-saving changes, such as faster-drying concrete;

— Bay Bridge toll booths will be removed and cashless tolling will begin “as soon as possible”;

— The State Highway Administration and the Maryland State Police will assist the Maryland Transportation Authority, which operates the bridge, and local governments to help move traffic.

In comments at the start of the bimonthly Board of Public Works meeting on Wednesday, Hogan said he has expressed his frustration with his transportation team and has pressed them for answers.

“I want people to know that I, too, am frustrated and angry,” Hogan said. “In fact, I’m furious about it. And let’s just say that — as some people here can attest — I’ve been very vocal with some of the folks throughout state government about this issue.”

In an interview, James Moran, the president of the Queen Anne’s County Commission, said he appreciates Hogan’s effort to speed the project and ease traffic on the shore.

He repeated his call to have multiple work crews working on the bridge simultaneously.

“It’s 4.5 miles. You don’t need to start at one end and work your way to the other end,” said Moran, a Republican. “I understand there’s cost and logistics to it, but why would you want to go two years when you can go six months?”

Moran also pressed to have the state limit the ability of bridge-bound motorists to get off U.S. Route 50 and use county roads to bypass the long lines of traffic.

“If you’re going to [have two-way traffic on the span], you have to have a plan for the traffic going westbound, to keep them off those side-streets, because we’re on an island. There is nowhere else to go.”

If county residents had special decals allowing them access to MD Route 18 and other key arteries, Moran said, “through” traffic could be prevented from clogging those roads. He conceded that such restrictions could face legal challenge. 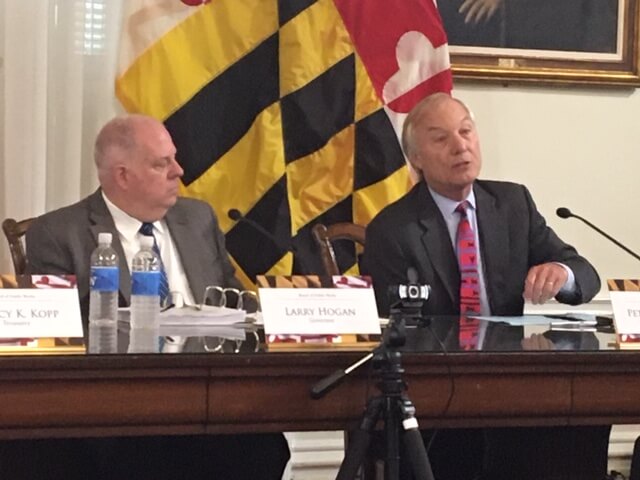 Although Hogan called the work “critical” to solving “tremendous safety problems” on the Bay Bridge, Comptroller Peter V.R. Franchot (D) said again that the resurfacing project should be put off until the fall of 2020, after the MdTA has had a chance to “regroup.”

“What we have right now is unacceptable,” said Franchot, a possible candidate for governor in 2022. “Over the last three weeks, Governor, I’ve heard from thousands of people via Facebook, Twitter, email and calls to my office who’ve shared their experiences about being stuck in this nightmare.”

While he voiced support for the steps Hogan outlined, Franchot said, “We’re playing catch-up. We should have done all of this beforehand.”

He said the two-year, $27 million project should have come to the Board of Public Works for approval.

As the comptroller read his statement, he and Hogan, longtime allies on the board, avoided eye contact. Franchot spoke in the general direction of Transportation Secretary Pete K. Rahn, who listened with a bemused smile.

Hogan defended the state’s decision to keep the project moving forward. “The engineers say the deck surface on the westbound lane is severely deteriorated. … If neglected any longer, the crisis could go from terrible and unbearable to catastrophic and life-threatening.”

The governor said delaying the repairs would cause further deterioration, leading to a five-year rehab that would cost eight times as much, a prospect he rejected as “even more unacceptable than the current situation.”

“We were confident the Governor was hearing us, he realizes and expects us to be vocal in the representation of our communities,” Hershey said in an email to Maryland Matters. “We are appreciative that he didn’t just respond with reactionary rhetoric, but conversely he assessed the situation and is taking action with thoughtful and meaningful solutions.”