The Baltimore mayoral election is the marquee race of the 2020 primary season in Maryland. But 60 miles to the north, the Republican primary for Cecil County executive bears some serious attention.

On Thursday night, Danielle Hornberger announced her bid for county executive, raising the potential for a contentious race as she and Ewing McDowell, who works for the Maryland Department of Commerce, challenge Republican incumbent Alan McCarthy in his bid for reelection.

Hornberger is a community liaison for Congressman Andrew P. Harris (R) and is married to state Del. Kevin B. Hornberger (R), who represents District 35A in Cecil County. McDowell is a farmer in Rising Sun in addition to his work for the Hogan administration.

McCarthy did not respond to interview requests from Maryland Matters but sat for an interview with Cecil TV in September, where he said he welcomes his challengers.

“We have lots of issues and problems to be addressed and concerns to be dealt with in Cecil County and if they have better ideas than I, than I would certainly like to hear them,” McCarthy said. “So I welcome any newcomers.”

McCarthy was elected county executive in 2016 after years of serving as a councilman and the vice president of the County Council. The retired veterinarian was charged with a DUI in 2017, while he was county executive, which could become a factor in the GOP primary. 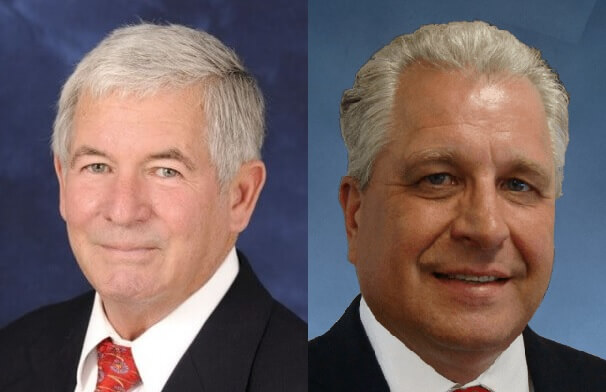 McCarthy pleaded guilty to the lesser charge of driving while impaired and was sentenced to probation before judgment. The offense could have carried up to 60 days of jail time.

Danielle Hornberger is extremely critical of the fact that property and income taxes increased under McCarthy’s administration. While this is her first run for public office, she has been representing Harris in the community for the last year and handles constituent casework.

“Republicans don’t raise taxes,” Hornberger said, “Cecil County is mainly Republican, and we are tired of being told one thing and then our taxes are raised.”

She also cites her concerns about how the opioid crisis has impacted Cecil County, where the opioid-related death rate ranks in the top five in the state.

“People are worried about their families. We can talk about all these broader issues, but it boils down to ‘how is this affecting me and my kids?’” Hornberger said.

Her first goal if elected would be to roll back the tax increases from the McCarthy administration. She said she also wants to defend residents’ second amendment rights and preserve the rural landscape of Cecil County.

Hornberger said “there’s a way to preserve our rural character by helping existing small businesses expand and bring in high tech jobs for more small businesses, while still maintaining who Cecil is.”

McDowell boasts a lengthy resume of government work. He was the president of the Cecil County Farm Bureau for three years, served as former Gov. Robert L. Ehrlich Jr.’s coordinator for Cecil County, and was formerly the deputy secretary of the Department of Planning in the Hogan administration.

McDowell ran for the House of Delegates in 2006 but was defeated by David Rudolph, a longtime Democratic incumbent who was eventually ousted by Kevin Hornberger in 2014.

McDowell said he is running on a platform of limited government, reduced regulations and fees and working to reverse “the spending binge Cecil County taxpayers have put up with for many years.”

He calls himself the “common sense alternative” in the election, and said he is qualified for office based on his extensive leadership experience, small and international business success, and years of state government employment.

“I will focus on the issues that Cecil County residents that I have talked to are always interested in – using their tax dollars in a responsible manner.”

Whether this becomes a high-dollar campaign remains to be seen. McCarthy reported less than $10,000 on hand as of mid-January. But Harris is often generous when it comes to dispensing money or encouraging contributions to his favored candidates, and McDowell’s Hogan administration contacts could benefit him.

The deadline to file for candidacy in Maryland is Friday, January 24 by 9 p.m. So far there are no Democrats running.