Open houses began last week to gather input from Marylanders on three possible locations suitable for a second Chesapeake Bay crossing to be built, along with the idea supported by Gov. Lawrence J. Hogan Jr. (R) to add a third span to the existing Bay Bridge. The sites have kicked off more debate over how to alleviate traffic backlogs when traveling from Maryland and the Washington, D.C., metro area to the Eastern Shore. 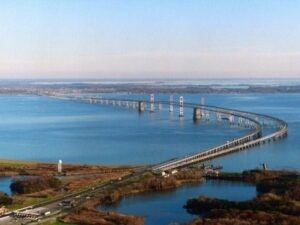 A list of 14 possible sites for a second Maryland bridge across Chesapeake Bay has been narrowed to three by the state. Maryland Transportation Authority photo

The corridor where the existing Bay Bridge sits — between Annapolis and Queenstown — would relieve the most traffic congestion year-round, the Maryland Transportation Authority said. That route would best reduce backups at the existing Bay Bridge, provide the greatest reduction in the duration of unacceptable congestion levels, and is more compatible with existing land-use patterns, according to the study data.

At the open houses, MDTA staff will go over the environmental review process for the Bay Crossing Tier 1 Study, the overall study schedule, public comments received to date, and the alternatives development, screening process and results. There will not be a formal presentation. Staff will be on hand to answer questions.

The Oct. 9 open house replaces a Sept. 25 event at Queen Anne’s County High School that was rescheduled at the request of local officials, according to a news release. Another open house in Anne Arundel County is being planned.

To see the story by Deb Belt as it originally appeared on Patch.com, click here.

I am pleased to announce the Draft Environmental Impact Statement for the Chesapeake Bay Crossing Study: Tier 1 National Environmental Policy Act is available…

A study on adding a third span to the existing Chesapeake Bay Bridge to ease traffic has stalled because of COVID-19, but there are…

One year after a Chesapeake Bay Bridge construction project caused friction between Eastern Shore leaders and the state, a new controversy has flared. The…