Deep in the belly of the Julia Rogers building at Goucher College in Towson, three dozen college students cradling a smorgasbord of takeout dinners filed into the Sarah T. Hughes Field Politics Center two Friday nights ago, preparing for a night of endless ear ringing.

“This will be the best one-way conversation you’ve ever had about politics,” political science professor Mileah Kromer gushed, pumping up the student callers on the first night of the Fall 2019 Goucher Poll.

The students had already attended a 90-minute training, but they went through a few last-minute pointers – name pronunciations, one last run-through of the questions, smile while talking and the reminder to always stay on script. “Be happy robots,” Kromer quips.

By the following Wednesday, the students had reached and conducted full interviews with 763 Maryland adults.

The poll results coming out this week – on state issues, national concerns and the presidential race – mark the 16th poll released by Goucher College since Kromer joined the college in 2012 to start up the polling operation.

Kromer, who’d been working as assistant director of the Elon University Poll in North Carolina and as a research associate at Louisiana State University’s Public Policy Research Lab before that, wanted to bring to Maryland the kind of unbiased public polling her former campus homes were known for.

Seven years in, Goucher Poll results have been discussed in legislative debates about fracking, a Styrofoam ban, the post-Labor Day school start, the minimum wage and nonpartisan congressional redistricting. 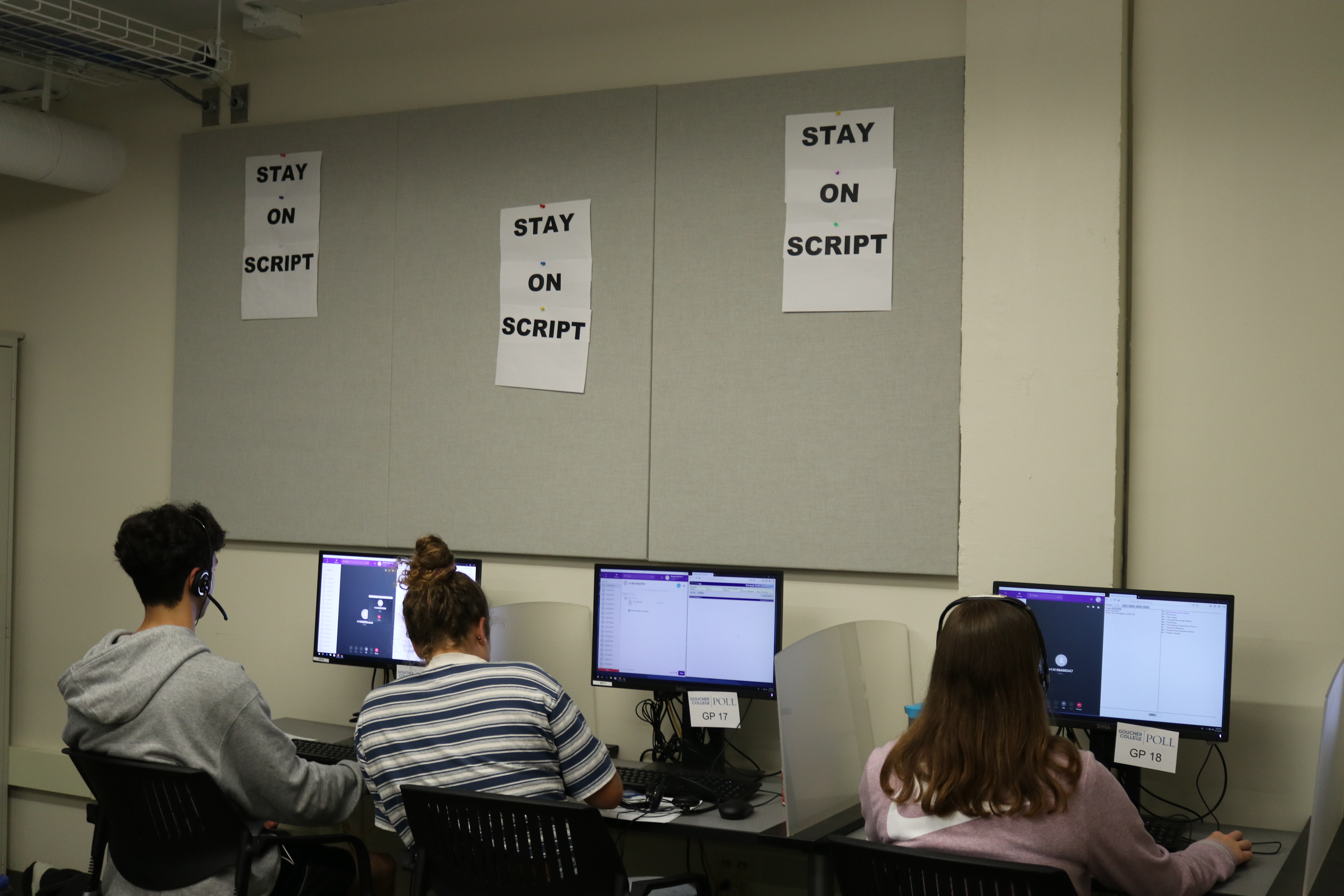 Signs in the call center remind students conducting the Goucher Poll to stay on script. Photo by Danielle E. Gaines.

Kromer has an active following on Twitter, including ribbing exchanges with lawmakers about her pet peeves and vice versa. She publicly lauds political candidates who come to her door asking for a vote and implores others for a visit.

Kromer also regularly faces criticism from lawmakers or advocates who’d wished for more favorable polling results: “They love the numbers that agree with them – and they hate everything else.”

And from Marylanders desperate to take a pollster’s call: “The fervor for getting selected in – I wish that transferred to response rates,” Kromer said, noting that those who clamor for a call are also those who are interested enough to be following a small college’s poll director on Twitter.

Despite the increased attention in Maryland to the Goucher Poll, Kromer said she’s not looking to become the next Marist or Quinnipiac. These are polls run by small universities that once stuck to state and local campaigns and issues but have since provided regular surveys on national topics and presidential campaigns – and have made their institutions household names, at least among political junkies.

Labor is the most expensive part of the poll; more than 30 students are paid at least minimum wage for eight four-hour shifts in the polling center.

“One of the best things about the Goucher Poll is that we don’t take outside funding, but it’s also one of our most limiting things,” Kromer said. She hopes the polls can be conducted more frequently in the future. 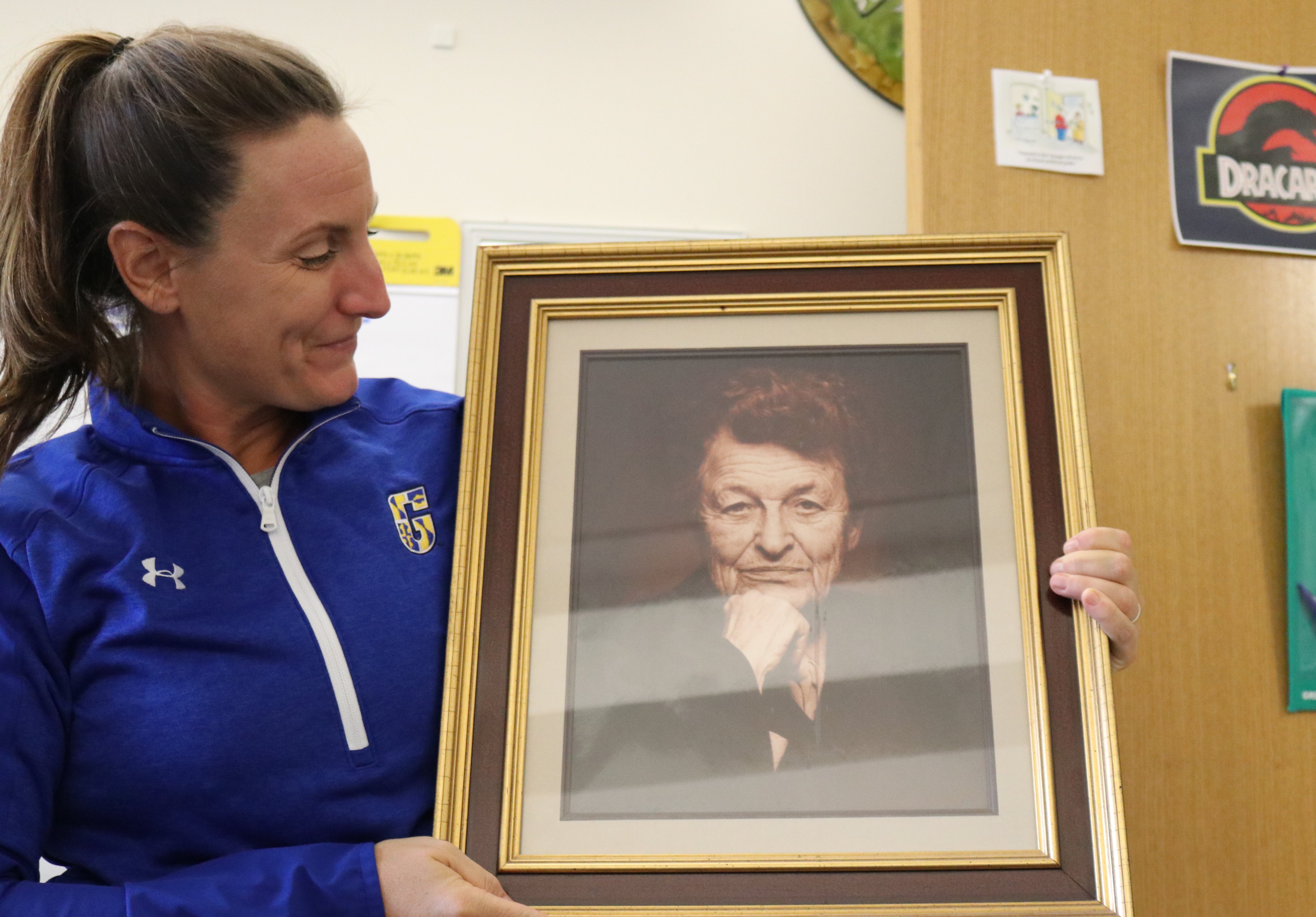 Goucher Poll Director Mileah Kromer holds a photo of Sarah T. Hughes, a Goucher alumna who was the federal judge to swear in Lyndon B. Johnson as president on Air Force One after the assassination of John F. Kennedy. The college’s polling operation is named for and funded by an endowment from Hughes. Photo by Danielle E. Gaines.

The polling operation is named for and funded by an endowment from Sarah T. Hughes, a Goucher alumna and the federal judge who swore in Lyndon B. Johnson as president on Air Force One after the assassination of John F. Kennedy on Nov. 22, 1963.

This fall more than 130 students were involved in the poll, about 10 percent of the college’s undergrad enrollment.

Throughout the students’ shifts, Kromer checked to make sure the residents who responded to the poll roughly matched the demographics of the state.

This fall, students in her Research Methods in Political Science course, wrote one of the poll questions: “Do you agree or disagree that individual lifestyle choices – things like recycling or reducing household energy use – make a difference in the overall health of the environment?”

The class workshopped the question as a group – taking out an earlier reference to “single-use plastic,” a phrase they agreed might not resonate with as many people as “recycling.”

Ninety-two percent of Marylanders agreed that personal choices can help the environment.

In more recent years, Kromer has started tossing in a “quirky question.”

In April 2018, the poll found that half of state residents aren’t fans of Major League Baseball. Among those who were, 30 percent said they cheer for the Baltimore Orioles, compared to 13 percent for the Washington Nationals.

In February, the poll found – no surprise here – that 83 percent of Marylanders have a favorable opinion of Old Bay seasoning. It’s one of the top hits when Googling the Goucher Poll.

This fall, the poll found that Marylanders prefer autumn to any other season. Forty-four percent of Maryland residents said that fall is their favorite season. Twenty-one percent prefer either summer or spring, while a chilly 10 percent favored winter.

“Here’s something I learned about Maryland. You go nuts for a poll about seasoning but are indifferent about a poll on seasons. Our Old Bay numbers got so much interest/attention—and no one really cared that MDers prefer fall,” Kromer tweeted. “I’ll pick a better ‘fun’ question next time!”

And while the chief pollster is careful never to express her own political opinions, she doesn’t mind revealing something about herself on some of the quirkier questions. For the record, she prefers summer.

“Seems like a good time to remind everyone that holding the most popular opinion doesn’t make it the correct opinion. Forever summer,” Kromer tweeted.

Opinion: Who says we can’t say Merry Christmas? Nobody, thats who. And I ought to know

To those who continue to spread the falsehood that we can’t say ‘Merry Christmas,’ please, knock it off.

Judge Steven Platt: Now we really find out who won and who lost

‘Every danger is an opportunity,’ John F. Kennedy told his brother Bobby.