Rather than wait for construction of the Purple Line to be completed — a year later than expected — Maryland officials say the light rail line will open in phases, beginning in Prince George’s County.

Ongoing construction delays, compounded by initial legal delays before the work began on the 16-mile line between Bethesda in Montgomery County and New Carrollton in Prince George’s County, have moved projections for the Purple Line’s completion from March 2022 to April 2023.

However, the Maryland Transit Administration and the private companies building the Purple Line said they would prefer to have riders on completed portions, instead of waiting for the entire project to be completed.

“We are determined to have operations by the end of 2022,” Charles Lattuca, head of project delivery for the MTA, told the Montgomery County Council’s transportation and environment committee recently. “It’ll be a portion, but we don’t have the ability to tell you exactly what portion yet.” 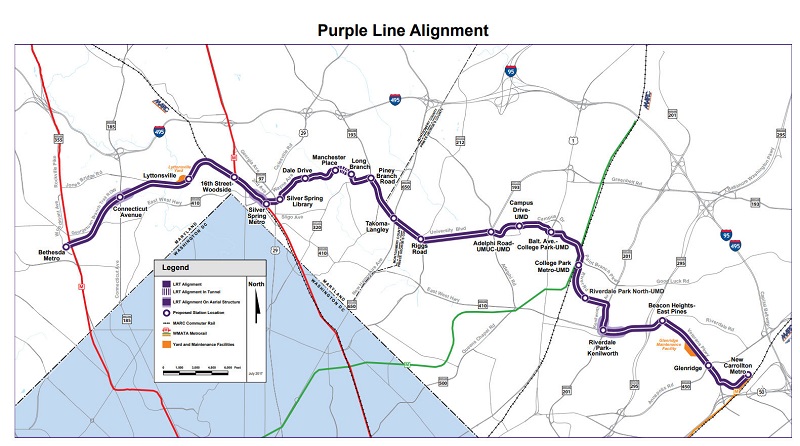 Lattuca and Peter van der Waart, chief executive of the Purple Line Transit Partners — the private companies building the light rail line — said they expect to know by the end of the year which stations will open initially.

“We need to check where we can turn around the trains,” van der Waart said. “We need to find a logical location where that can happen.”

The first stations will open in Prince George’s County, because the line’s rail yard, operations and maintenance facilities are in Glenridge, one stop before the New Carrollton Metro end of the line.

Members of the Montgomery County Council expressed disappointment the line would not immediately open in Bethesda and Silver Spring, where Purple Line riders will be able to transfer to Metro.

Lattuca said Purple Line progress has been slowed in urban areas, where construction has to be done around preexisting rail lines and infrastructure.

“It’s been very complicated to work with CSX,” Lattuca said. “They don’t provide many opportunities — we have six-hour windows to lift some heavy structures over the tracks, and get them in place, before they have to start running trains again.”

Light-rail trains, which are being built in New York, are expected to arrive for testing in late 2021.

Baltimore needs more than 570,000 new trees to reach “tree equity,” or the number of trees required for every neighborhood to enjoy the environmental…

After losing its prime subcontractor in a dispute over cost-overruns, the consortium building the Purple Line is one step closer to finding a replacement….