Hundreds of protesters representing the two sides of the polarizing immigration issue stood face-to-face in Rockville Friday with only metal barriers and a police-lined street separating them.

The dual protests staged outside the Montgomery County Council office building were prompted by an ICE-related executive order signed by County Executive Marc Elrich (D) in July that preceded a recent string of sexual assaults allegedly committed by undocumented residents.

Anti-immigration demonstrators said they were pushing back against Elrich’s written directive limiting federal immigration agents’ contacts with undocumented residents accused of a crime until they’ve gone through the county’s judicial process.

Protesters supporting immigrants’ rights argue that all residents in the county should be treated equally.

Under Elrich’s directive, Department of Corrections personnel are only to contact ICE officials when they learn that an incarcerated immigrant will be released from jail – and only if the suspect was charged with a “serious” crime, such as rape or murder.

Elrich is working on a redefined list of “serious” offenses, which he hopes to share soon, a county spokesman said.

ICE officials are also prohibited from entering non-public spaces within a government facility, constraining their efforts to detain an individual.

Elrich’s philosophy – and policy – is every person in the county should be treated equitably, regardless of their immigration status.

Some protesters say the county executive’s directive has turned Montgomery into a sanctuary county.

“The rights of citizens has to trump the rights of illegal aliens,” Help Save Maryland Director Brad Botwin said to a cheering crowd. “Elected officials are on notice.” 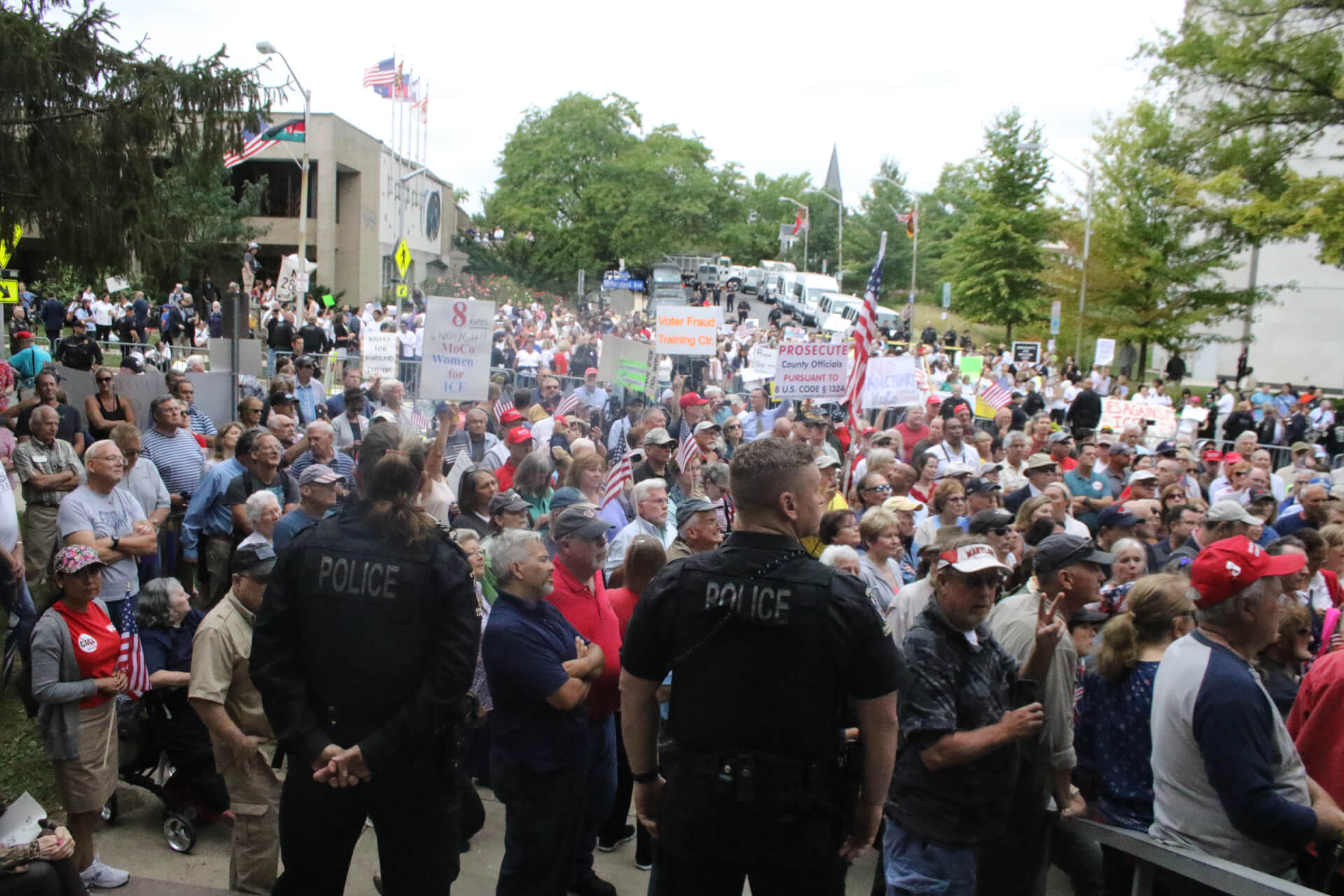 A 54-year-old Rockville native, who didn’t want to be identified, asked when county officials plan to draw the line.

“The issue is, they’re releasing criminals on the street,” the woman said. “They already have one strike against them, they’re here illegally. Then they commit a crime, that’s two – only to be released to the public? When do you draw the line?”

But Elrich pushes back on the term.

He says because the county cooperates with ICE on some level, it cannot be deemed a sanctuary county.

“There is no law, no rule or definition of a sanctuary city [or county],” Elrich said. “But to some extent it’s about cooperation.”

Elrich said the executive order he put in place matches the unwritten policies practiced by the county before he and the new County Council came into office last December.

As protesters opposing the county’s policy chanted, “USA, USA,” the demonstrators on the other side of the street countered with, “We are the USA.”

Across the street, members of the County Council and leaders of CASA, an immigrants’ rights group, addressed the crowd.

“All means all,” Glass yelled. “I want every resident to know you are welcome.”

Supporters listening to him speak yelled, “Tear down the wall.”

The theme was consistent. While several protesters said they were unfamiliar with the technicalities of Elrich’s policy, all said they believe the county’s residents should be treated the same.

When asked if they were OK with an undocumented immigrant charged with rape receiving bail and being released from jail, Bethesda resident William Zellmer, a 74-year-old Democrat, said yes.

County Councilman Tom Hucker (D) said there is no correlation between immigration status and the propensity to commit a crime.

An 82-year-old resident from Leisure World said she thinks the county should handle resident criminals.

“I don’t think ICE should be involved with people here in Montgomery County,” Sandra Robinson said.

As the protests were ending, Elrich could be seen across the street from the pro-ICE crowd. One of the protestors yelled, “You’re our county executive, too.”

But Elrich wouldn’t cross the street.

“They’re not reasonable,” Elrich said of the crowd. “I get hate mail. There’s a lot of ugliness. They don’t discuss issues. They don’t get their facts right. We are not a sanctuary county. We’re not.”

Glynis Kazanjian is a freelance writer.