Gov. Lawrence J. Hogan Jr. used a Purple Line milestone, the laying of the first mile of track Thursday, to cast Maryland as a national model for large-scale infrastructure projects.

The newly-elected chairman of the National Governors Association, Hogan (R) is hoping to lead a states-driven push to “build, repair and modernize” the nation’s crumbling infrastructure.

“In Maryland, we’re proud to be setting an example for the rest of the nation, and the Purple Line is at the very heart of our state’s infrastructure success story,” Hogan said.

Hogan made his remarks at a news conference near the first mile of track, near Ellin Drive in Lanham, not far from the U.S. 50-MD 410 interchange. The audience was made up mostly of hardhat-wearing workers who applauded the governor’s comments.

When finished, the 16-mile light-rail line will connect New Carrollton and Bethesda, with 21 stations in Montgomery and Prince George’s counties, including multiple stops at the University of Maryland in College Park.

“The Purple Line will integrate seamlessly with Metro, MARC trains [and] AMTRAK to provide more transit options across the region,” Hogan said. 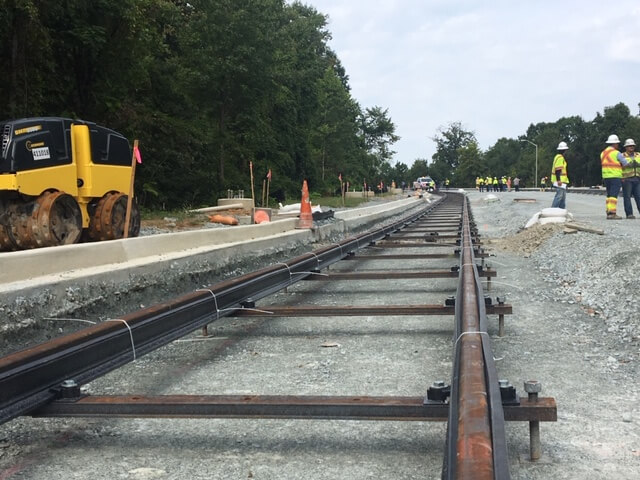 The first bit of track for the Purple Line was put down in Lanham. Photo by Bruce DePuyt

Hogan said the years-long, $5.6 billion project will produce 6,300 construction jobs and will “transform many of these forgotten communities inside the Beltway. … We’ve already seen more than $2 billion in office, residential and commercial projects launched or planned in the Purple Line corridor,” he added.

During his presidential campaign, Donald Trump pledged repeatedly to boost investment in roads, bridges and other projects, but he has yet to follow through. Hogan is hoping to use his chairmanship of the NGA to jumpstart infrastructure activity.

He recently returned from an “Infrastructure Stakeholders Summit” in Boston, where he and other governors met with industry representatives.

“I was proud to point to the Purple Line as an example of the kind of forward-thinking project that other leaders across the country should be thinking about — a partnership between the federal, state and local governments and the private sector.”

The Purple Line, which has been on the drawing board for decades, got the green light from Hogan early in his first term, drawing praise from local officials and many inner-Beltway residents.

The project is the largest public-private partnership transit project in the nation.

Hogan’s bid to widen Interstate 270 and the Capital Beltway (I-495) would be the largest “P3” project of any kind, anywhere in the world, he told reporters.

While the Purple Line will take “at least 17,000 cars off the road each day,” Hogan said, the project doesn’t reduce the need for large-scale widening of I-495. “We’re still going to have massive traffic jams on the Beltway.”

Negotiations are ongoing between the State Highway Administration and local planners, who have raised significant objections to Hogan’s plan. Those planners control some of the parkland the state would need to add four lanes to the Beltway and I-270.

“We are getting through a number of these issues,” said Maryland Transportation Secretary Pete K. Rahn, but he did not elaborate. “I certainly hope that we will be at a point where we will be able to move forward on these projects.”

“I can’t say that every single person is in 100 percent agreement on everything, but we are moving forward.”

Rahn said a portion of the Purple Line will be up and running by 2022, but the initial segment of operation will only include some of the 21 stations that will eventually be built.

The project is being built by Purple Line Transit Partners, a transportation consortium, and the company’s new CEO, Peter van der Waart van Gulik, said that since his arrival in April, construction activity has increased from five miles of track to 12.

Although the Purple Line is a top priority for Montgomery and Prince George’s counties, and they are funding a substantial portion of the project, top local officials did not attend Hogan’s event Thursday. Local officials said they were only notified of the ceremony on Tuesday, too late to rearrange their schedules.

Sen. Malcolm Augustine (D-Prince George’s), a former member of the Metro board of directors, did attend but did not speak.