Business and environmental leaders don’t always find themselves rowing in the same direction. But in Queen Anne’s County, they are united in opposition to Gov. Lawrence J. Hogan Jr.’s push for a third Chesapeake Bay crossing.

Hogan’s stated preference for a new span next to the existing Bay Bridge has stoked fears that traffic — already life-altering — will worsen, first-responders will continue to be hampered, pollution will increase, and property values will tumble.

The leaders see little, if any, potential upside to an additional crossing between Anne Arundel County and Queen Anne’s.

“I see it as being nothing but a negative,” said Jay Falstad, executive director of the Queen Anne’s Conservation Association.

“When Governor [William Donald] Schaefer’s ‘Reach the Beach’ program occurred, that is when a lot of growth and development occurred on Kent Island and around Easton and going southward,” he added. “It’s had the effect of essentially making residents on Kent Island prisoners in their houses on the weekend, because there’s just so much traffic coming through.”

Linda Friday, president of the Queen Anne’s County Chamber of Commerce, said congestion in the region has been “very crippling.”

“From Thursday until Sunday, it’s constant traffic,” she said. “Businesses close early or they close on weekends because their staff can’t get in, or they’re late.”

Last week the Maryland Transportation Authority announced public hearings and additional study on three potential crossings from Anne Arundel to the Eastern Shore and a fourth option, the federally-mandated “no build” alternative.

The next day, Hogan (R) appeared to contradict the authority, announcing in a tweet that only one option — Corridor 7 on MDTA maps — is worth pursuing.

“There is only one option I will ever accept: adding a third span to our existing Bay Bridge,” the governor wrote.

“While the federal process requires multiple proposals, the data is indisputable— this option would maximize congestion relief & minimize environmental impact.”

“We’re not wall flowers when it comes to this type of proposal and we’re prepared to use the resources that we have, including a substantial amount of litigation along the way, to make sure that the state and the federal government follow the process to every letter of the law,” he told Maryland Matters in an interview.

Falstad said the 50-year-old Conservation Association has a “strong track record of opposing projects,” having fought a proposed nuclear power plant, a large housing project by the mega-developer K. Hovnanian, and a bid by the State Department to erect the Foreign Affairs Security Training Center (FAST-C) near Ruthsburg.

Despite the opposition, James J. Moran, president of the Queen Anne’s County Board of Commissioners, supports the new bridge enthusiastically. And he applauds Hogan for trying to move the process along. 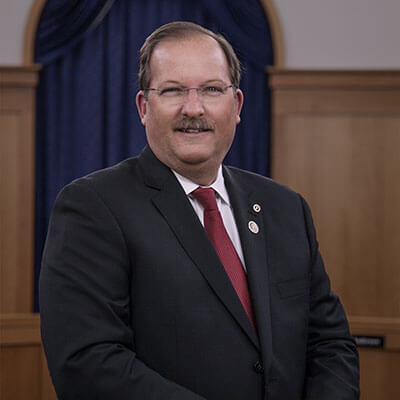 “I’m 100% for it because the traffic is already here,” Moran, a Republican, said. “To move it anywhere else would just be foolish and would not be cost effective.”

He said a third span would “bring relief to our weekends so we can move around” — and that not adding capacity “would kill the county.”

Moran said the county commissioners will hold town hall meetings to give residents a chance to offer their opinions —and he will have a message at the ready to those who oppose a third span.

“To the people who don’t want it, I will say, ‘How long do you think you can survive with the traffic getting worse every year?’”

Moran said a development boom in Sussex County, Del., is responsible for much of the congestion Queen Anne’s endures.

“Delaware has had out-of-control growth for the last decade. Ever since we came out of the last recession.”

‘Have us at the table’

Friday, the chamber president, echoed concerns expressed by state and local elected officials in Montgomery, Prince George’s and Frederick counties regarding the proposal to widen Interstate 270 and the Capital Beltway (I-495).

“One of the things that the state needs to be mindful of is to have open communication with the communities that this is going to effect,” she said.

“Having one or two of our county commissioners go to the Maryland Department of Transportation, knocking on their doors to find out what they’re doing — that’s not fair to the people who live on the Eastern Shore,” she added.

Friday and Falstad asserted that the state is sending mixed signals. Hogan’s tweets came one day after the transportation authority announced statewide public hearings and in-depth study of four potential options for reducing congestion on the Bay Bridge.

“I thought it was a horribly inappropriate comment to make,” said Falstad.

“Are his departments, which are evaluating these crossings and play a crucial role in the analysis, now going to say, ‘Well, the governor has already made his position known but we’re still going to continue looking at these other options?’”

Moran, the board president, said Hogan’s urge to speed up the action is welcome.

“This process needs to be pushed along,” he said. “I think most of the counties on the Eastern Shore would agree that putting [the bridge] here is the right thing to do.”