History is a stern taskmaster. Back in the bad old 1960s, the State of Maryland spent $1 million on a study to determine the most feasible route for a second bridge to ease traffic across the Chesapeake Bay between the Eastern and Western shores of the parted state.

The ministers of influence in Annapolis settled – brace yourself – for a second span parallel to the existing bridge which had opened to traffic in 1952 and had since been showing its clogged age with regular backups on both shores.

Construction of the original two-lane bridge began under Gov. William Preston Lane, a Democrat for whom it is named, and opened under Gov. Theodore R. McKeldin Jr., a Republican. Lane had died earlier in the year before the dedication in 1952.

Two other routes had been rejected – one which would have linked Calvert County to Dorchester County, and another that would have connected the east side of Baltimore County to a point on the Eastern Shore.

But Rep. Clarence D. Long, at the time the congressman from the 2nd District, which then bracketed all of Baltimore County, had another, contrarian, idea: if a second bridge was to be built, it should accommodate his constituents in Baltimore County.

Long launched a TV ad campaign – a novel political tool at the time – built around the slogan, “Why build a bridge next to a bridge?” that was part of a referendum on the parallel span in the 1966 statewide election. The referendum blocking construction of the bridge carried by 289,418-248,942 votes.

The governor of the moment, J. Millard Tawes, largely ignored the results of the referendum and the will of the voters, and dismissed Long as a crank who would cost the state millions in construction delays.

When legislation to create the second Bay Bridge went to the House of Delegates’ floor for debate, Majority Leader Del W. Dale Hess (D-Harford) was put in charge of guiding the bill to passage. A master of malaprop, Hess delivered these lines in its defense, catalogued as Hessisms:

“This deal ain’t no different than any other deal the governor got us into” and “all roads lead into the Bay.”

Construction of the existing parallel Bay bridge was authorized in 1968 by Gov. Spiro T. Agnew (R) but did not begin until 1969 and was completed and dedicated in 1973 under Gov. Marvin Mandel, with some of the very same players but a new concept and design that several years later would play out in Mandel’s public corruption trial and Agnew’s eventual bribery and kickback investigation and resignation as vice president.

(Agnew’s State Roads Commission chairman, Jerome Wolfe, later became head of a division of the engineering firm that designed the bridge. Wolfe later admitted to keeping detailed lists of every bribe and kickback Agnew received from architects and engineers.)

When Tawes was sworn in as governor in 1959, his principal fundraiser and bagman was a secretarial school owner named George H. Hocker, who, capitalizing on the association, later became a beer lobbyist and doubled as a cork broker for the industry. The annual bill to increase taxes on beer, which was regularly defeated, was dubbed the “Hocker rocker.” (Hocker was said to assess companies doing business with the state set amounts that his couriers picked up in weekly installments disguised as petty cash.)

Hocker had another idea once Tawes was installed as governor. He established an insurance company, called it Tidewater Insurance, and installed Tawes’ son, Philip, as its resident agent in its only branch office in Crisfield, Somerset County, Tawes’ hometown.

Tidewater’s main office was adjacent to what was then Friendship Airport, now BWI-Thurgood Marshall Airport, among a cluster of buildings that house the National Security Agency (NSA), some of which Tidewater would later build. To be president of Tidewater Insurance, Hocker recruited a young insurance executive, Harry W. Rodgers 3d.

The connection between transportation projects and Tidewater Insurance: costly performance bonds, or insurance policies, required of all contractors doing state construction work, and anyone else who wanted access. That is, until Tidewater decided to expand into the engineering and construction business.

Tidewater flourished under Tawes (with Hocker strictly a background figure and a significant ownership partner), as it would under a future governor, Mandel, and an incumbent president, Lyndon Baines Johnson.

Fortune smiled upon Tidewater when Tawes invited Rodgers to accompany him to a fundraiser at the White House. During the table-hopping interlude, Johnson stopped at Tawes’ table to shake hands.

“Mr. President,” Tawes said, “this is Harry Rodgers, a good friend of mine. I’d appreciate anything you can do for him.” 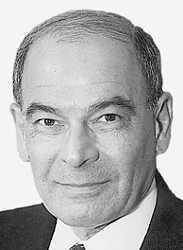 Johnson turned and motioned to Cliff Carter, a Texas crony and treasurer of the Democratic National Committee.

“Cliff,” Johnson said, “this is Harry Rodgers. Take care of him.”

Soon, Carter cut himself in on the action and was added as a participant in Tidewater’s growing enterprises, which would include affiliates in construction and engineering, among other businesses, that would undertake mammoth federal projects such as the Social Security annex in Woodlawn, as well as – you guessed it – incidentally the parallel Bay Bridge and largely the Francis Scott Key Bridge in Baltimore.

By now, Tidewater had become so big and omnipresent that Rodgers bought out Hocker and gave him the old heave-ho. And Mandel’s alter ego in the House, Hess, declined to run for reelection and was added to the roster of Tidewater partners in addition to backstage-managing Mandel’s 1970 reelection campaign. Practically, they traded paper, pieces of Hess’ businesses for a piece of the Tidewater conglomerate.

At Mandel’s 1977 corruption trial, the house of Tidewater came crashing down. As the layers were peeled away by prosecutors, it turned out that Zollman Engineering, an affiliate of Tidewater, had substantial contracts in the construction management of the Francis Scott Key Bridge crossing Baltimore’s harbor. It was also revealed at the trial that Mandel had a letter of agreement to join Tidewater when his public career was over.

The Key Bridge replaced what was originally designed as a tunnel to provide a dual underwater crossing to the original Harbor Tunnel. The bridge was wider and less expensive to build than a tunnel. The Zollman engineering firm was said to have a unique concrete system that was equal to steel but far less costly.

The state sold $220 million in bonds to cover the cost of both bridges and later got into a dispute over $30 million in cost overruns.

Agnew had awarded the Bay Bridge design contract to the Griener Engineering, a politically active firm in Baltimore. Griener had been under investigation by federal prosecutors in the bribery scandal that began with Agnew’s abbreviated governorship and ended his vice presidency in disgrace. (Mandel used Griener’s corporate Lear Jet for out-of-state travel on several occasions.)

What’s more, Charles Zollman himself, a Philadelphia resident, had somehow, through a series of intricate transactions involving Tidewater, become the owner of Mandel’s house in Baltimore, which Mandel sold after becoming governor in 1969. Maryland governors are required by law to “reside at the seat of government,” in Annapolis. It was said that Zollman needed a crash pad during business visits to Maryland.

So here we are again, back to the future, not to suggest that there’s a nefarious connection between the past and the present. The State of Maryland is once again considering the relief of traffic congestion between its Eastern and Western Shores – another million-dollar study with 14 possible corridors, which have been winnowed to three, and, then again, to one in the mind of Gov. Larry Hogan (R).

“There is only one option I will ever accept: adding a third span to our existing Bay Bridge.” Hogan Twittered, as reported by my colleague Bruce DePuyt.

“While the federal process requires multiple proposals, the data is indisputable – this option would maximize congestion relief & minimize environmental impact.”

Opposition to any bridge originating in Anne Arundel County, on the Western Shore, is already coalescing, with the county’s executive, Steuart Pittman (D), the point man. More congestion and environmental damage are Pittman’s main concerns. So, too, do the residents of Kent Island feel cramped by the seamless traffic the bridges dump into their waterside habitat.

They are no different than the background noise to any proposed transportation project. If any evidence is needed, consider the opposition to Hogan’s proposed expansions of I-495 and I-270, two major roads in the Maryland suburbs around Washington.

Construction of any new Bay crossing, if history is any indicator, is years away, if at all, with Hogan long-gone as governor, which is no guarantee that preliminary contracts won’t be awarded before he leaves office in 2023. The road-and-bridge building industry must love this guy. He keeps building, and the cars keep multiplying.

But hang on to your tolls. We’ll cross that bridge when we come to it, or not.