Overcrowding. Leaky roofs. A lack of temperature control. All are problems in Maryland schools – but what should be addressed first?

A workgroup is examining whether the state should create an index to compare the relative condition of school buildings throughout the state – from electrical hazards and asbestos threats to overcrowding and missing playground equipment.

At the most basic level, threats to life and health would be most heavily weighted, while school infrastructure that is beyond its expected life but still in good repair would be documented, but not heavily weighted as a deficiency.

At the moment, school construction funding in state law isn’t tied to such an index – but it could be if there’s sufficient support from education officials, lawmakers and the public.

A nine-member workgroup met in Annapolis on Wednesday morning to wade through a proposed formula to apply scores for physical facility deficiencies as well as conditions that could hinder teaching and learning.

A statewide assessment of school facilities was recommended by the Knott Commission, which made the recommendations contained in the 21st Century School Facilities Act of 2018.

The workgroup’s task was to be based on a statewide school facility assessment that was supposed to be complete by July 1; but a bid protest during the procurement process means that task hasn’t yet begun.

A chief goal of the workgroup is to consider how various deficiencies in school buildings should be weighted compared to one another, and then make a recommendation about whether scores on a deficiency index should play a role in funding decisions. For instance, should state funding be prioritized for one type of project over others?

There are nearly 1,400 active schools in the state with more than 140 million square feet. The total asset value of state schools is estimated at $55.3 billion – more than the value of the state highway system.

Over a 20-year period, the state and counties paid a combined average of $1.9 billion a year on school construction and maintenance, below an industry standard of more than $2.2 billion, Robert Gorrell, the executive director of the Interagency Commission on School Construction, said. 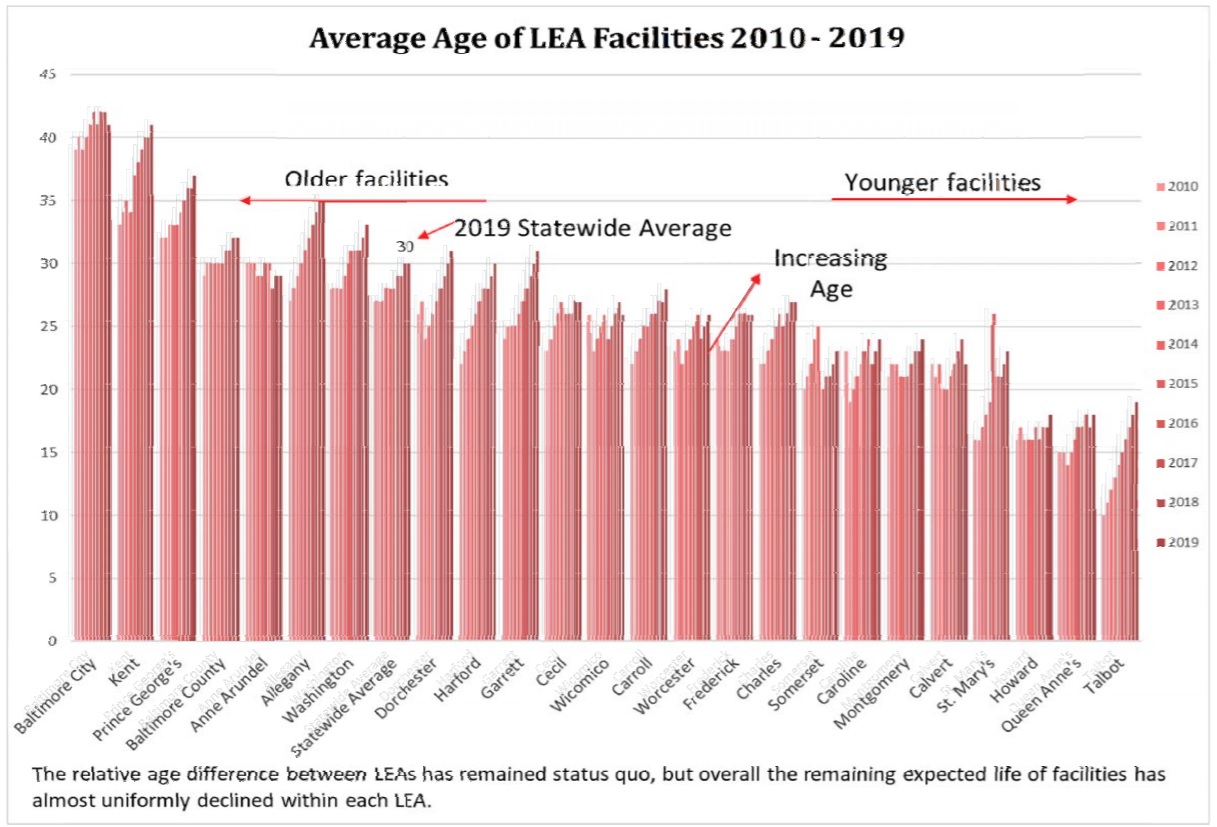 The deficiency index that lawmakers are considering is based on a similar formula used in New Mexico, where Gorrell spearheaded a multi-year schools assessment and funding program that has been emulated in other states.

Del. Marc Korman (D-Montgomery), a member of the workgroup, said he considers it a “coup” that Maryland was able hire Gorrell away from New Mexico, but said the committee should also consider how to implement a facilities program particular to Maryland, where counties shoulder much of the cost of school construction.

Sen. Bill Ferguson (D-Baltimore City), on the other hand, said after the meeting that assessing school facilities on a statewide basis is a “process that is long overdue.”

He referenced the Maryland Constitution’s guarantee of “a thorough and efficient System of Free Public Schools.”

Frederick County Executive Jan Gardner (D) made one suggestion – that the workgroup consider using a phrase other than “deficient” to describe schools. By way of one example, a school facility could be in outstanding condition, but receive a high deficiency score if it’s overcrowded.

Gardner said she is also concerned about some of the tasks on the workgroup’s future agendas, including looking at whether to create incentives that encourage local school systems to plan and design schools with a lower total cost of ownership over time.

Charts used by the Interagency Commission for School Construction that show increasing square footage over time fail to account for modern requirements at schools including security features, accessible facilities, media labs, libraries and community spaces, Gardner said. She thinks the workgroup, in addition to its other tasks, should create guidelines on necessary square footage for new schools.

Workgroup members could begin finalizing components of a deficiency index as early as next month. A final report is due in December.

Legislative leaders have promised that a top priority for the 2020 legislative session will be passage of a $2 billion school construction plan.

Md. State Board of Education Votes For an ‘Off Ramp’ From School Mask Mandate