Boardwalk bros. Gov. Lawrence J. Hogan Jr. (R) and Comptroller Peter V.R. Franchot (D) took their bipartisan show on the road Friday, meeting each other for a midday walk down the Ocean City boardwalk for some fries, pizza and photos.

The pair were barely on the boardwalk before Franchot pulled out a signature coin to present to a retired Korean War veteran, William A. Campion Sr., 85, who said he spends time “just about every day” handing out balloon animals to children who pass by.

Hogan soon reached out to hand over one of his own coins, commenting that it was a much rarer gesture than the comptroller’s.

The governor’s coin had a little more glitz than Franchot’s, Campion said, but they were both the nicest of a small collection he’s ever received.

The comptroller and governor ambled along the boardwalk, taking up games of skee-ball at Marty’s Playland, sharing Thrasher’s fries with staff members and strangers and sticking their heads into a wooden cutout of lifeguards on the beach. They also handed out dueling proclamations along the way as well to Dolle’s Candyland and Piezano’s Pizza & Italian Restaurant.

Hogan, patting his torso, said he’d had his share of Piezano’s slices over the years – and enjoyed them.

“Are you ready to watch the governor burn the roof of his mouth with boiling hot cheese?” Hogan asked as he lifted a simmering slice of pepperoni. “…Actually that’s really hot,” he said before setting it down to cool, commenting that he needed his mouth to be in tip-top shape for a Saturday speech back at the convention center.

During the proclamation presentation, Franchot paused to hand out another challenge coin – this time to the young daughter of Timur Unal, a member of the family that owns Piezano’s.

Baby Aya should use it when she starts teething, Franchot said, just before Aya started gnawing the edges.

Franchot said it was his daughter Abbe who discovered the teething trick with the comptroller’s granddaughter, Vivienne.

Chuck a coin in the icebox for a few minutes and then “it takes the pain right away – and it’s too big to swallow,” the comptroller told the Unals.

Harris said he thinks a wind energy proposal 14-or-so miles off the OC shore should be revisited in light of concerns from the Coast Guard (shipping channels) and Department of Defense (military communications), and since technology has yielded much larger turbines since the project was first approved. Meehan wants the turbines placed farther out to sea to avoid disturbing horizon views. 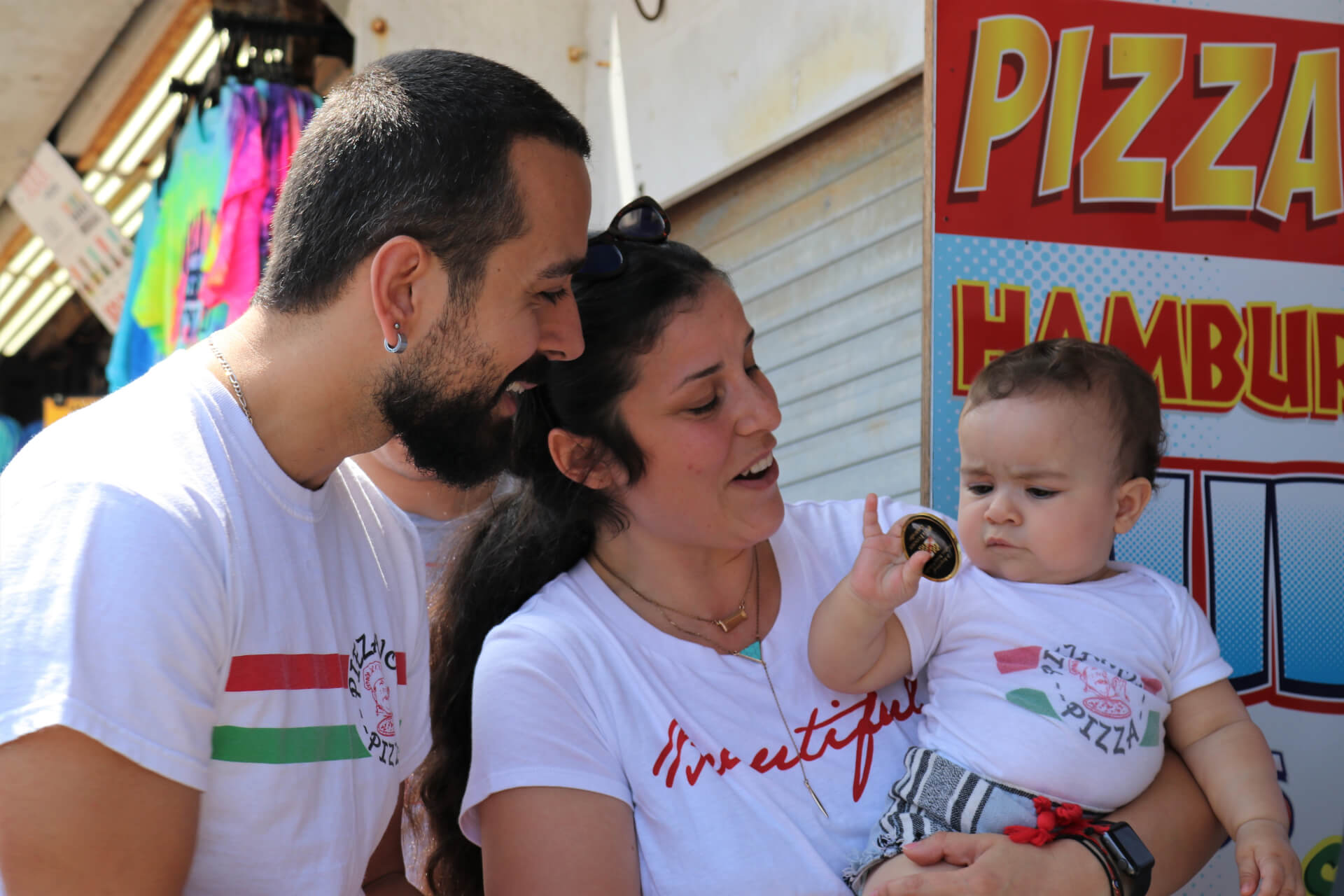 Hogan listened, but has noted that his administration has limited authority over the two proposed projects, which are governed by federal law and the Maryland Public Service Commission. The PSC approved both projects despite objections over shoreline views from the Town of Ocean City, Worcester County and the Hogan administration.

“Everybody had various concerns, but it was basically about who was going to fix it,” Hogan said of the conversations on the boardwalk. “Everyone is concerned that the towers are now taller and the viewshed is impacted.”

Before leaving the beach, Franchot said he had a different view.

“I’ve been a huge supporter of the wind turbines in Western Maryland. I happen to think they’re beautiful up on the ridgelines,” he said.

Franchot said he was happy to support ocean-based turbines, but understood the emotions in Ocean City about the proposed project. “I think they’d look OK,” Franchot said, before adding: “I’d be happy if they moved it back a little bit so the folks who are concerned about offshore wind wouldn’t even see them.”

Adrienne Jones, superstar. Three months into her history-making tenure, House Speaker Adrienne A. Jones (D-Baltimore County) got a hero’s welcome from dozens of women at the Maryland Association of Counties convention in Ocean City Friday afternoon, as she headlined the annual Women of MACo luncheon.

She’s hardly anyone’s idea of a spell-binding orator, but the women on hand – elected officials, along with top-ranking staffers and bureaucrats – hung on Jones’ every word as she detailed her rise from Baltimore County government staffer soon after she graduated college in 1976, to her appointment to the legislature in 1997, to emerging as the compromise choice to replace the late speaker Michael E. Busch (D) on May 1.

Before Jones spoke, every single person in the room introduced themselves, and Jones, the first woman and the first African-American to serve as speaker in Maryland, listened intently.

“The commonality is, you’re doing public service,” she observed.

Jones, 64, said she joined the Baltimore County Democratic Central Committee in the 1980’s: “I worked in everyone’s campaign there was to work with. Women – we support everybody else. We never really run for ourselves.”

When the late Del. Joan N. Parker (D) died in 1997, Jones was urged to seek appointment to her seat, and she said she “reluctantly” agreed.

When she got to Annapolis, “I would see males get up and – to quote James Brown – they would be talking loud and saying nothing,” Jones said, to appreciative laughter. “I was sitting in my office, reading bills, and thinking, ‘maybe this isn’t for me.’”

Jones said her attitude – and her trajectory – changed after the 2002 election, when a Republican, Robert L. Ehrlich Jr., was elected governor, and the House speaker, Casper R. Taylor Jr. (D), lost his reelection bid. Busch, Taylor’s successor, asked her to serve as his speaker pro tem, the lawmaker who presides over the House chamber whenever the speaker isn’t present.

“The press release said I was a consensus-maker and don’t really have a big ego,” she recalled ruefully.

But Jones said from this she learned valuable lessons about politics: “You never know when opportunities present themselves – and you never know who is watching.”

Jones continued by noting that there are more women Democrats in the House of Delegates than men – and that half of the standing committees in the House are led by women.

“It does make a difference in perspective,” she said. “Not to take away from the men, but that perspective was needed.”

Asked what the women in the audience can do to encourage more women to get into politics and take on leadership roles, Jones replied, “Just get them the example of you and tell them they do have a voice,” she said.

And asked what the biggest challenge of her new job has been so far, the speaker did not hesitate: “I can’t clone myself,” she said, “and be every place.”