Rockville residents will have a voting experience unlike any other this year – and the circumstances of filling out a ballot are all up to them.

The city is holding a mail-in election for council and mayor, with the hopes of boosting turnout and allowing residents to make more informed decisions while voting in the comfort of their own homes.

Three states already hold elections exclusively by mail and more are on the way, but Rockville is the first municipality in Maryland to try such a system – though one centralized polling place will be open on Election Day for those who wish to vote or drop off their ballots in person.

In Rockville, advocates and officials hope to see a sharp increase in voter participation come November.

Turnout in the last three city elections has been 16.94 percent, 16.51 percent and 15.87 percent, City Clerk and Director of Council Operations Sara Taylor-Ferrell said. “I am hoping with all the updates that we get a much higher turnout,” she said.

Setting Up A System

The Rockville City Council and mayor voted unanimously in April 2018 to shift to a vote-by-mail system after considering other alternatives to boost participation in municipal elections. 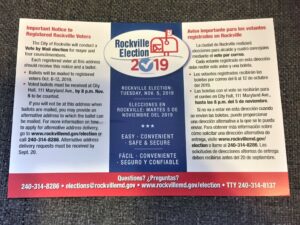 The city of Rockville is sending informational brochures to residents ahead of its first vote-by-mail election. Photo by Margaret Thale.

Since then, the city has been taking lessons from other municipalities that moved to vote-by-mail systems, Taylor-Ferrell said, including cleaning up the voter registration database, helping voters get properly registered and undertaking a lot of educational outreach.

The city has sent three mailers to city households explaining the new process and will send a fourth in mid-September. Voters who register by Sept. 20 will qualify to automatically receive a mailed ballot, which will be sent in early October.

Rockville will also host one polling place at City Hall on election day and a 24-hour dropbox for completed ballots.

Amber McReynolds, the executive director of the nonprofit, nonpartisan National Vote at Home Institute, said such dropboxes are a growing trend in Western states, where vote-by-mail programs are more prevalent.

The former director of elections for Denver, she came to Rockville early in the planning stages for their elections to offer advice.

She estimates that Rockville’s turnout could double under the vote-by-mail system.

“And I might go higher than that depending on the races and how controversial the election may be or how engaged the citizenry is,” she said.

Right now, there are nine people vying for the four-member city council and two mayoral candidates.

Last year, vote-by-mail states had a collective turnout that was 11 points higher than the national average. All three of the states that ran universal vote-by-mail elections – Colorado, Oregon and Washington – were in the top seven states for turnout, McReynolds said.

Since then, Utah has converted the last of its counties to a vote-by-mail system. Hawaii is transitioning to a 100 percent vote-at-home system.

In California, counties can opt in – and a handful have done so. By next year in California, more than 50 percent of voters will get their ballot by mail – a number larger than the majority of U.S. states. North Dakota and Nebraska also offer mailed-out ballot voting for some counties.

Vote-by-mail has always been a more prevalent option in the West because of the dispersed population centers in vast states like Montana, which offers a permanent vote-by-mail option.

New Jersey is the only East Coast state that has permanent no-excuse absentee voting; Nevada and Arizona also offer the option. The state of Ohio sends absentee request forms to all voters in every election.

Maryland has allowed no-excuse absentee ballots since 2006, but the name is a “complete misnomer” because it still implies that a voter must be away from home to ask for a mailed ballot, Del. Julie Palakovich Carr (D-Montgomery) said. She sponsored legislation this year that would have replaced references to “absentee ballots” with “vote-by-mail” ballots and cosponsored a bill from Del. Alonzo T. Washington (D-Prince George’s) that would have established a permanent absentee ballot list.

Neither of the measures passed.

Palakovich Carr was also on the Rockville City Council when it voted to shift the city to a mail-based election.

She thinks it’s “probable” that a successful Rockville election could lead to a proliferation of vote-by-mail in the rest of the state. Other jurisdictions are paying close attention to what happens there and other states have seen a progression from more mailed-out ballots to local mail-based elections to broader movements, she said.

“In numerous jurisdictions it plays out until you’re at a point where so many people are voting through the mail, people say it doesn’t actually make sense to have in-person elections anymore and it would be easier and cheaper if we just do everything by mail,” Palakovich Carr said.

She plans to reintroduce her legislation to rename Maryland’s absentee program with Sen. Katie Fry Hester (D-Carroll and Howard), using language that’s more amenable to elections officials. They’re working on what that might be over the summer.

“I think change is the biggest barrier” to expanding vote by mail, McReynolds said. “When you have policymakers getting elected under a certain system and you go to them and say ‘Hey, I think we should change this system,’ they say ‘Well, I just won in the current model, why would we do that?’”

Back in Rockville, there’s already one statistic that could bode well for turnout in the November election. As of Thursday, there were 43,984 registered voters in the city, an increase from the 40,749 voters in the 2015 election.