Fourth in a series on new leaders in five major counties.

So when a business owner made a bold statement during a recent morning meeting – “We want to be for Howard County what Under Armour is for Baltimore” – the Ball administration was moving on the issue by lunchtime.

The company, Mosaic Learning, is exactly the kind of growing business the county is trying to entice to locate in the Columbia Gateway Innovation District in Columbia.

On Ball’s 100th day in office, he and the Howard County Economic Development Authority signed a memorandum of understanding for a 50,000 square foot incubation center with a focus on innovation, cybersecurity, and technology in the district. The plan, which was first initiated by his Republican predecessor, Allan Kittleman, is to reinvigorate the broader business district, first with farmers’ markets and food trucks, and later with new land uses and more transportation.

Like most everything else in Howard County, Ball hopes the gateway project will become the exemplar for other communities in Maryland – and maybe around the world.

Being exemplary is not unknown to Howard, a community that finds itself ranked highly on many “most” lists. Most educated. Healthiest. Best schools.

And while his head is often tilted toward the sun, Ball also knows there are other statistics hidden in the shadows.

“When we have a county that is so successful, it is easy to become complacent,” Ball said. “…So I try to embrace that fierce urgency of now.”

He can readily offer his own batch of figures, as he did recently at a meeting of the Maryland Equity and Inclusion Leadership Program:

— the county’s overall school suspension rate is 2.2 percent, but grows to 5.4 percent for black students and 7.5 percent for students with special needs.

— Howard County schools have a graduation rate around 92 percent, but that drops to 88.6 percent for black students and about 77 percent for Hispanic students. 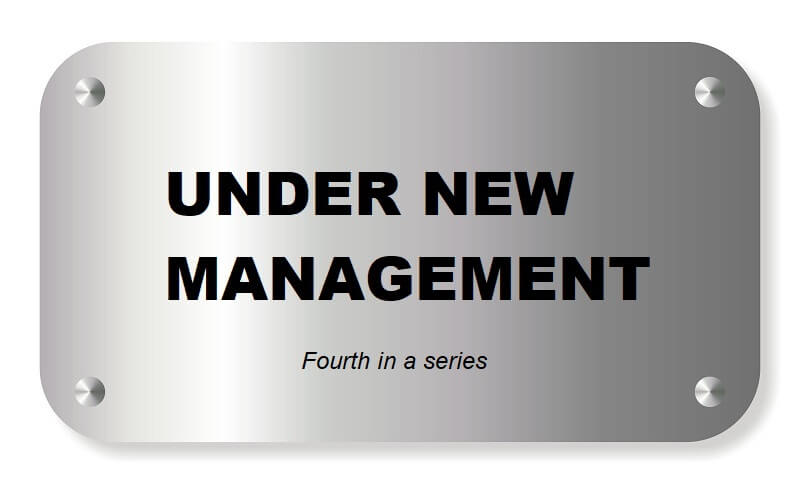 “When you’re in a place when there’s so much affluence, sometimes it’s easier to fall through the cracks, it’s easier to feel left behind, to suffer in silence,” Ball told the crowd in the training program. “…They need people like us who are giving voice to the voiceless.”

It was Tara B. Taylor, director of education and outreach at the Maryland Commission on Civil Rights, who invited Ball to speak to the participants in the leadership program.

“They needed a little cheerleading,” said Taylor, who first met Ball more than two decades ago when they worked in mediation at the Maryland Attorney General’s Office Consumer Protection Division. “He’s good at that.”

Starting with the people

Supporters say Ball brings his varied background as a mediator, community activist, educator and firefighter to the county executive position. It explains his focus on hearing from all sides and taking advice from a trusted “kitchen cabinet” of informal advisers.

He is also influenced by the work of his wife, Shani, a school nurse, and their two children, Alexis and Alyssa.

Ball said he’s had to work past critics who said his election as the first black county executive of Howard – where the overall population is 18 percent black – was unlikely. And now that he’s county executive, he is focused on bringing more voices into power, always with the goal of finding common ground.

“He starts with people. He will talk to a lot of people about a particular issue before he makes his mind up about something,” said Ian Kennedy, executive director of the Downtown Columbia Arts and Culture Commission and a Howard County Housing Board Commissioner.

Kennedy, who lives near the Ball family in the Oakland Mills village of Columbia, was head of the county executive’s housing transition team. Free to embrace wide-reaching goals, the team recommended creating a more-comprehensive-than-ever strategic housing plan and shifting the lens to view housing as “a fundamental, essential component of community infrastructure—like roads, schools, and water utilities.”

State Sen. Guy J. Guzzone (D), who served briefly with Ball on the county council before making the jump to Annapolis, headed Ball’s transition team, which was packed with big names in county affairs.

Guzzone said he urged Ball to undertake his first run for political office, and he hasn’t lost faith in him since.

Guzzone said he thinks Ball’s optimism helps him focus on the bigger picture, and deeper issues.

“These jobs are not for the faint of heart. …It’s really easy to try to kill something or to mess something up and you see it happen everywhere,” Guzzone said. “But to actually build a community and build collaboration among people, that takes optimism. Because you’ve got to just believe it at your core.”

Given his history in Howard, where Ball holds the distinctions of being both the youngest county council chair in history and the third-longest serving council member, he was able to pull from longtime relationships to hire trusted lieutenants.

Myers retired last year as a captain, but came back after Ball approached her.

Uhlhorn has been with the county fire service for three decades – and in fact taught Ball’s fire academy classes.

She was thinking more about retirement than becoming chief when Ball approached her for the top job.

But she was also inspired by Ball’s vision. “We share a lot of the same core values and I wanted to be part of where he was going,” she said.

However, Ball has faced challenges during his tenure as county executive so far, many of them budgetary.

Part of the vision he and Uhlhorn shared included a 6-cent increase to the county’s fire tax to increase staffing and update and add facilities. Now passed, the increase will yield an additional $29.5 million in revenue this year. 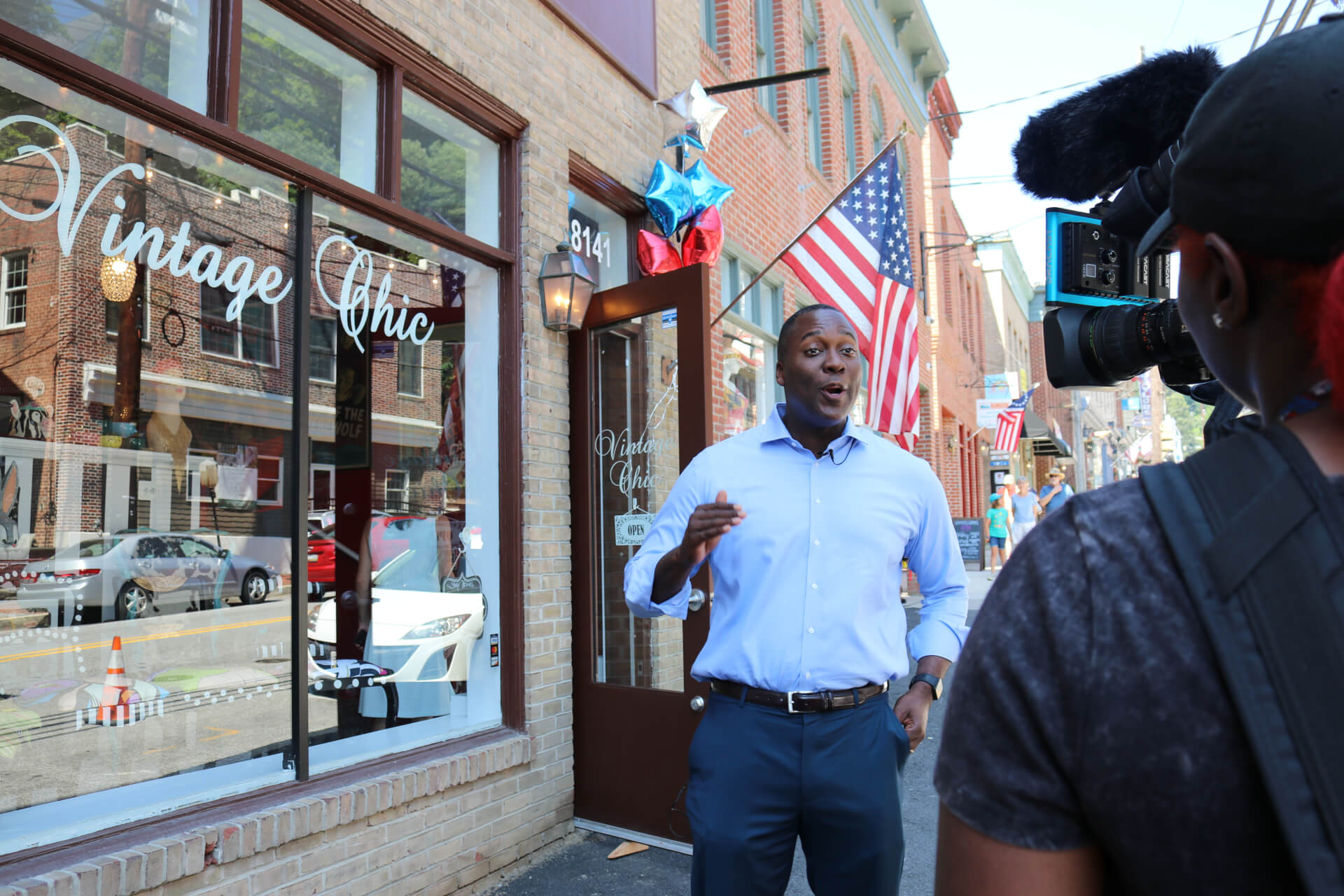 Howard County Executive Calvin Ball (D) talks to a news crew after attending a grand opening celebration for Vintage Chic, a new business in the historic Ellicott City district that has been ravaged by deadly floods in 2016 and 2018. Photo by Danielle E. Gaines.

The most pressing fiscal issues he’s faced in his short tenure have been balancing an education funding gap and beginning to cover the high price tag of flood mitigation plans for Ellicott City, estimated to cost between $113 million and $140 million.

In December, the Howard County school superintendent sought a jump in the county’s share of school funding – from $600.1 million in fiscal 2019 to more than $722 million this year. Superintendent Michael Martirano said the increased funding would have covered hundreds of new positions and was needed after years of neglect.

The Howard County Board of Education reduced the request to $689.3 million from the county.

But Ball – a former university professor who’d previously found himself trying to increase education budgets as a councilmember – said the requests from the school system were unachievable in one year.

He proposed a much smaller increase—$5.1 million— before the council finally settled on $607.2 million. The modest increase required the school board to cut plans to hire additional employees, but did not result in any layoffs, Martirano said in June.

Ball has since called for a state performance audit of the school system, with the goal to spend money more efficiently. His resolution was supported by the council last week.

In historic Ellicott City, where fast-moving floods two years apart have claimed the lives of three people, the county will devote $15.3 million of this year’s capital budget for projects in the Tiber-Hudson watershed. Eventually, the multi-year project will result in the razing of four buildings, boring a tunnel and building new retention ponds to divert stormwater runoff.

Ball has touted his administration’s efforts to address the opioid epidemic and health care more broadly. He filed a lawsuit against pharmaceutical companies and established the state’s first public-private partnership to provide residential substance abuse treatment. He also launched Practice Howard, a program designed to provide financial incentives to address a shortage of primary care physicians in Howard County.

Suicide was the leading cause of death for teenagers 15 to 19 in the county between 2014 and 2016. A new public service announcement will begin airing in all Howard County movie theaters this week.

“There are misconceptions that talking about problems exacerbates them. …It’s ok to ask someone who looks like they’re struggling, ‘Hey, are you OK? Hey, is there anything that you need?’” Ball said. “And it’s OK to ask for help.”

Zainab Chaudry, a social justice activist in the county, supported Ball’s campaign after hearing his ideas to address racism, discrimination and harassment, and she’s been pleased to see his focus on mental health.

“It’s an issue that transcends race, religion, ethnicity and sexual orientation, and so many people are caught in the midst of this crisis,” she said. “It’s obviously a very tough topic and very sensitive. But I’m glad to see that his administration is finding the courage to open up about this.”

For Ball, there’s also often a focus on the environment in his policy decisions.

His administration signed on to the “We Are Still In” declaration committing to the Paris Climate Agreement. And Howard was the first county in the nation to formally accept the U.S. Climate Alliance’s Natural and Working Lands Challenge, and reopened the Agricultural Land Preservation Program.

“Having farmers be successful is a way into the future and a way to help grow business, grow food and grow people,” Ball said of the land preservation program. “…And as we’re seeing a climate that is changing, as we’re seeing more intense and frequent storms, we need to make sure that we’re growing our food.”

The Ellicott City plan, he said, would not be sufficient if it only considered the climate for today.

“I wanted Ellicott City to be an example for every other nation of resiliency and embracing this future that we have,” Ball said. “…I think when people look over the course of the next decade, 100, 250 years, what they’ll see is that the monies we are investing today will actually be reaped ten-fold.”

Ball has another environmental goal.

“Have you been reading about the trillion trees initiative?” he asked excitedly. “One of the things that they’re seeing is we can actually reverse climate change if we plant a trillion trees.”

Next: A look at Baltimore County

For our look at Prince George’s County, click here.

For our look at Anne Arundel County, click here.