As controversy over President Trump’s attacks on Rep. Elijah E. Cummings and Baltimore City enters its second week, here are three commentaries on the situation.

When I lived in Maryland, I had the good fortune to have Elijah Cummings represent me in Congress. I was always impressed by his strong advocacy for his constituents and for the country, his courageous leadership and his inspirational eloquence.

Cummings doesn’t really need one more endorsement from me, however. In the aftermath of Donald Trump’s ugly racist tweets attacking the congressman, he has found a veritable avalanche of supporters taking his side on what has become a national discussion. Given Cummings’ stellar history of service, that’s not at all surprising.

Trump’s racial tweets were not surprising either. He has proven himself a racist, a thin-skinned bully, and a lazy, uninformed narcissist his entire life. As Eugene Robinson observed in his Washington Post column, Trump’s recent outbursts suggest he is really worried about the 2020 election and is doing the only things he is good at, stirring up his base. Motivated by the prospect of an electoral humiliation and the possibility of prison time afterwards, his ugliness and desperation will increase beyond any of our wildest imagination.

This nasty incident may, as strange as it might seem, have a silver lining. The City of Baltimore has struggled with many of the urban ills that have afflicted older cities which used to rely on manufacturing jobs. No serious person argues that the problems aren’t real. Poor leadership in the mayor’s office has added to the frustration of many citizens. Specific incidents, such as the death of Freddie Gray in police custody, have been seen by some as metaphors for the condition of the city.

The response to Trump’s attack on Baltimore and Cummings may be the catalyst that stimulates the renewed problem-solving spirit needed to address those problems. The clarion call was surely the Baltimore Sun editorial defending the honor of the city and hitting back hard at Trump. Its author, Peter Jensen, abandoned the usual rules of editorial writing to provide a rallying point for defenders of Baltimore. I certainly hope he gets serious consideration for the Pulitzer Prize for his work.

The United States is facing all sorts of serious challenges. As much as Trump likes to attack places represented by Democrats, the reality is that many of those “red” areas on the political map are in much worse shape. The poorest states, the ones with the worst access to health care and those that, ironically, get the most federal assistance, are all part of Trump’s base.

If we could refuse to be distracted by phony, divisive issues, we might be able to summon up the wisdom, energy and resources to tackle the real problems. Lots of cities need help, but the same should be said of the country’s rural areas, the epicenter of the opioid crisis.

Serious commitment of resources from the State of Maryland, rather than just rhetoric, is one of the ingredients needed to address Baltimore’s problems. Gov. Larry Hogan is in a position to have a major impact, but he needs to stop using Baltimore to score political points with conservative voters in the state and show some real leadership.

Similarly, it would be great if we had a president who cared about making the country better rather than one who attacks anyone who disagrees with him and appears to care only for himself and his small circle. For example, a federal urban program could make a huge difference across the country. Long term investment in infrastructure and education could lift the entire nation.

Since it’s out of the question that Donald Trump will change – no one will ever refer to him as the Honorable Gentleman from Queens or Mar a Lago – the best hope to get these ideas addressed is in the 2020 presidential election. In the meantime, however, local and state leaders need to show the same energy that they have in responding to his tweet storm.

And count on Elijah Cummings to continue showing the same leadership in Congress that he always has.

The writer is a political columnist and higher education consultant.

Our Revolution Baltimore City and County:

Mr. Trump has spent a week verbally attacking Rep. Elijah Cummings and Baltimore on and offline. The rhetoric is ill informed, bigoted, divisive, non- productive and is in no way helping Baltimoreans’ quality of life.

Below is a short list of things that Rep. Elijah Cummings has supported and that Trump has deconstructed or just plain not supported:

Additionally, Mr. Trump’s son-in-law has more than 170 housing violations on properties he owns in the Baltimore area, so we invite Mr. Trump to go to Cove Village and ask the residents how life is there under his son-in-law’s slumlord and intimidation tactics. If Mr. Trump claims to care about Baltimore then he should get off Twitter and help to dismantle the systems of oppression that harm Baltimoreans and residents of other cities instead of dismantling systems that protect the vulnerable.

If Mr. Trump claims to care about Baltimore and Rep. Cummings’ district specifically then he needs to send monies to restart the light rail project that Gov. Hogan killed. Thus far all Mr. Trump has demonstrated is that he has a mouth filled to the brim with bigoted, ill-informed, divisive, and non-productive rhetoric and a massive disdain for black people and other multiply marginalized peoples in Baltimore and nationwide.

Our Revolution Baltimore City/County demands that the House and Senate leadership on Capitol Hill take action by censuring and condemning Mr. Trump for his recent series of bigoted actions, vote for the legislation mentioned above to become law, and then create and vote for a federal reinvestment package of monies directly earmarked to Baltimore City’s most vulnerable communities, which will provide infrastructure rebuilding and economic opportunities that will allow a community to be revitalized.

Only by signing the above acts into law and the proposed reinvestment package will Mr. Trump show he cares about Baltimore City. Baltimore’s most vulnerable population can no longer wait for improvements because Mr. Trump thinks that politics is a big game to be played. The time for Congress to act is now!

This commentary was written by Sarahia Benn, the organization’s legislative director. 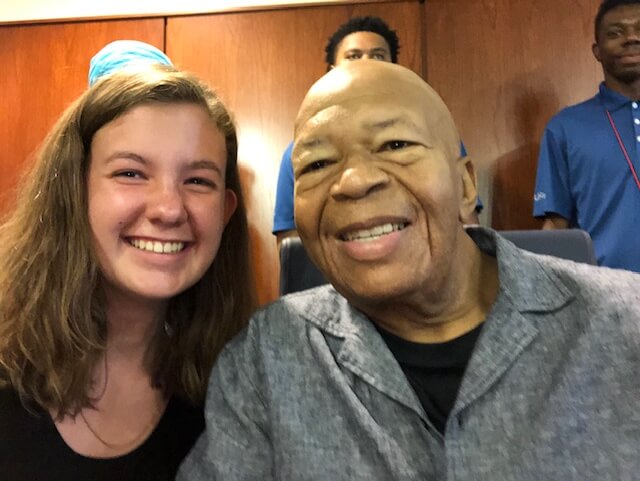 My family is personally involved in much of what makes Baltimore great. My daughter, Bri, is currently a summer intern at the Institute of Human Virology. I teach a course in Johns Hopkins’ Carey Business School. My wife, Jennifer, grew up in Baltimore and has a Masters from the University of Maryland’s School of Social Work. The three of us went to an O’s game just last week. The Glendening family loves Baltimore even if President Trump does not.