President Trump continued his attacks on Baltimore on Sunday, offering a second series of tweets that scolded the city for its crime rate and accusing Rep. Elijah Cummings (D), chairman of the House Committee on Oversight and Reform, of spending too much time investigating the White House and not enough time tending to the challenges of his Baltimore-based district.

The harshly worded missives drew widespread condemnation from Democrats, city officials, commentators and others, and they dominated social media all weekend. 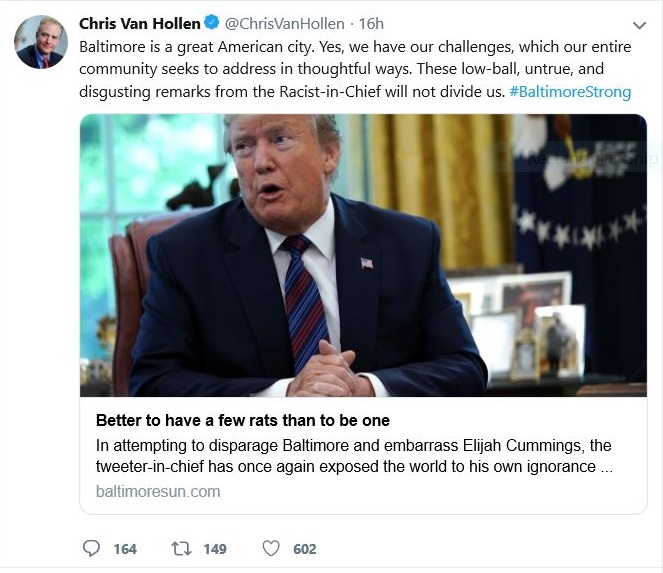 The Baltimore Sun editorial page opined that it’s “better to have a few rats than to be one.”

Even Baltimore Archbishop William E. Lori weighed in, telling WBAL-TV (Channel 11) News: “It saddens me to see Baltimore severely denigrated by the president. Baltimore is near and dear to my heart. It is hometown to over half a million people. It has its tragedies and challenges but also its strengths and opportunities. Many good people are working together to address Baltimore’s challenges and to build on its strengths. They deserve the support of elected officials and their fellow citizens.”

But not everyone found fault with Trump’s message.

“It was disheartening to hear the words the president used to describe the city,” she acknowledged in an interview Sunday. “However, there are some definite issues in this city.”

Numerous commentators noted over the weekend that Trump has a well-established pattern of reserving his harshest attacks on African-American leaders — such as President Obama, Reps. Cummings, John Lewis and Maxine Waters, and San Juan Mayor Carmen Yulín Cruz. They also cataloged anew the long litany of dog-whistle terms he uses for majority-minority communities.

But Wright, who ran for city council president in 2016 and is running for mayor in 2020, refused to go down that road — even as her town was under attack.

“My focus is not on what the president says and who he calls out,” she said. “In regards to Baltimore, let’s look at the facts, and let’s look at solutions.”

While she called the city “beautiful” — with “a culture and a heartbeat all of its own” — Wright said the city’s public safety, corruption and infrastructure problems speak for themselves.

“The deputy police commissioner was robbed at gunpoint. Mayor [Catherine E.] Pugh resigned,” she said. “We just made the list of worst-managed cities in the country. That doesn’t happen with care. That happens with systemic, generational neglect.”

If Cummings and Waters are going to spend the bulk of their time in the nation’s capital, Wright concluded, they better have things nailed down back in their districts.

“So the sentiment is, how do you come here where the power is, and talk about all the ills and the wrongs, when back home you haven’t taken care of home first?” she said.

Wright said the controversy kicked up by Trump’s tweets can lead to some good (“let’s take some of this charged energy right now around Baltimore and do something positive for this city”).

Did the president’s tweets offer that?

“None of them have been talking about solutions,” she concluded. “No one has been bringing solutions to Baltimore or these issues would not still be as they are.”